There's a Highly Classified Airline The Government Doesn't Want You To Know About, and They're Hiring 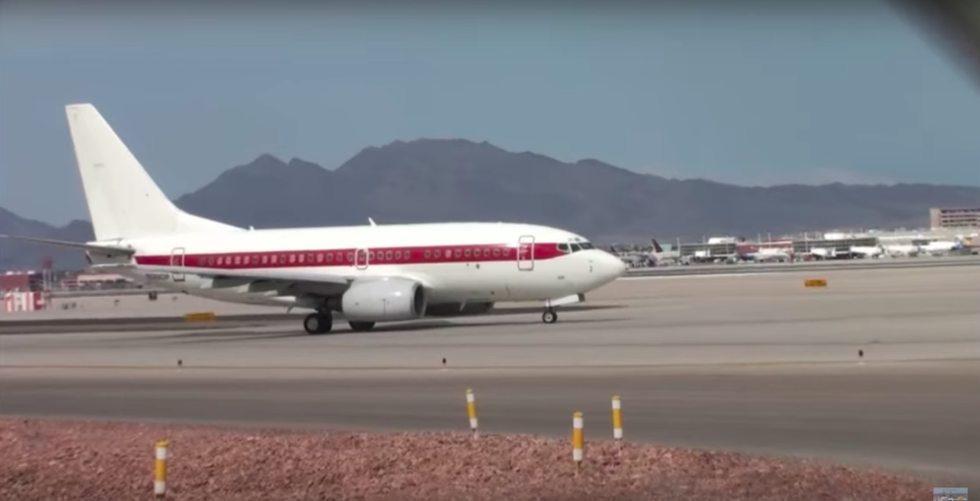 A Boeing 737-600 prepares to take off from Las Vegas's McCarran International Airport as part of Janet Airlines. (Screenshot via YouTube.)

Flight attendants don’t want their job to be interesting. When your workday ends up in the news because of a celebrity meltdown or because a passenger wants to try something creative like wearing all of his clothes at once, rather than pay a checked baggage fee, the skies don’t feel particularly friendly. The number of drunk airline passengers jumped 50 percent in 2017, sexual harassment and assault on the job is almost a given, and if the passengers aren’t misbehaving, their support animals are pooping and peeing on the plane or biting other passengers — so frequently that Delta is now changing its policies after seeing a 150 percent increase since 2015 in the number of support animals on planes — and a corresponding 85 percent increase in bad animal (and human) behavior.

Flight attendants who work for Janet, the top-secret, highly classified airline operated by the United States Air Force, however, may well enjoy quieter workdays. Janet Passengers tend to be military personnel and other government entities, and presumably their support animals are highly trained as well. Janet is said to stand for Just Another Non-Existent Terminal, and they are hiring.

The ideal candidate "must be level-headed and clear thinking while handling unusual incidents and situations (severe weather conditions, including turbulence, delays due to weather or mechanicals, hijackings or bomb threats)," according to the job posting. Another qualification: "Active Top Secret Clearance Highly Desired."

OK, so maybe it’s not such a quiet job. What’s it like to work for Janet? No one’s saying, because it is just that top secret. We do know that the airline operates out of a small, heavily guarded terminal in Las Vegas. They own a fleet of Boeing aircraft marked with a red stripe down the fuselage. And they fly to top-secret locations throughout the western US, including Area 51.

Area 51, formally called Homey Airport, is located deep in the Nevada desert. Although it has been the subject of intense speculation for decades, the CIA only acknowledged that the facility exists in 2013, when footage from satellites, drones, and mapping technologies were made available on the Internet, making it harder to conceal its existence.

What exactly is kept there? Some believe this is where the US government keeps aliens and their spaceships, although declassified reports obtained by journalists with the National Security Archive via the Freedom of Information Act deny all of that. Those reports, written by the CIA in 1992, wouldn’t be able to account for any alien activity from the past three decades, of course.

In January, passengers on a regular airline traveling over the Nevada reported seeing bright, flashing lights coming from something on the ground. Passengers speculated that their airline changed course after realizing the strange sighting captured the attention of the passengers. A passenger captured footage, and it joins a treasure trove of questionable YouTube videos about the mysterious Area 51.

Getting someone to take your alien sighting seriously is a challenging matter when so many reports look like, well, fake news. However, around half of Americans believe in aliens. The astronomy community is well-versed in dealing with speculation. When a star known as “Tabby’s Star” demonstrated a dimming and brightening aspect, for example, some people speculated that it was not a common star, but rather an approaching spaceship or an alien superstructure. After 1,700 people contributed to a Kickstarter campaign to raise money for a dedicated telescope to monitor Tabby’s behavior, scientists were able to closely observe the star from the Las Cumbres Observatory from March 2016 to December 2017. A new paper in The Astrophysical Journal Letters concludes that Tabby is unlikely to be controlled by aliens. Instead, dust was the culprit.

“Dust is most likely the reason why the star’s light appears to dim and brighten. The new data shows that different colors of light are being blocked at different intensities. Therefore, whatever is passing between us and the star is not opaque, as would be expected from a planet or alien megastructure,” LSU Department of Physics & Astronomy Assistant Professor TabethaBoyajian said.

That doesn’t mean that something isn’t out there, however, or that the US government isn’t keeping an eye on the skies. A secret Pentagon UFO program investigated alien sightings from 2007-2015, with bipartisan funding secured by Nevada Senator Harry Reid, who is known for his interest in space oddities, and also happens to be from Nevada, home to Area 51. The program seems to have turned up nothing of note. Or so they say.