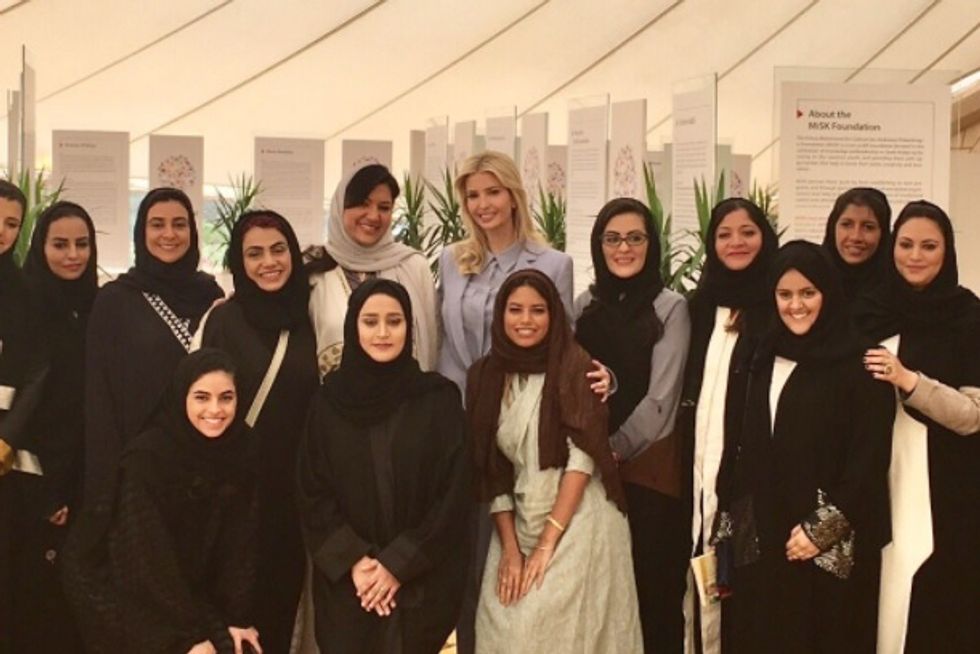 Donald Trump traveled to Saudi Arabia over the weekend on his first foreign trip as President, during which he attended an Arab Summit, gave a speech on Islam, and signed a $110 billion arms deal with Saudi Arabia.

Ivanka Trump accompanied her father on the trip and on Sunday attended a meeting with fifteen elite Saudi women at which it was announced that Saudi Arabia and the United Arab Emirates would donate $100 million to a women’s empowerment fund inspired by Ivanka.

"The need to empower and engage women transcends borders and cultures. Whether in the United States or in Saudi Arabia, women play a critical role in a movement that unites us all," Ivanka Trump said at the meeting.

The fund, which was first revealed by German Chancellor Angela Merkel back in April at the W20 Summit, will be run by The World Bank and will strive to empower women entrepreneurs around the world. World Bank President Jim Yong Kim said at the meeting on Sunday that he expected to announce a total of $41 billion in the fund at the Group of 20 summit in July.

The fund immediately drew comparisons to The Clinton Foundation and reminded many of the criticisms Donald Trump had hurled at Hillary Clinton for accepting money from oppressive regimes, such as Saudi Arabia.

During an October debate, Trump said "Saudi Arabia giving $25 million, Qatar, all of these countries. You talk about women and women's rights? So these are people that push gays off business - off buildings. These are people that kill women and treat women horribly. And yet you take their money."

After which Trump tweeted:

Norm Eisen, former ethics official for the Obama Administration, told NPR, "In my view foreign government donations to a fund run by a reputable international organization like the World Bank for a good cause are generally acceptable." But said "the hypocrisy is concerning, and the general miasma of corruption that surrounds all things Trump suggests some extra scrutiny here."

Richard Painter, former ethics adviser to the George W. Bush administration, added, "The Saudis could try letting women drive cars too. That would be good for entrepreneurship."