Ivanka Quotes Jefferson in Message of Support for Her Father, Legal Expert Shuts Her Down With Jefferson Quote of Her Own 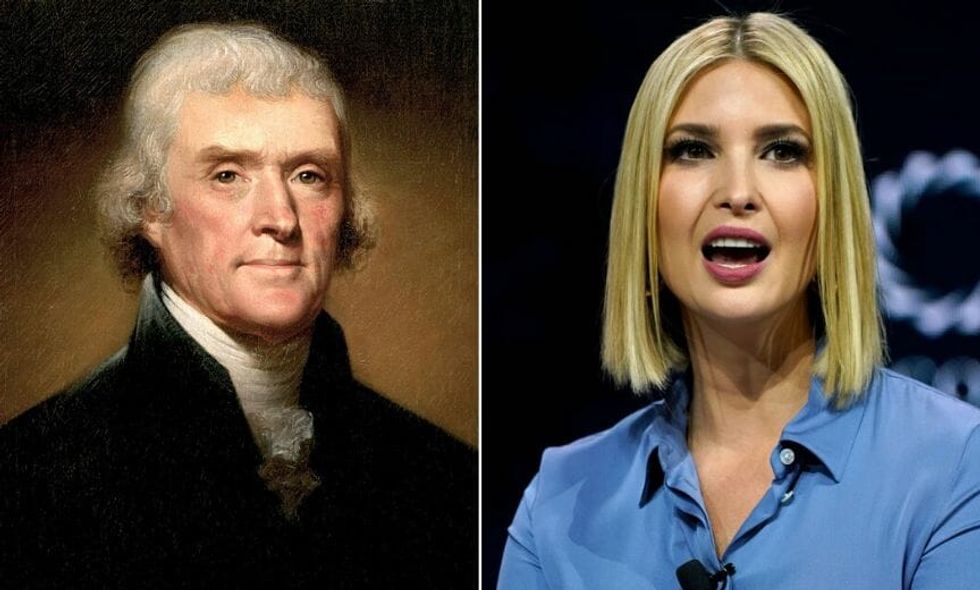 Though she didn't call out the impeachment inquiry directly, Ivanka invoked founding father Thomas Jefferson in an attempt to make a point.

Unfortunately for Ivanka, the point fell flat for a number of reasons.

For one, the accusation that Trump's opposition "invents where facts fail them," is absurd. The President routinely invents, and he's told over 13,435 lies since becoming President.

But legal analyst Susan Hennessey pointed out another Jefferson quote to expertly point out what Jefferson would think of Ivanka's role in the White House.

"The public will never be made to believe that an appointment of a relative is made on the ground of merit... nor c… https://t.co/UdBn0S0ziQ
— Susan Hennessey (@Susan Hennessey) 1572539428.0

Since ascending from fashion designer to a senior advisor position for her father, Ivanka has been at Trump's side for numerous talks with world leaders. Suspiciously, China granted five trademarks to Ivanka Trump's business amid trade negotiations between China and the United States. Ivanka's husband, Jared Kushner, works in the White House as an advisor as well.

People agreed that Hennessey's Jefferson quote was spot on.

Hennessey and others kept chiming in with more Jefferson quotes of their own.

"Shall any man be above Justice?...Shall the man who has practised corruption & by that means procured his appointm… https://t.co/sj0K5gtOT2
— Susan Hennessey (@Susan Hennessey) 1572539090.0

"It is error alone which needs the support of government. Truth can stand by itself." - Thomas Jefferson
— Esoteric Exposal (@Esoteric Exposal) 1572425104.0

"Thomas Jefferson" soon began trending on Twitter with people roundly condemning the parallels Ivanka drew between Jefferson and her dad.

The only thing Trump has in common with Thomas Jefferson is indifference to getting a woman’s consent. https://t.co/skTGJc99F6
— John Fugelsang (@John Fugelsang) 1572545215.0

Not a good look, Ivanka.