Is There an ISIS Attack Threat for the New York City Marathon 2017? 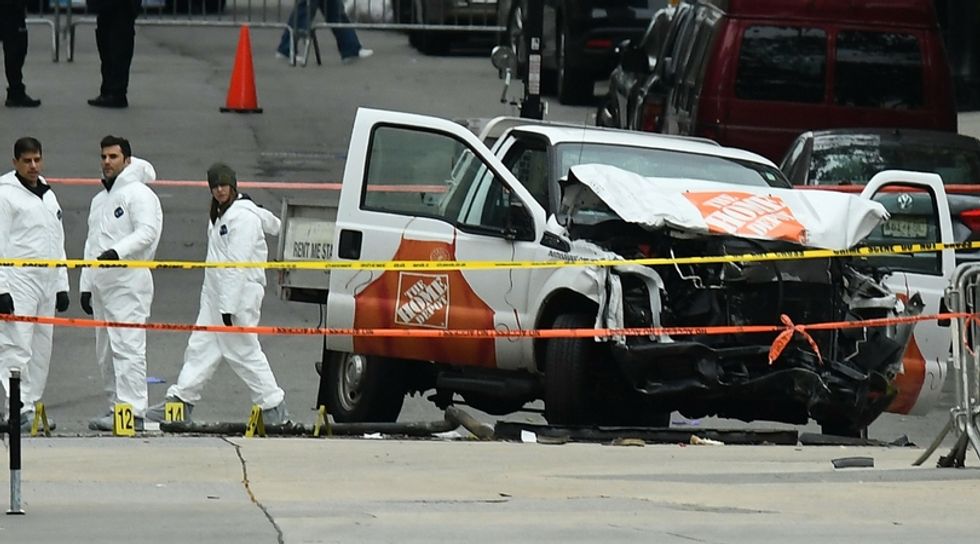 Investigators work around the wreckage of a Home Depot pickup truck a day after it was used in a terror attack in New York on November 1, 2017. (JEWEL SAMAD/AFP/Getty Images)

Following a car ramming attack in Lower Manhattan by Islamic State "lone wolf" Sayfullo Saipov, authorities fear an attack on the New York City Marathon. Has there been any indication that these fears are founded?

On Halloween afternoon, Saipov, an Uzbek immigrant who had been living in New Jersey with previous residences in Florida and Ohio, deliberately drove a rented Home Depot van down a bike path for a mile in the Tribeca area of Manhattan. After the attack, Saipov leaped out of the van with a BB or pellet gun and shouted, “Allahu akbar,” or, “God is great” in Arabic. According to NBC News, “Law enforcement sources said the man left a note in the truck claiming that he committed the attack for the Islamic State terrorist group.” The attack carried the hallmark of previous ISIS attacks throughout the United States and Europe.

In a recent ISIS publication, Saipov was referred to as a "soldier."

Similar car ramming tactics have been used by ISIS-sympathizers in the recent past.

In September, Edmonton police constable Mike Chernyk was allegedly hit and stabbed by 30-year-old Abdulahi Sharif, a Somali national and refugee, who then led police on a chase with a rental truck that ended up striking four pedestrians. According to the Washington Post, Sharif had an ISIS flag in the truck.

A month before the Canadian incident, a van hit several pedestrians after jumping the sidewalk in the La Rambla neighborhood of Barcelona, Spain. The attack was coordinated with other attacks throughout Spain, but the main perpetrator of the La Rambla attack was Younes Abouyaaqoub, a Moroccan national. The Islamist killed 23 in the van ramming attack.

New York City officials are tightening security on the famous race on Sunday to make sure a similar attack doesn't occur.

While there hasn't been any official threat made public, terrorism analyst Michael S. Smith II has stated that Islamic State-linked Telegram channels have been promoting multiple Asawirti Media channels, which may indicate "something is in the pipeline."

Asawirti Media is one of ISIS' largest propaganda networks. Asawirti Media became particularly active during the November 2015 Paris attacks and has been a key player in ISIS material distribution since then.