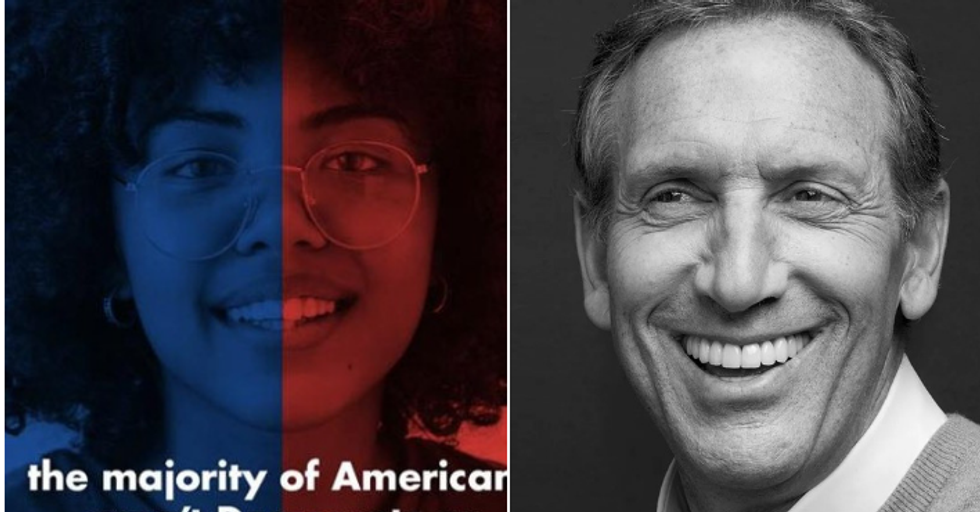 A recent ad for Howard Schultz is being soundly mocked for including a statement of truth on par with "water is wet."

Schultz—who has not officially announced his candidacy as an independent in the 2020 presidential race—is still deciding whether to throw his hat into the ring.

The billionaire former Chairman and CEO of coffee giant Starbucks announced in January that he left the Democratic Party and was exploring running for President.  Since then he has courted media and voters with a series of appearances and ads.

"The majority of Americans aren’t Democrats or Republicans,"

"...the majority of Americans are Americans."

Included was an image of the same slogan—without capitalization or punctuation—superimposed over a person of color with red and blue filters.

People are having fun at Schultz's expense on social media where screenshots of the Facebook ad were shared. This is not the first time the billionaire has been mocked online.

I don't know if Howard Schultz has settled on a campaign slogan yet, but "...the majority of Americans are American… https://t.co/cepbTEb2j6
— Josh Billinson (@Josh Billinson) 1555792463.0

I've crunched the numbers and can confirm that the majority of Americans are Americans
— Josh Billinson (@Josh Billinson) 1555792666.0

Several people mentioned tautology in reference to the ad.

The applicable definition of tautology is:

"a statement that is true by necessity"

Yes, the majority of Americans are Americans. That is a true statement.

In fact, one might even say all Americans are Americans.

Just like all cats are cats. That is how they get designated as a cat, or an American.

Several people thought the team behind Schultz might not have his best interest in mind.

whatever Howard Schultz is paying Burton & Schmidt is too much https://t.co/yKKehkNJGz
— Jamison Foser (@Jamison Foser) 1555804617.0

this is the worst shit i have ever seen. the majority of americans are americans?? literally what does that mean. https://t.co/MwULq0b2sW
— Travis Mockler (@Travis Mockler) 1555787809.0

People shared all of the Schultz messaging.

In addition to the majority of Americans being Americans...

"you don't have to choose sides to be on our side"

...and finally in the only slogan with proper punctuation and a somewhat salient message:

"America isn't broken, our politics are."

Schultz has as yet not revealed a timeline for when he will decide whether or not to pursue the presidency in 2020.