The wall is not holding. 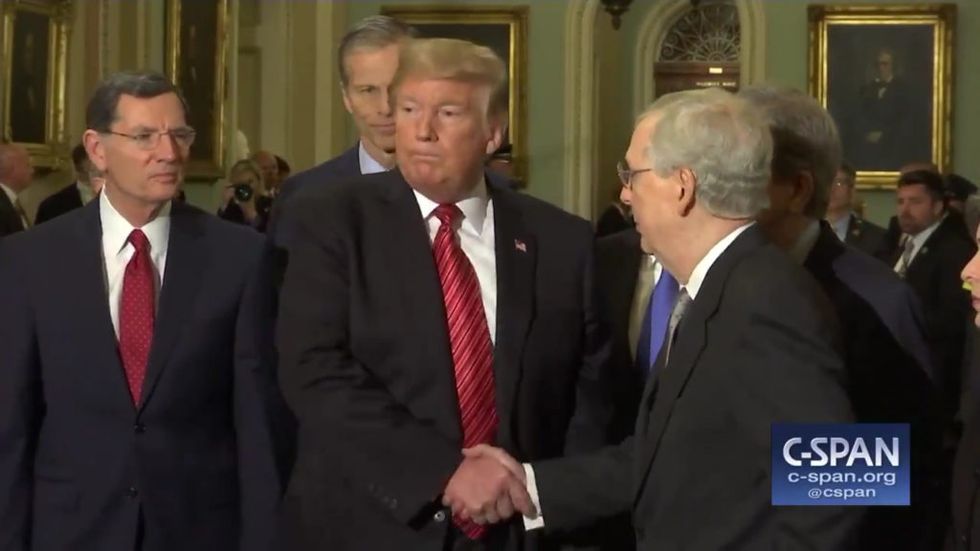 President Donald Trump continues to claim full support from the GOP for his border wall. However in addition to lacking the support of the one Republican Representative for a district on the southern border, 12 Republican members of the House of Representatives voted against Trumps government shutdown tactic.

Then Wednesday the GOP defectors climbed to eight. By Thursday a dozen House members of the GOP decided the Democrats had the right idea. Republican Senators also expressed support for reopening the government without wall funding.

But those facts did not deter the President from claiming full GOP support for his shutdown and his wall. And Senate Majority Leader Mitch McConnell—who blocked Democratic efforts to reopen the government from being considered by the Senate—echoed Trump despite facts proving otherwise.

If Trump's shutdown continues beyond Friday it becomes the longest in history. And some members of the GOP may not want that as their political legacy.

People are pointing that fact out.

While others are asking why, if the GOP believed a wall was vital, neither Mitch McConnell nor Paul Ryan pushed through the funding Trump wanted for his wall for the years the Republicans controlled the House, Senate and White House.

With consideration that the GOP never funded Trump's wall during the years the could have without any issue, lead many to posit the shutdown and supposed emergency manufactured for an entirely different purpose.

Do not be fooled: Trump and the GOP know *exactly* what they're doing with this shutdown. We break down their plan… https://t.co/mXlRJwRW3z
— Sarah Kendzior (@Sarah Kendzior) 1547057221.0

Can you guess why the #TrumpShutdown and the “national emergency” both suddenly happened now? I’ll give you three g… https://t.co/ef7zjTOVIi
— Jon Cooper 🇺🇸 (@Jon Cooper 🇺🇸) 1547220270.0

Pay attention to the long-term, cumulative damage of the shutdown, including the effect on the census. The Trump a… https://t.co/RN2QyrxLHl
— Sarah Kendzior (@Sarah Kendzior) 1547224041.0

People made certain to point out their opinions on Trump's government shutdown and GOP unity directly to the President.

Many responded to the President on Twitter calling him out on his threats of a national emergency.

And openly mocked the President's statements.

While others put credit for the shutdown squarely on the President.

Friday, January 11, marks the 21st day of Trump's government shutdown, tying for the longest in history.