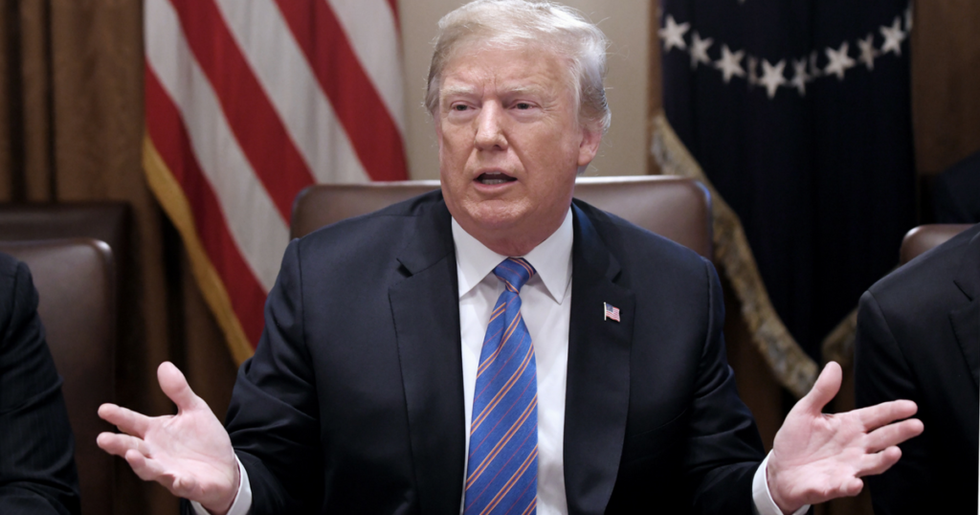 Google is correcting the president.

Earlier today, President Donald Trump accused Google of rigging results in its search engine to favor unflattering articles about him.

Trump did not clarify how exactly the situation would be addressed or where his citing of "96% of results" came from. However, the statistic presumably came from the right wing site PJ Media. The writer who originally cited the 96% statistic did so by googling "Trump news" then compared the results to an unsubstantiated chart that divided various media companies as "left" or "right." It was picked up by Lou Dobbs at Fox Business, which ran a segment on the false claim.

Trump later elaborated on the comments.

Google jumped into the fray with a statement denying such political rigging of search results:

When users type queries into the Google Search bar, our goal is to make sure they receive the most relevant answers in a matter of seconds. Search is not used to set a political agenda and we don’t bias our results toward any political ideology. Every year, we issue hundreds of improvements to our algorithms to ensure they surface high-quality content in response to users’ queries. We continually work to improve Google Search and we never rank search results to manipulate political sentiment.

According to Trump advisor Larry Kudlow, Trump's team is "taking a look" at regulating Google searches. In addition, the House Energy and Commerce Committee plans to hold a hearing on the matter early next month.

But Google isn't the only one calling out the president.

@realDonaldTrump Except that you are wrong. When we Googled Hillary we got Uranium one, pizza gate, and other bs.… https://t.co/VOIl1eNyP6
— CountessofNambia (@CountessofNambia) 1535481876.0

Trump now appears to be threatening to force Google to promote positive stories about him. The reason all the news… https://t.co/h0DgZMohCu
— Jonathan Riley (@Jonathan Riley) 1535482776.0

And it opened the door for some Google-themed jokes as well.

If you Google "Trump news" now, you get results about Trump complaining about Google being rigged against him. Now that's karma.
— JRehling (@JRehling) 1535480118.0

The allegations that entire institutions are rigged against him is no new accusation from the president.

Trump routinely claims that anti-Trump bias is rampant within every institution.

He's done it, possibly most famously, with the Mueller investigation:

And about the media:

The Fake News Media is going CRAZY! They are totally unhinged and in many ways, after witnessing first hand the dam… https://t.co/xCMRokHLNf
— Donald J. Trump (@Donald J. Trump) 1533044087.0

And about the media's coverage about the Mueller investigation:

Too bad a large portion of the Media refuses to report the lies and corruption having to do with the Rigged Witch H… https://t.co/BPrEjiXAIc
— Donald J. Trump (@Donald J. Trump) 1533473361.0

The Fake News Media is desperate to distract from the economy and record setting economic numbers and so they keep… https://t.co/oYffJ8CUtf
— Donald J. Trump (@Donald J. Trump) 1528144915.0

Now, the president appears to be accusing Google and even social media companies, whose manipulation played a large part in getting him elected. As the accusations become more and more far-fetched, many are beginning to think the walls are closing in.