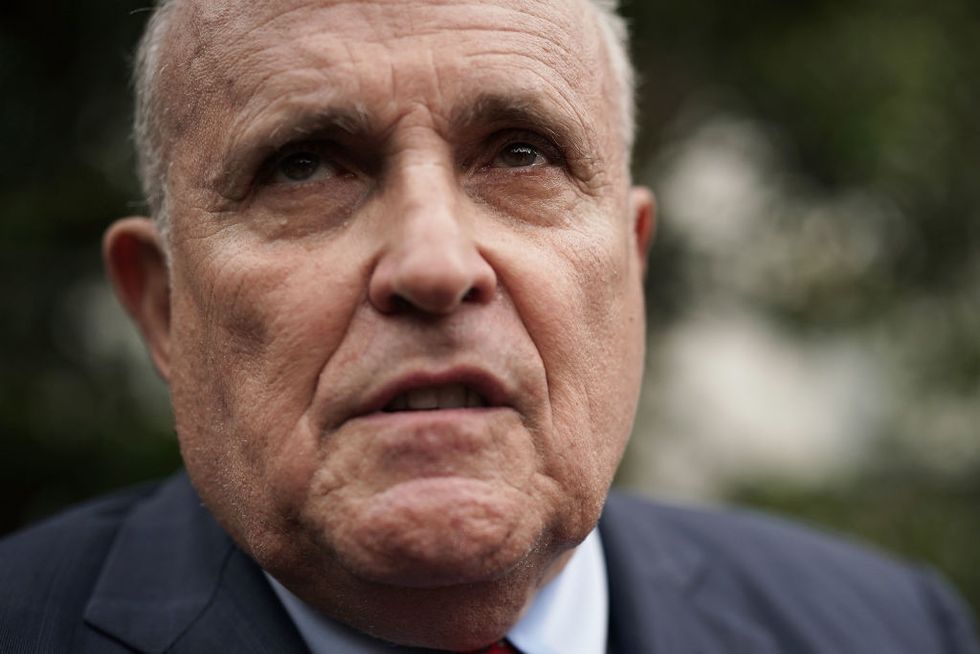 Rudy Giuliani, former New York City mayor and current lawyer for U.S. President Donald Trump, speaks to members of the media at the South Lawn of the White House May 30, 2018 in Washington, DC. (Photo by Alex Wong/Getty Images)

So you got a group there that's a lynch -- a lynching mob, so let them do their job." ~ Rudy Giuliani

In the latest bid to discredit the investigation of Special Counsel Robert Mueller, lawyer and spokesperson for President Donald Trump, Rudy Giuliani, appeared on Fox News' Hannity and referred to the investigators as a "lynching mob."

The comments come one day after a Fox News' legal analyst, former New Jersey Superior Court judge Andrew Napolitano, dismantled Giuliani's claims the investigation was "rigged" and "illegitimate." Napolitano stated in his Fox News segment that Trump's lawyer serves as a PR person and knowingly, based on his legal background, makes false claims.

Trump, and now Giuliani, use catchphrases and buzz words to better the president's standing in the court of public opinion. Terms like "spygate", "witch hunt" and "hoax" in addition to "rigged" and "illegitimate" are tossed about in interviews and on social media.

But is invoking the phrase "lynching" or "lynching mob" to describe the legal woes of a powerful White billionaire a step too far? To answer that, you have to know the history of lynching in the United States.

Lynching is the practice of murder by groups working outside the law. It is a form of lawless mob vigilantism and it has an ugly history steeped in racism.

The National Memorial for Peace and Justice, informally referred to as the National Lynching Memorial, opened in April, 2018. It serves to commemorate the victims of lynching in the United States in order to acknowledge a past of racial terrorism.

In the United States, lynchings rose after the Civil War following the emancipation of slaves.  They declined in the 1920s but were recorded well into the 1960s.

From 1882-1968, 4,743 lynchings were documented in the United States. Of these, 72.7 percent were African-American. Of the 27.3 percent of people of other races lynched in the American south, many were murdered for helping African-Americans or for being anti lynching.

The Russia investigation led by Special Counsel Mueller is not lawless however. It falls within the powers of the Justice Department as set forth by congress to appoint a special counsel. Mueller was duly appointed by the Republican led Department of Justice.

No vigilantes are involved in the investigation into Russian interference in the 2016 presidential election. The legally authorized and endorsed investigation has yielded indictments and plea bargains for those implicated.

Giuliani's choice to co-opt such a loaded phrase, "lynching mob", solely to bolster support for his employer is being met with disbelief and anger.

@CapehartJ The cavalier and irresponsible use of "lynch mob" by Giuliani is reprehensible and an insult to those wh… https://t.co/ENdBpszHOC
— NorNor (@NorNor) 1527775179.0

@mmfa I wonder why Giuliani is speaking about a lynch mob, when the people wearing white hoods are all supporting Trump?#Klan
— REALaltee (@REALaltee) 1527739754.0