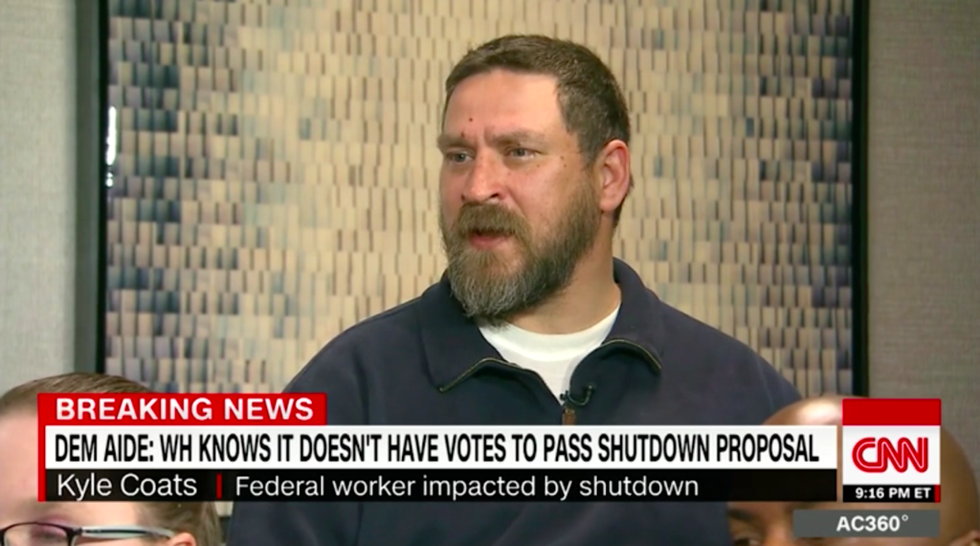 CNN spoke to federal employees working without pay or furloughed on Anderson Cooper 360. One employee—federal law enforcement officer Kyle Coats—shared he had run out of money.

Coats relayed how his lack of paycheck would keep him from visiting his daughter.

But one other revelation from Coats grabbed the attention of CNN correspondent Randi Kaye. The federal employee voted for President Donald Trump.

Kaye asked Coats how he felt about Trump now that he created the longest government shutdown in United States history. When asked if he thought the President could relate to his situation, Coats stated he did not feel Trump nor anyone in Congress could relate to people living paycheck to paycheck.

Coats added, in response to whether he agreed with what Trump was doing:

Kaye later asked if Coats felt betrayed by the man he voted for. The federal law enforcement officer answered:

People found plenty of blame to spread around for the situation these federal workers are in.

While some pointed to the middle class living paycheck to paycheck.

Some tried to blame the workers themselves for failing to save money or for not quitting their jobs. But others explained the critics were oversimplifying the issue.

But most pointed to the Trump administration and Congress as responsible for the situation. Fiscal year 2019 funding could have been approved any time after October 1,2017.

But a Republican controlled Congress and White House failed to approve the budgets for nine government departments. People did not blame the workers.

@AC360 @CNN @randikayeCNN The situation with these Govt. Workers is a nightmare. It is great to know that the membe… https://t.co/cWCLWuiBem
— Valeen McCahan (@Valeen McCahan) 1548134324.0

The government shutdown that President Trump stated he would be "proud" to create entered its 35th day on Thursday with no end in sight after the Senate failed to approve competing bills to reopen the government.