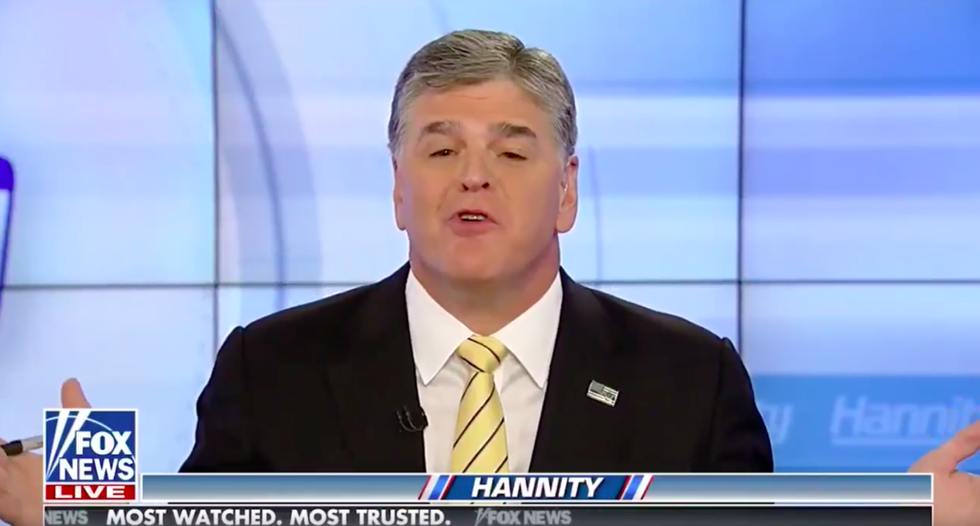 President Donald Trump denied reports that he ordered the firing of Robert Mueller last June, calling it "Fake news" to reporters who asked him about it in Davos, Switzerland where he's attending the World Economic Forum. A bombshell New York Times report revealed that White House counsel Don McGahn had refused to follow Trump's directive and threatened to quit rather than order the Justice Department to fire Mueller.

The president's denials come the same week he told the press that he looks forward to talking to Mueller––and while under oath.

His actions also, his critics contend, continue to lend credence to suspicions that he sought to obstruct the investigation into Russian interference, as The Atlantic's Natasha Bertrand laid out.

But those who tuned into Fox News stumbled into a different reality altogether as members of the network sought to discredit the investigation. Fox News host and Trump loyalist Sean Hannity found himself in an awkward position when his own network confirmed the story the president had already branded "fake news."

“The New York Times is trying to distract you,” Hannity told his viewers. “Our sources, and I’ve checked in with many of them, they’re not confirming that tonight… And how many times as the New York Times and others gotten it wrong?”

Hannity then opened up discussion with former Trump aide Sebastian Gorka and former Republican presidential candidate Herman Cain, who both questioned the credibility of the New York Times's report. But Hannity was forced to walk back his previous claims after Ed Henry, the network's chief national correspondent, not only confirmed the story, but revealed he spoke with a source who said former White House chief of staff Reince Priebus and chief strategist Steve Bannon believed Trump would fire the special counsel.

“All right, so we have sources tonight just confirming… that yeah, maybe Donald Trump wanted to fire the special counsel for a conflict,” Hannity admitted, before once again jumping to the president's defense. "Does he not have the right to raise those questions?” Then: "You know, we’ll deal with this tomorrow night,” before shifting to footage of a high-speed police chase in Arizona.

Speaking on Fox & Friends earlier this morning, hosts Steve Doocy, Ainsley Earhardt and Pete Hegseth mocked the seriousness of the report, at one point even holding up a copy of the New York Times while criticizing its use of anonymous sources. (The New York Times enforces rigorous guidelines regarding anonymous sources, guidelines enacted during the 2016 presidential election.)

“That happened last June. Do you — it’s something we have to tell you have about because it is a headline on The New York Times,” Earhardt said. “What do you think about that? Do you even care?”

During the same segment, the three hosts deflect, promising to move on to something you [the viewers] actually care about," namely the president's proposed border wall.

Most importantly, the hosts claimed, the New York Times report isn't really a "bombshell" as the "mainstream media" reports because even if the president threatened to fire Mueller, he didn't actually do it.

But trying to fire Mueller could be used as a larger point to build a case that the president attempted to obstruct justice. As Michael Schmidt and Maggie Haberman report on the front page of the Times, citing four anonymous sources:

Amid the first wave of news media reports that Mr. Mueller was examining a possible obstruction case, the president began to argue that Mr. Mueller had three conflicts of interest that disqualified him from overseeing the investigation. Mr. McGahn disagreed with the president’s case and told senior White House officials that firing Mr. Mueller would have a catastrophic effect on Mr. Trump’s presidency … Mr. McGahn was also concerned that firing the special counsel would incite more questions about whether the White House was trying to obstruct the Russia investigation. … After receiving the president’s order to fire Mr. Mueller, the White House counsel … refused to ask the Justice Department to dismiss the special counsel, saying he would quit instead …

“In the jigsaw puzzle of circumstantial evidence of criminal intent, these are more pieces that Mueller certainly would use,” white-collar criminal defense attorney Jacob Frenkel, who previously worked in the Office of Independent Counsel, told The Washington Post. “You build it around the timing.”