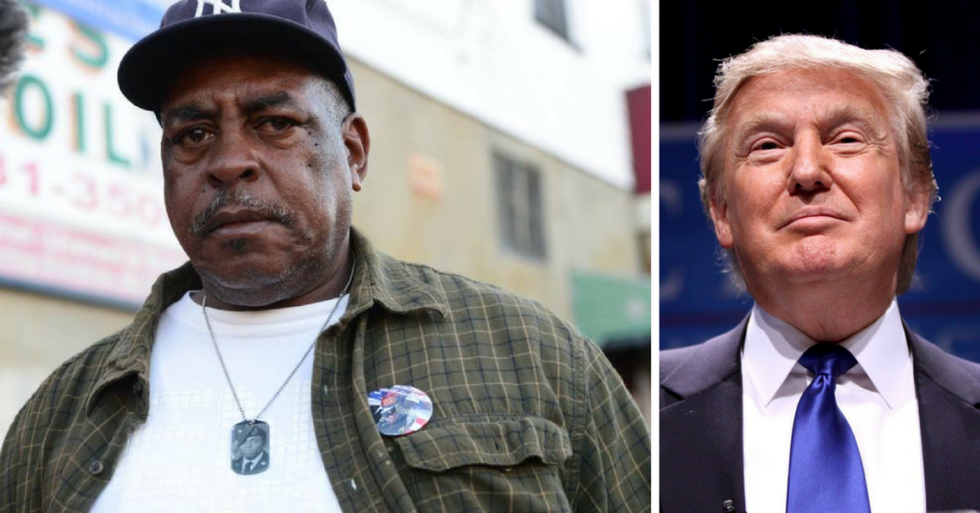 Euvince Brooks, the father of slain U.S. Army Sergeant Roshain Brooks, says he has not heard from the White House since his son's death in Iraq in August, despite President Donald Trump's claims that he had contacted every family of a service member who was killed. (“I think I’ve called every family of someone who’s died,” Trump told host Brian Kilmeade during an interview with Fox News radio, shortly after he delivered his first public remarks during a press conference on the deaths of four US troops killed in Niger, 12 days after the initial reports surfaced.)

“This guy is a liar,” Brooks said of Trump. “When I heard what he said, it got me so mad. I called my daughter and said, ‘Can you teach me to tweet? I wanna tweet at Trump.’ That’s the only way to reach him... He's lying. He didn't contact us. Nobody from the White House cares about my family and our grief. If they cared, they would say something to us.”

Brooks added that reports the president "disrespected" relatives of slain Army Sergeant La David Johnson on Tuesday enraged him. “I’m so upset,” he said. “He’s a damn disgrace to the White House. I’ve been here for 17 years. Presidents George Bush and Obama, none of them behaved like this guy. This guy is a damn lunatic.”

Brooks is not the only Gold Star parent to criticize the president. Chris Baldridge, the father of Army Sergeant Dillon Baldridge, said that Trump called him at his home in Zebulon, North Carolina, a few weeks after his son and two fellow soldiers were killed by an Afghan police officer on June 10. Baldridge says Trump offered him $25,000 and said he would direct his staff to establish an online fundraiser for the family, but neither happened.

"He said, ‘I’m going to write you a check out of my personal account for $25,000,’ and I was just floored,” Baldridge said. “I could not believe he was saying that, and I wish I had it recorded because the man did say this. He said, ‘No other president has ever done something like this,’ but he said, ‘I’m going to do it.’”

But the White House has done nothing else other than send a condolence letter from Trump. “I opened it up and read it, and I was hoping to see a check in there, to be honest,” Baldridge said. “I know it was kind of far-fetched thinking. But I was like, ‘Damn, no check.’ Just a letter saying ‘I’m sorry.’"

The White House, via spokeswoman Lindsay Walters, issued a denial shortly after receiving requests for confirmation from The Washington Post.

"The check has been sent," Walters said. "It’s disgusting that the media is taking something that should be recognized as a generous and sincere gesture, made privately by the President, and using it to advance the media’s biased agenda.”

A White House official confirmed to CNN that the president sent the check for $25,000 the same day The Washington Post reported he had promised Baldridge the money. A White House spokesperson said the check has been "in the pipeline" since Trump's conversation with Baldridge.

"The President has personally followed up several times to ensure that the check was being sent. As stated earlier the check has been sent," the spokesperson said. "There is a substantial process that can involve multiple agencies anytime the President interacts with the public, especially when transmitting personal funds. In this situation there were other agencies involved."