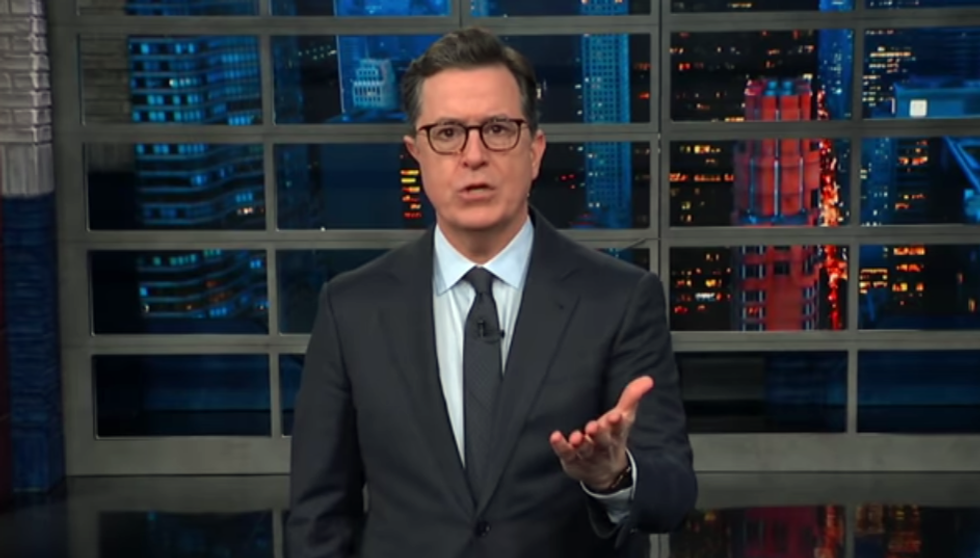 Stephen Colbert delivers his opening monologue on The Late Show on CBS December 6, 2018. (The Late Show/YouTube)

The family of former President George H.W. Bush went out of their way to provide a warm welcome to President Donald and First Lady Melania Trump at their family patriarch's memorial and funeral. President George W. and First Lady Laura Bush greeted the Trumps at Blair House Tuesday and as they entered the National Cathedral on Wednesday for his father's funeral services.

However, conservatives once again are crying foul over eulogies and tributes given to the elder Bush. Media analysts also discussed whether the eulogies were "anti-Trump."

Former Canadian Prime Minister Mulroney—whose time in office overlapped both the Reagan and Bush presidencies and who also spoke at President Ronald Reagan's funeral—gave one of the eulogies coming under fire. Mulroney and Bush were close friends and the former Canadian leader often traveled to the Bush family summer home in Kennebunkport, Maine to spend time with his friend.

In his eulogy, Mulroney stated:

"When George Bush was President of the United States of America, every single head of government in the world knew they were dealing with a gentleman, a genuine leader, one was that was established, resolute and brave."

Mulroney also brought up the North American Free Trade Agreement (NAFTA) that President Trump recently vowed to abolish. But rather than a dig at Trump, conservatives crying foul might recall that Mulroney and Bush worked on the agreement together and both claimed it as a legacy of their administrations.

Mulroney also acknowledged Bush's work on the Americans with Disabilities Act and the Clean Air Act. Both of those initiatives also are under attack by the Trump administration.

Body language says it all. Trump sitting like a petulant toddler who had his toy taken away. The other Presidents… https://t.co/UaNttelCeE
— Debbi Granruth (@Debbi Granruth) 1544029151.0

"His life code, as he said, was, ‘Tell the truth. Don't blame people. Be strong. Do your best. Try hard. Forgive. Stay the course'.”

So were Mulroney and Meacham taking a dig at President Trump as the President's supporters and media analysts claim?

Late night host Stephen Colbert presented his own interpretation of what happened at a funeral that the Bush family "assure[d Trump]... the focus would be on Bush’s life rather than their disagreements" according to a White House source.

"They even assured him that the choir would drown out the sound of other ex-presidents rolling in their graves."

Colbert went on to state:

"As soon as you start praising someone’s honesty, you’re automatically throwing shade at Donald Trump. I mean, Obama made Trump seem like a bad president just by sitting next to him."

Similar claims were made after the funeral of Senator, United States Navy combat veteran and Prisoner of War John McCain. The McCain family did not invite the man who frequently mocked McCain to his funeral, but no one who spoke of the virtues of McCain ever said Trump's name in their eulogies.

Yet Trump supporters still claimed it was not a proper funeral and instead politicized to "bash Trump." But people say that has less to do with the words of praise in the eulogies and more to do with President Trump's reputation.