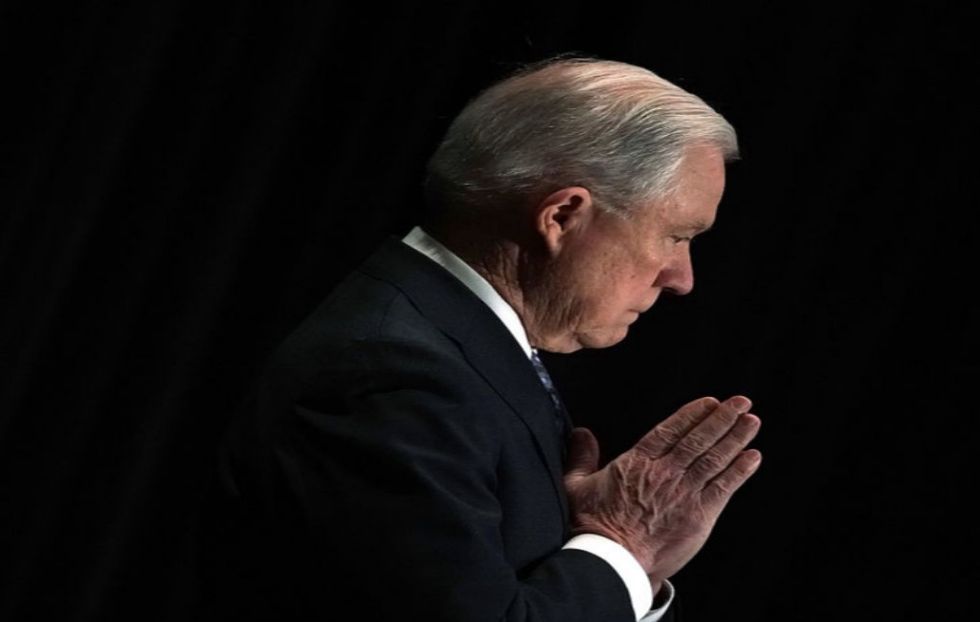 U.S. Attorney General Jeff Sessions listens as he is introduced during the Justice Department's Executive Officer for Immigration Review (EOIR) Annual Legal Training Program June 11, 2018 at the Sheraton Tysons Hotel in Tysons, Virginia. Sessions spoke on his intention to limit reasons for people to claim asylum in the U.S. (Photo by Alex Wong/Getty Images)

With public scrutiny over their zero tolerance policy at the United States southern border growing, the Trump administration scrambles to defend and deflect while not taking personal responsibility for a decision to separate over 1,000 children from their parents.

Their Republican allies in congress cited the non sequitur Flores settlement as the reason for the family separations. However President Donald Trump's attorney general, Jeff Sessions, found a different reason for the actions of his administration: the Bible.

On Thursday, Sessions referred those who would question the Justice Department's decision to the Bible. His office, under direction from the president, announced in May it would treat all who enter the U.S. without a proper visa as criminals to be prosecuted instead of referring them to civil court for immigration proceedings.

This policy change includes those voluntarily turning themselves in and requesting asylum from abuse and tyranny. Because all now fall under criminal procedures instead of civil, the Justice Department is seizing their children and turning the minors over to the Department of Health and Human Services (HHS).

HHS must then find placement for all of the additional children flooding their system in shelters turned overcrowded detention centers.

And the Bible justifies it, according to Sessions. But one man who has dedicated his life to a parochial, not secular, profession calls Session's justification "disgraceful."

Father James Martin, a Jesuit priest, author and lecturer took exception to these words from Sessions:

"I would cite you to the Apostle Paul and his clear and wise command in Romans 13, to obey the laws of the government because God has ordained the government for his purposes," Sessions said during a speech Thursday.

Orderly and lawful processes are good in themselves. Consistent and fair application of the law is in itself a good and moral thing, and that protects the weak and protects the lawful."

However there is no actual law in play. Trump refers often to a "horrible law" that forces his hand at the border, but the claim is false. It is an internal policy decision.

For Attorney General Sessions, Father Martin had this response:

Father Martin also added some Biblical references for Sessions and the Trump administration to follow to his Twitter thread.

Biblical references for secular activities in a country with no official religion cause many to give pause, but Sessions is not alone in citing the Bible as justification. Republicans have quoted 2 Thessalonians — if a man will not work, he shall not eat — to justify cuts to food assistance programs affecting children, the elderly and the working poor.

But perhaps even more troubling to Biblical and historical scholars is when the reference Sessions chose to cite has been used before in United States history.

So those who sided against the United States independence from Britain also used Romans 13 to justify obeying and remaining under King George. But the other is worse.

...in the 1840s and 1850s, when Romans 13 is invoked by defenders of the South or defenders of slavery to ward off abolitionists who believed that slavery is wrong. I mean, this is the same argument that Southern slaveholders and the advocates of a Southern way of life made."

Later on Thursday, Sarah Sanders was asked to clarify the administration's stance on a Biblical justification for separating families fleeing violence at the United States border. Sanders also gave the same response as Sessions: the Bible says obey laws.

However Father Martin again rebuked the Trump administration for their, in his expert opinion as a religious professional and not a secular political appointee, misuse of the Bible.

The Jesuit priest once again shared his lecture on the Bible and refugees for the Trump administration to review.

The Twittersphere found many who shared Father Martin's sentiments on the Trump administration citing the Bible.

@JamesMartinSJ Not to mention we are a nation built on our constitution, not on the Bible. So while St. Paul’s word… https://t.co/rZ9MiDvMa1
— Furious Optimist (@Furious Optimist) 1529009919.0

@InglouriousGwen @saraconway @JamesMartinSJ I will third and point out that we are not a theocracy, no matter how many wish it so.
— Lynn Heilmann (@Lynn Heilmann) 1529015168.0

@JamesMartinSJ Too many people treat religion like a bus: they will only ride it when they think it's going in their direction.
— George Sudikatus (@George Sudikatus) 1529009408.0