The EU Just Announced Which U.S. Products They Intend to Slap Tariffs on, and They're American AF

Striking right at the heart of Trump Country. 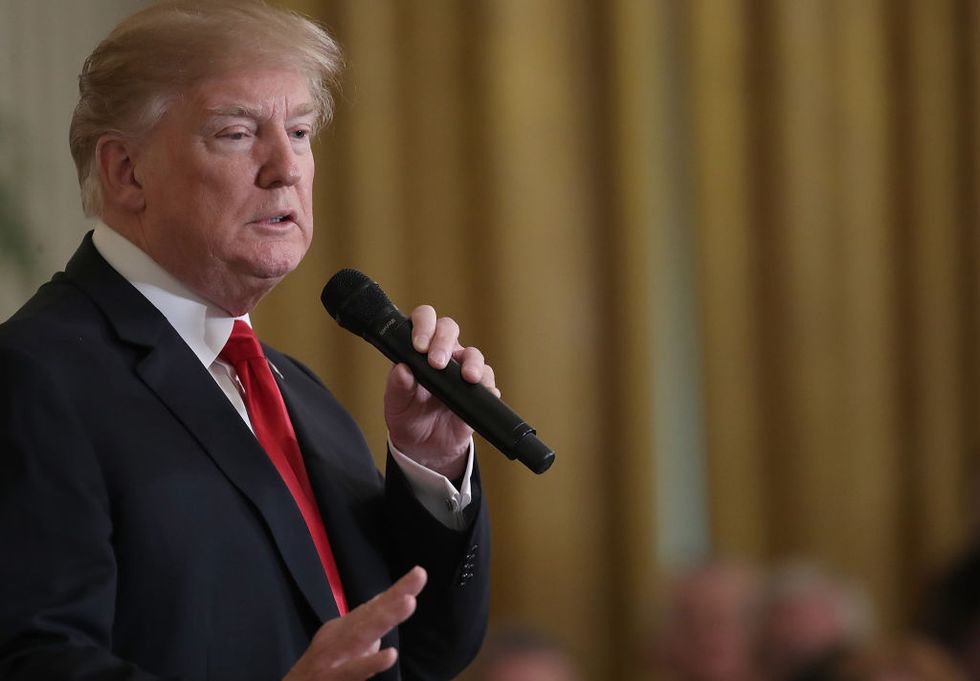 The European Union announced it would slap the United States with tariffs on products like Harley-Davidsons, Kentucky bourbon and blue jeans if President Donald Trump goes ahead with a plan to place tariffs on steel and aluminum imports.

According to The Hill, the "products listed by Juncker appeared to target industries based in the home states of congressional leaders":

“None of this is reasonable, but reason is a sentiment that is very unevenly distributed in this world,” said Jean-Claude Juncker, the president of the European Commission, who made the remarks to the German news media in reaction to Trump's proposed tariffs:

We strongly regret this step, which appears to represent a blatant intervention to protect U.S. domestic industry and not to be based on any national security justification. The EU has been a close security ally of the U.S. for decades. We will not sit idly while our industry is hit with unfair measures that put thousands of European jobs at risk.

Nor was Juncker's denunciation the only one to come to light after Trump, in a meeting with industry executives, announced his intention to impose penalties of 25 percent on steel imports and 10 percent on aluminum imports from all countries.

Australia’s trade minister Seven Ciobo said the nation would seek an exemption from Trump's proposed tariffs. He also issued words of caution, saying that the president's retaliatory measures could pose detrimental effects to the global economy.

If we see a break out of action and reaction from major economies the only thing that will arise from that will be a slow down of economic growth and over time if it got bad enough, ultimately we could see for example, a recession, and we know the consequent impact of that,” he said.

"Donald Trump is putting jobs at risk on both sides of the Atlantic," Rickhuss wrote. "Thousands of steelworkers across the country voted for Brexit on the promise it would deliver a new era of international trade.”

Rickhuss also called on Prime Minister Theresa May to seek an exemption from the president's tariffs and "secure the assurances we need."

The PM talks of a ‘special relationship’ with the US and we now need to work together to ensure the high quality st… https://t.co/vfDXN5uB1M
— Roy Rickhuss CBE (@Roy Rickhuss CBE) 1519979230.0

During a press conference in Montreal held just before Trump’s announcement, Prime Minister Justin Trudeau said thatCanada and the United States “have a relationship unlike any two countries in the history of the world.” He did, nonetheless, criticize President Trump's decision.

“The idea that Canada could be a trusted Five Eyes partner, collaborating on a broad range of security and defence issues on a daily basis, but seen to be somehow not a trusted partner to sell steel is a little bit silly, to be frank,” Trudeau said. He added that he is looking forward to “a positive outcome.”

"Our economy is a lot more diversified than it ever has been but we still have hundreds of manufacturers in steel that employ 10,000 people in Hamilton,” said Keanin Loomis, president and CEO of the Hamilton Chamber of Commerce. “That represents about $2 billion in local procurement, and conservatively that means there are about 30,000 other jobs that are reliant upon the steel industry here in Hamilton. Just in Hamilton.”

Loomis continued: “Now we are going to have to harden our borders, and make sure that the government is much more proactive in preventing this steel from finding a home in Canada and threatening our domestic market."

Trump has often attacked China, accusing the nation of being "unfair" to the United States on trade.

Li Xinchuang, vice chairman of the China Iron and Steel Association, went further. “I feel Trump’s decision is stupid. It will only make the U.S. steel industry, which is already 10 years behind China, more left behind," he said during a phone interview. “Trump’s decision does no good to everyone except a few American steel enterprises. Trump is a businessman, and he should understand win-win. But he took such extreme action.”

Speaking to reporters in Paris, Bruno Le Maire, the French economy minister, decried the tariffs, saying they would have a “major impact” on the European economy and on numerous French companies. The steel and aluminum industries are in a “particularly fragile” situation, he observed.

American authorities know this perfectly well,” he said, referring to certain countries which practice “dumping” and offer “massive subsidies” that distort trade. "That is the topic that needs to be addressed, and not another.” He added, “A trade war between Europe and the United States will only result in losers.”

Steffen Seibert, a spokesman for the German chancellor, Angela Merkel, said the government "rejects" the tariffs, warning that Trump's proposal could ignite a global trade war.

In a statement of his own, Hans Jürgen Kerkhoff, president of the German Steel Federation, urged the bloc to take action, saying: “These measures clearly violate the rules of the World Trade Organization. If the E.U. does not react, our steel industry will pay the bill for U.S. protectionism.”

Foreign Minister Sigmar Gabriel says he's viewing Trump's proposal with “great concern," adding: “Such a sweeping blow from the U.S. would reverberate around the world, but our exports and jobs would be among the hardest in the world hit.”

A Japanese trade official echoed Germany's warning that the proposed tariffs could result in a global trade war.

“If trade restrictions are being put in place one after another, you’re opening a Pandora’s box and that’s the scariest part,” said Kosei Shindo, head of the Japan Iron and Steel Federation.

Tokyo, meanwhile, defended Japan's aluminum and steel exports. “We don’t think imports from Japan, an ally, have any effect at all on U.S. national security,” Economy, Trade and Industry Minister Hiroshige Seko told a news conference.

MEANWHILE, BACK IN THE UNITED STATES...

The president's proposal would have adverse effects on the American economy, a violation of the numerous promises he has made to his core supporters.

Trump's announcement prompted Electrolux, a global maker of household appliances, to announce it would delay a planned $250 million investment to expand and modernize a factory in Tennessee.

We’re concerned about the impact that the tariffs could have on the competitiveness of our U.S. operations,” the company said in a statement, noting that it would wait for more details about Trump's proposed tariffs before making a final decision.

Trump continues to attract heated critcism for several tweets he sent out earlier today in which he claimed that trade wars "are good, and easy to win."

"When a country (USA) is losing many billions of dollars on trade with virtually every country it does business with, trade wars are good, and easy to win," he wrote. "Example, when we are down $100 billion with a certain country and they get cute, don’t trade anymore-we win big. It’s easy!"

The president appeared to ignore much of the controversy surrounding his announcement. Instead, he doubled down on his belief that "We must protect our country and our workers."

Later, he seemed to offer justifications for his decision, writing: "When a country Taxes our products coming in at, say, 50%, and we Tax the same product coming into our country at ZERO, not fair or smart. We will soon be starting RECIPROCAL TAXES so that we will charge the same thing as they charge us. $800 Billion Trade Deficit-have no choice!"

According to two officials who spoke to NBC News on condition of anonymity, Trump's "decision to launch a potential trade war was born out of anger at other simmering issues and the result of a broken internal process that has failed to deliver him consensus views that represent the best advice of his team."

In the words of one official, the president became "unglued."