Tardigrades Can Survive Almost Anything, and Now We Know How 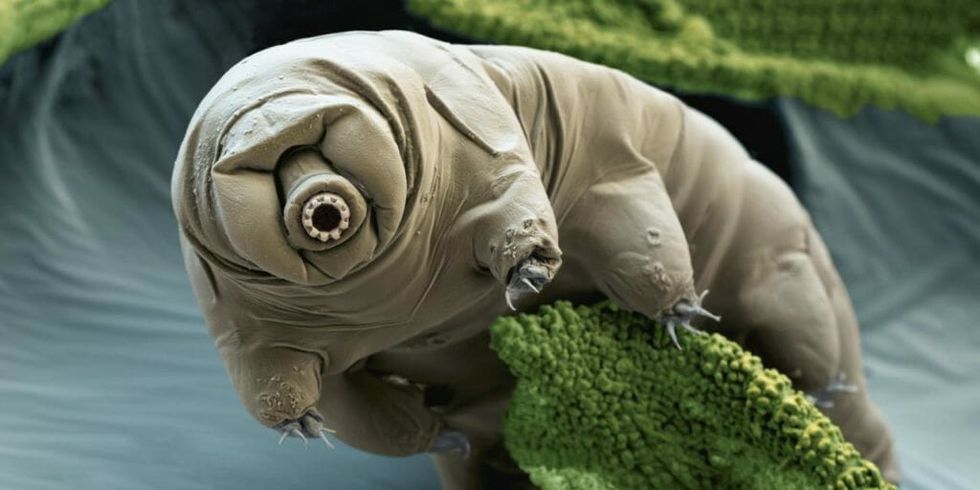 Water bear. Coloured scanning electron micrograph (SEM) of a water bear (Paramacrobiotus craterlaki) in moss. Water bears (or tardigrades) are tiny invertebrates that live in aquatic and semi-aquatic habitats such as lichen and damp moss. Paramacrobiotus craterlaki is a carnivorous species that feeds on nematodes and rotifers. Water bears are found throughout the world, including regions of extreme temperature, such as hot springs, and extreme pressure, such as deep underwater. They can also survive the high levels of radiation and vacuum of space. Magnification: x330 when printed at 10 centimetres wide.

Tardigrades, or water bears, are tough little creatures. They’re only half a millimeter long fully-grown, but they can live through almost anything: temperatures as low as -458 degrees Fahrenheit or as high as 300 degrees, pressures six times greater than those in the deepest ocean trenches, extraordinary amounts of radiation, even the vacuum of space. Last month, researchers in Japan published an analysis of the entire genome of one of the most resilient tardigrade species.

In the course of their research, geneticist Takekazu Kunieda and his colleagues from the University of Tokyo found some of the lucky genetic tricks that tardigrades have evolved to keep them safe in extreme environments. Because it is easier to study the processes happening in tardigrade cells when the genes are housed within mammalian cells, the researchers cultured human cells to produce bits of the tardigrade genome. Then, they could manipulate the cells to figure out which genes give the tiny animals their impressive resistance.

One of the tardigrade’s best survival tricks is called cryptobiosis: basically, it’s an extreme form of hibernation where all of its metabolic functions stop almost entirely. When a tardigrade is in this state, suspended between life and death, it can survive almost anything. It can be dried out to 3% of its normal water content and come right back to life with just a splash of water.

In living creatures, dehydration can wreak havoc among cells, even ripping apart DNA. Tardigrades, though, have a protein called Dsup which holds the DNA together under the stress of drying out. When Kunieda and his team discovered this protein in the tardigrade genome, they also found that it protects the DNA from radiation, particularly X-rays. “Tolerance against X-ray is thought to be a side-product of [the] animal's adaption to severe dehydration,” said Kunieda.

Ingemar Jönsson, who studies tardigrades at Kristianstad University in Sweden, called this discovery “highly interesting for medicine” - in the future, it may help

geneticists make human cells more resilient. “Protection and repair of DNA is a fundamental component of all cells and a central aspect in many human diseases, including cancer and aging,” said Jönsson. The protective potential of tardigrade proteins could be particularly helpful for people undergoing radiation therapies or astronauts who are exposed to high amounts of radiation on long journeys in space.

Tardigrades’ tolerance of being dehydrated might be even more important: “If dehydration-tolerance can become transferable, I hope it will transform the way we preserve various biological materials, including cells, crops, meats, fish, and so on,” speculated Kunieda.

Unfortunately, the genetic manipulations required to transfer such a trait aren’t so easy. While the researchers were able to transfer Dsup’s protective capability to a few cells, it’s not yet possible to transfer it to a whole person, or even a plant. It might not be possible for decades to come, but understanding where the tardigrade’s toughness comes from is a good start.

Because the tardigrade can survive in so many different sorts of extremes, it’s almost inevitable that it has a few more tricks up its sleeve. “We are really just at the beginning of exploring the genetic treasure that the tardigrade genome represents,” said Jönsson. Maybe we’ll pick up a few tips for toughness along the way.