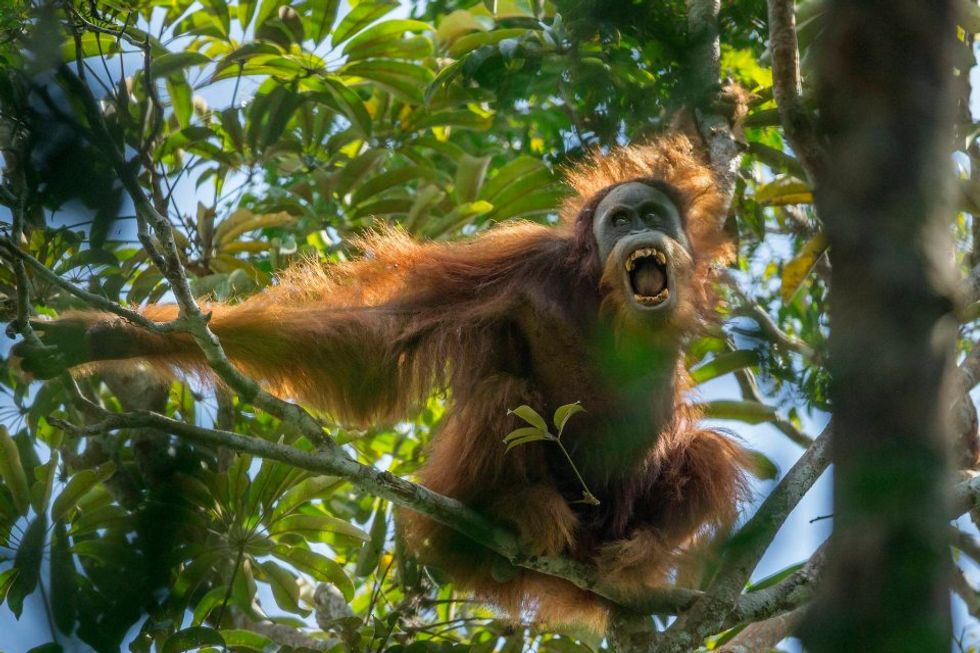 On November 2, scientists revealed they’d identified an entirely new species of orangutan, which is critically endangered and in vital need of protection. Living solely in the secluded Batang Toru forest within Northern Sumatra, Indonesia, the population of Pongo tapanuliensis, or Tapanuli orangutans, hovers around 800, making it the rarest great ape species alive.

Imposing and magnificent, orangutans are the largest tree-dwelling mammals; their name means “person of the forest” in Indonesian and Malay. They tend to be somewhat solitary creatures, swinging from branches, eating fruit, and sleeping while hoisted high in the forest canopy. Previously, scientists classified all orangutans into one of two known species, both also critically endangered: Borneos and Sumatrans. First reported in the 1930s and re-discovered in 1997, orangutans living in Batang Toru were curiosities within the scientific community. Most scientists assumed they were Sumatrans, despite marked behavioral and genetic differences within the population: it wasn’t clear that any of these merited calling the apes a new species.

In 2013, that would all change: that year, researchers gained access to the first skeleton they’d seen from a Batang Toru-native, a male ape they called Raya. Thought to have died due to human-inflicted injuries, Raya provided the first opportunity for scientists to examine an intact skeleton from this largely isolated orangutan population. The ensuing investigation of his physical traits and genetic material revealed powerful-enough differences to constitute classifying the ape as a different species entirely.

After years of research and discussion, an international team of scientists examining Raya published their findings in Current Biology. Specifically, they found that, when compared with 33 adult male orangutan specimens, Raya differed in skull and teeth shape, and that his genome varied significantly from those of 37 other orangutans. Researchers deemed that these differences, taken together, warranted granting a new species designation: thus the Batang Toru-dwellers were classified as Tapanuli orangutans.

Genomic analysis indicated that Tapanulis are genetically closer to Bornean than to Sumatran orangutans, despite their close physical proximity to Sumatran populations. Researchers believe that Tapanulis physically separated from Bornean orangutans around three million years ago, and evolved into a distinct species about 700,000 years ago.

Surprisingly, the newly-named species may boast the most ancient lineage: "The Batang Toru orangutans appear to be direct descendants of the initial orangutans that had migrated from mainland Asia, and thus constitute the oldest evolutionary line within the genus Pongo," said University of Zurich’s Alexander Nater, a co-author of the study. “It's amazing that the deepest genetic split between living orangutans has been overlooked until now," notes Kris Helgen, a mammalogist at Australia’s University of Adelaide, who was not affiliated with the study.

To Helgen and other experts, classifying Tapanulis as a different species is a vital first step in helping protect this critically endangered population. "Many overlooked species, like Pongo tapanuliensis, are endangered," Helgen says. "It is urgent and crucial to accurately document them and give them scientific names, so they can be recognized as distinctive, studied in greater depth, and protected from extinction." With fewer than 800 Tapanuli orangutans estimated to live in the wild, further fractured into three small groups, this species has a particularly vulnerable head count; in comparison, Bornean orangutans number approximately 55,000, while Sumatrans number about 14,000.

Conservation biologist Matthew Nowak of the Sumatran Orangutan Conservation Programme touched upon several challenges for the newly found species. In addition to the threat of hunting, “Significant areas of the Tapanuli orangutan’s range are seriously threatened by habitat conversion for small-scale agriculture, mining exploration and exploitation, a large-scale hydroelectric scheme, geothermal development and agricultural plantations.”

To University of Zurich evolutionary geneticist Michael Krützen, who has studied these complex creatures for over a decade, the next steps are clear: “We must do everything possible to protect the habitats in which these magnificent animals occur, not only because of them, but also because of all the other animal and plant species that we can protect at the same time.”

Despite the challenges looming ahead, this fragile population provides hope as well. Mused Erik Meijaard of the Australian National University, who helped author the study: "If after 200 years of serious biological research we can still find new species in this group, what does it tell us about all the other stuff that we are overlooking: hidden species, unknown ecological relationships, critical thresholds we shouldn't cross?"

Above all, the discovery of Tapanuli orangutans sheds light on how much we’ve yet to learn about our planet’s wealth of complex creatures.