Jurassic Sea Monster Unearthed – Could It Be a New Species? 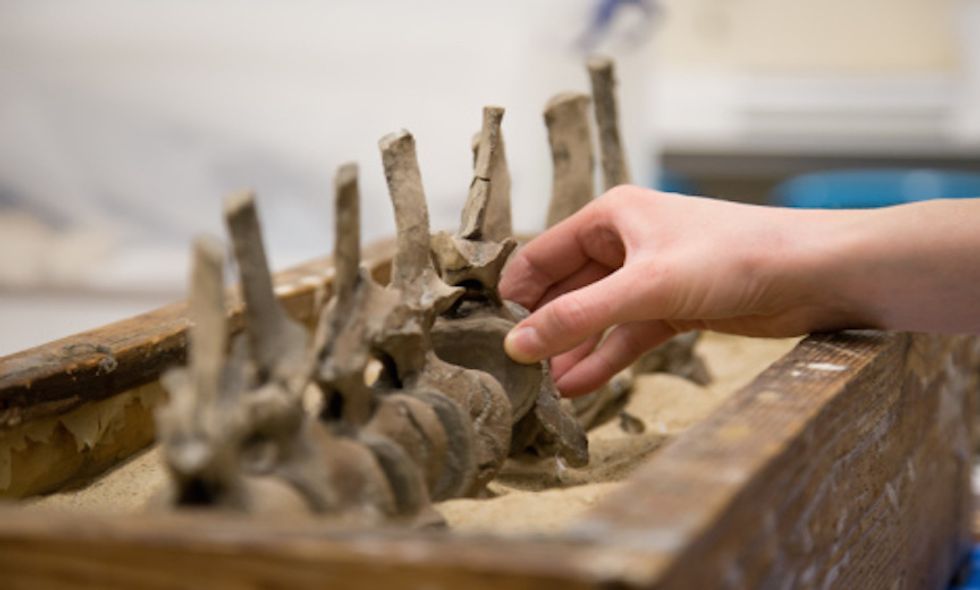 After 165 million years, a rare plesiosaur skeleton has been unearthed by paleontologists in eastern England.

A team of paleontologists from the Oxford Clay Working Group dug up more than 600 pieces of bone over the course of four days in a quarry in the English town of Cambridgeshire. Building product manufacturer Forterra, which owned the quarry, donated the bones to the Oxford University Museum of Natural History.

Scans of the skull, still buried in clay. Credit: Source.

“I’d never seen so much bone in one spot in a quarry,” said Dr. Carl Harrington from the Oxford Clay Working Group, who was the first to notice a small piece of bone sticking up out of the clay in 2014. “As I was digging amongst the wet clay, the snout of a plesiosaur started to appear in front of me. It was one of those absolute ‘wow’ moments—I was the first human to come face to face with this reptile.”

The 18-foot skeleton is nearly complete, but is missing

its hind flippers and parts of its fore-flippers. In life, the plesiosaur, dubbed Eve, would have had an eight-foot-long neck, a barrel-shaped body, four flippers and a short tail.

Despite its awkward shape, the plesiosaur is thought to have been like today’s dolphin, chasing and corralling its prey. Given its large chest and long neck, it is unclear how it would have been able to catch fast-moving fish –a topic which has been the subject of debate among scientists since the first plesiosaur skeleton was discovered nearly 200 years ago.

Early scans of the skull, which is still set in clay and remains to be excavated, have given the first hints that the plesiosaur may be a previously unknown species. In particular, this plesiosaur has some anatomical features that have previously only been seen in smaller species.

“Part of the study will be to determine whether this is a known or new species of plesiosaur,” said a spokesperson from the museum. “Early indications suggest that it might be a species new to science, but more investigation is needed before we will know for sure.”

Over 600 bone fragments were unearthed during the excavation. Credit: Source.

The plesiosaur will be reconstructed so it can be hung and displayed at the museum.