One Nation, Under Water: Climate Change and Its Terrible Consequences For One Small Country 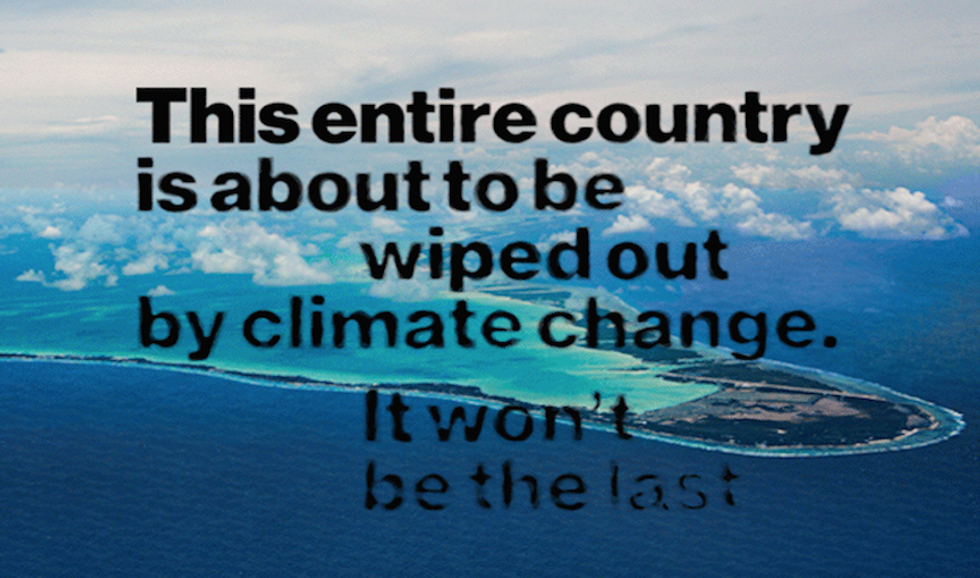 The island nation is poised to fall victim to the ocean around it, as scientists predict that many of its 33 islands will be completely submerged within the next hundred years due to climate change-induced sea level rise.

“We may be beyond redemption,” says Anote Tong, the nation’s president. "We may be at the point of no return, where the emissions in the atmosphere will carry on contributing to climate change, to produce a sea level change so in time our small, low-lying islands will be submerged."

Tong’s fears are not exaggerated. The highest land in Kiribati barely reaches 1.8 meters (6 feet) above sea level, a height many climate change scientists say will be easily swallowed up by rising oceans.

“We will be submerged by the end of the century, as things stand right now,” Tong foresees. This means that Kiribati’s 103,000 citizens will need to either adapt to rising waters, or flee the country, becoming the first climate change refugees.

An Issue of Human Survival

While climate change represents a looming threat to Kiribati’s future, it is the nation’s current environmental woes that are accelerating its sinking lands.

Although Kiribati is expansive in terms of its area, the country itself has very little land mass. This makes agriculture difficult, and has forced citizens to turn to unsustainable, but high output, subsistence and monoculture farming in recent years to maintain their livelihoods.

These practices have weakened the agricultural yield of Kiribati’s soil, and permanently damaged the land, most notably along the coast. The nation’s agricultural challenges are

compounded by drought, heightened intensity of storms and El Niño effects, and a crumbling infrastructure that includes seawalls battered by more intense waves than the nation has ever seen. All of these are consequences of a shifting global climate.

Kiribati has long depended on seawalls to keep the ocean at bay, but in recent years tides and waves crashing onto the shore have increased in severity. This presents multiple problems for the island nation. Apart from inundating the land and forcing the mainly agricultural communities on the islands to relocate, the seawater contaminates local freshwater supplies.

“People are being asked to move from places that have been home for them. It’s a human tragedy," says Tong.

While building stronger seawalls may seem like an appealing solution, their construction and implementation is suspect. Seawalls may succeed in reflecting the water away from populated areas, but they also push their erosive force upon other areas on the island, according to coastal engineer Cliff Juillerat, who is working as a contractor in conjunction with Kiribati’s government.

Juillerat says that other, more sustainable methods of abating the erosion have been considered, such as planting mangrove trees around flooded areas, which would facilitate the growth of new land.

President Tong is aware of the issues surrounding the seawalls, but mobilizing his people around alternative solutions has proved difficult. This is compounded by the fact that many of the citizens are focused on immediate mitigation efforts, causing them to lose sight of the long-term threat of climate change. “They don't have the resources to deal with things that will not directly affect them in their lifetimes,” says Tong.

If trends continue, tides will rise and become more intense, easily leveling any existing seawalls. As many of Kiribati’s citizens flee to Tarawa, the country’s main island, to escape

the ocean, another problem surfaces. Tarawa now suffers from massive overcrowding; it holds over 90% of Kiribati’s population. Eventually, if oceans rise as much as expected, Tarawa will be inundated, leaving Kiribati’s citizens with no choice but to abandon their home country while it becomes just another section of the ocean floor.

At this point, Tong isn’t worried about the economic or agricultural security of his country. He feels it is too late for that. “It's not an issue of economic growth,” he says, “it's an issue of human survival.”

The loss of an entire populated land mass from the Earth’s surface is an unprecedented environmental and human rights issue. Never before has a country had to deal with the physical loss of their homeland. Those affected are now forced to ask where they will go once they have lost their country.

Some have already tried to tackle this issue, but few have achieved lasting success. In 2013, Ioane Teitiota, a Kiribati native, sought asylum for himself and his family in nearby New Zealand, claiming refugee status due to the feared loss of his homeland. However, Teitiota’s case was rejected. While sympathetic to his plight, an immigration judge ruled that Teitioa’s claim was “fundamentally misconceived” despite the man’s claims that, “[t]here's no future for [my family] when we go back to Kiribati, especially for my children. There's nothing for us there."

The special circumstances surrounding Kiribati are causing some to question what it means to be a refugee. New Zealand’s immigration court touted the traditional refugee definition, claiming that “a refugee is fleeing his own government or a non-state actor from whom the government is unwilling or unable to protect him.” This definition does not account for

those fleeing the impact of climate change, and will need closer examination before Kiribati, or other ocean nations, become uninhabitable.

Tong has appealed to the global community (most notably New Zealand, which Tong believes will have to shelter many of Kiribati's refugees) in a recent appearance at the UN, asking for help and hoping to spread awareness of the imminent impacts of climate change, but he has yet to find a way to help save his people from losing their homes.

The global community is aware of what has been going on in Kiribati. Seeing such tangible evidence of climate change has moved many to take action to slow its effects. The most recent Global Climate Conference in Paris helped bring the issue to the forefront of many world leaders’ minds, furthering the hope that nations similar to Kiribati won’t encounter the same.

President Tong has also explored some unorthodox measures, beyond simply mitigation, to try and keep his country afloat. Tong has reached out to the Dutch engineers responsible for the artificial islands built off the coast of Dubai. He is hoping that the technology, used for recreation in the Middle Eastern city, will have a more practical use in creating land that is immune from the rising ocean threatening Kiribati.

“What might have been viewed as something unachievable and impossible may now become the solution not only for Kiribati but all other low-lying atoll islands," Tong says.

Other sources have come forward with solutions using artificial islands. Shimizu Corp of Japan (another nation at risk from rising sea levels) has drawn up preliminary plans for large

lily pad-like surfaces that could rest on the ocean and harbor life, but construction is just an idea.

Strategies such as these may be feasible, but building artificial islands, especially those meant to house over 100,000 people, is enormously expensive. (Dubai’s famous Palm Jumeirah cost an estimated $12 billion.) For Kiribati, one of the poorest nations on the planet, these solutions are economically out of reach.

Tong is hesitantly optimistic, however, and seems determined not to let anything get in the way of saving his home. "If we are really serious about ensuring a secure and safe future for our people, giving up has never been an option."