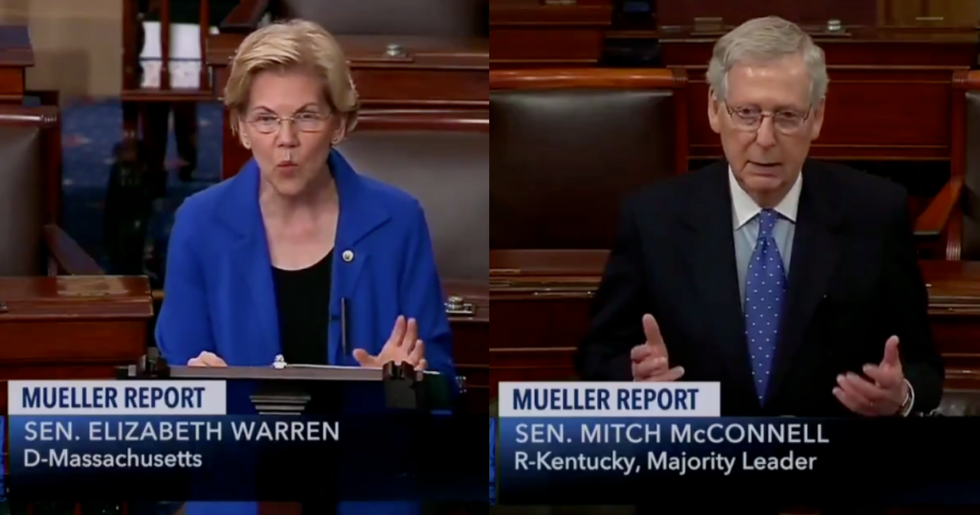 "You and I both took an oath, @SenateMajLdr McConnell," Warren tweeted. "To defend the Constitution of the United States – not to protect @realDonaldTrump. Congress must consider the evidence provided in the Mueller Report and hold the President accountable."

Watch her entire speech below:

You and I both took an oath, @SenateMajLdr McConnell. To defend the Constitution of the United States – not to prot… https://t.co/PCIqrRurkT
— Elizabeth Warren (@Elizabeth Warren) 1557243353.0

Warren said that "if any other human being had done what's documented in the Mueller report, they would be arrested and thrown in jail," referring to Mueller's findings on multiple instances of obstruction of justice by President Donald Trump.

"The only mechanism to hold the president accountable and to ensure no one is above the law is for Congress to initiate impeachment proceedings," she said, using her floor time to enter the report into the official congressional record.

"Our Constitution is built on the separation of powers, precisely to prevent a dictator from taking control... If any other human had done what's documented in Mueller report, they'd be arrested. [McConnell] doesn't want to consider the mountain of evidence. That's wrong."

.@SenWarren: "Our Constitution is built on separation of powers, precisely to prevent a dictator from taking contro… https://t.co/9f90ggOQWC
— Aaron Rupar (@Aaron Rupar) 1557244655.0

"That's over 600 former prosecutors saying that if we were talking about anyone other than POTUS, they'd be prosecuted for obstruction...the only mechanism to hold POTUS accountable & to ensure he's not above the law is for Congress to initiate impeachment proceedings."

"We are a government that works by separation of powers. We are not a government that circles the wagon around a leader...the Mueller report clearly constitutes adequate information to begin impeachment proceedings in the House...no matter how many times Republicans wish that away," Warren said.

She concluded with a call to impeach the president.

On Tuesday morning, McConnell tried to spin the Mueller report as a referendum on Democrats and Barack Obama. McConnell, citing the report's conclusions that Russia interfered with the election, said that Trump's predecessor did not do enough to prevent the attack.

Completely shameless -- @senatemajldr McConnell, who did more than anyone to prevent Obama from going public with c… https://t.co/tc0htRv1A7
— Aaron Rupar (@Aaron Rupar) 1557238521.0

"Maybe stronger leadership would have left the Kremlin less emboldened. Maybe tampering with our democracy wouldn't have seemed so very tempting," McConnell said.

The hypocrisy is absolutely astounding.

Recall that McConnell blocked Obama from warning the country about the Russian operation to disrupt the American political system.

McConnell accused Democrats of having an "outrage industrial complex" and that "for 2 years, the Democratic Party held out hope the legal system would undo their loss in 2016. They refused to make peace with the people's choice, but the American people elected this president."

"I have just listened to the Majority Leader engage in an astounding bit of whitewashing... It's sort of like Richard Nixon saying let's move on at the height of the investigation of his wrongdoing," Schumer said. "Of course [McConnell] wants to move on. He wants to cover up."

McConnell's sanctimonious backpedaling is not lost on anyone.

McConnell "sure acted differently a few years back," Schumer said."What I remember is that from the beginning the Republican leader has not taken the threat of Russia's election interference as seriously as he should. When Obama sought to warn state officials... [he] delayed."

SCHUMER notes that McConnell "sure acted differently a few years back. What I remember is that from the beginning t… https://t.co/0QaTZUZs7e
— Aaron Rupar (@Aaron Rupar) 1557239880.0

Schumer made it abundantly clear what McConnell is doing.

"What we have here is a concerted effort to circle the wagons, to protect POTUS from accountability, to whitewash his reprehensible conduct by simply declaring it irrelevant. In that effort, [Republicans] are falling down drastically on their constitutional duty."

SCHUMER: "What we have here is a concerted effort to circle the wagons, to protect POTUS from accountability, to wh… https://t.co/8XzVBksON8
— Aaron Rupar (@Aaron Rupar) 1557240066.0

Very on brand for McConnell, who has arguably done more to harm American democracy than any other politician.

Warren - a 2020 presidential hopeful - is firing up social media.

We are in uncharted territory. Buckle up.