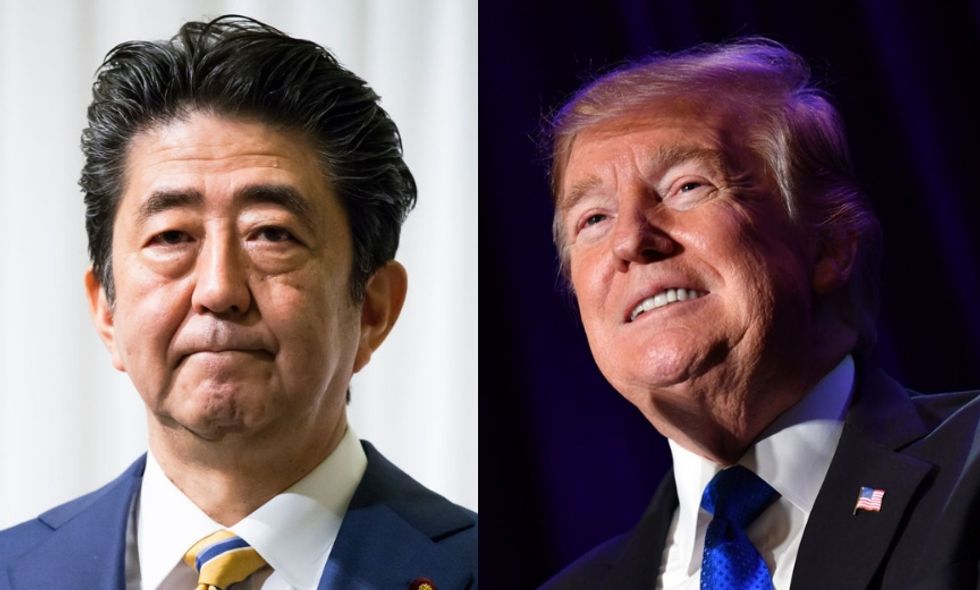 During a freewheeling press conference in the Rose Garden to declare a national state of emergency in an effort to build a wall at the southern border, President Donald Trump revived his obsession with winning the Nobel Peace Prize.

He insisted that he'd been nominated by Japanese Prime Minister Shinzo Abe.

"Prime Minister Abe of Japan gave me the most beautiful copy of a letter that he sent to the people who give out a thing called the Nobel Prize. He said 'I have nominated you, respectfully, on behalf of Japan. I am asking them to give you the Nobel Peace Prize.' You know why? Because he had rocket ships and he had missiles flying over Japan. They feel safe. I did that."

Trump also bemoaned that Obama won the Nobel Peace Prize in 2009. In the Rose Garden, Trump claimed that Obama didn't know why he'd received it.

Prime Minister Abe was later asked about his nomination of Trump and gave a slightly awkward answer. The Prime Minister insisted that the nominations had to be kept secret for 50 years, so he refused to tell anyone, but clarified:

"The Nobel Committee has doesn't reveal the identity of those recommending or those recommended for the award for 50 years. And so based on this, I would like to refrain from making comments on this."

Many speculated on whether or not Abe actually nominated Trump.

The process for nominating someone for a Nobel Prize may surprise some.

Any upstanding citizen belonging to a national government, employed as professor at a university, or a limited number of other positions can submit a letter to the nomination committee in Norway.

Abe would have simply had to write a letter endorsing Trump's character and actions, similar to the one Trump described during the speech.

Many saw the White House's reported request as another indication of Trump's obsession with besting former President Barack Obama.

@NBCNews Just sad, trump will go to any ends to best President Obama. I’m surprised he has not been caught trying to buy one.
— Martha Reichold (@Martha Reichold) 1550494292.0

Looks like we'll have to wait til after 50 years to get official confirmation from Abe.