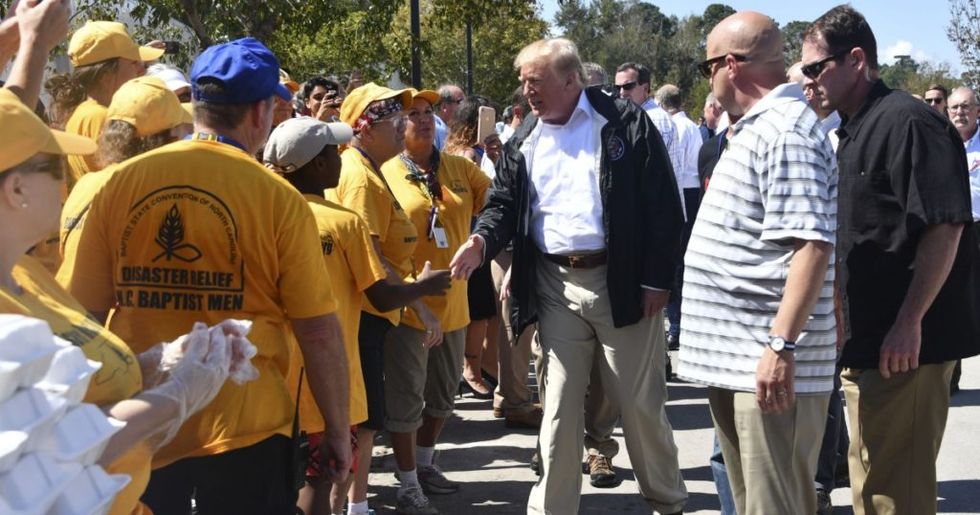 During his visit to North Carolina to tour the damage caused by Hurricane Florence, President Donald Trump told one survivor that the man might get a new boat because of the storm.

Trump was in New Bern, NC on Wednesday when he asked a homeowner if he owned a boat that had gotten washed up onto his porch.

"Is this your boat?" Trump asked the man, who said no. A grinning Trump turned to the man and said: "At least you got a nice boat out of the deal."

The homeowner then told Trump that his insurance company is refusing to cover the damage to his home.

Trump told reporters: "We're going to find out the name of the insurance company." Why, and for what, is unclear.

"I think it's incredible what we're seeing," the president said of the ruined, displaced yacht. "This boat just came here."

He continued: "They don't know whose boat that is... what's the law? Maybe it becomes theirs."

Twitter slammed the president for his feeble try at a joke.

"His attempts at humor are horrible and inappropriate."

@MarkLandler Seriously! He has no empathy or understanding what these people are going through!
— TMS (@TMS) 1537382486.0

Trump didn't seem to grasp the weight of the man's situation.

Trump's lack of empathy is one of his best-known traits.

@MarkLandler He is absolutely incapable of responding with empathy in any situation that requires it. He makes me ill.
— KathyF (@KathyF) 1537401848.0

In the South, "bless his heart" is as bad as it gets, right? Nope.

@MarkLandler This comment has gone right past our general Southern response of "Bless his heart" to our very specif… https://t.co/UZs1CQCguc
— Kevyn Creech (@Kevyn Creech) 1537386484.0

Some residents of North Carolina joked that they were still waiting for Trump to throw paper towels at them as he did in Puerto Rico after Hurricane Maria tore through the island a year ago.

Here's the law, by the way.

The president came under fire earlier in the day for another insensitive remark.

While handing out meals to storm victims, Trump told one person to "have a nice time" after handing them a box of food. He said the same thing to Hurricane Harvey survivors after the storm devastated Houston, Texas last year.

On Wednesday morning, Trump told residents his administration was behind them "100 percent."

"We will be there 100 percent, and all of the folks from the federal government that are around the table, they're confirming it," he said during a briefing at the Marine Corps Air Station in Cherry Point, N.C. "That’s why we started early and we’ll be here late."

Florence took the lives of nearly 40 people after dumping several feet of rain and flooding coastal areas in the Carolinas and Virginia.

“One of the wettest we’ve ever seen from the standpoint of water” is how Trump describes Hurricane Florence in a pr… https://t.co/aITgOXSxD4
— Jennifer Epstein (@Jennifer Epstein) 1537314522.0

Trump described the storm as "one of the wettest we've ever seen from the standpoint of water."