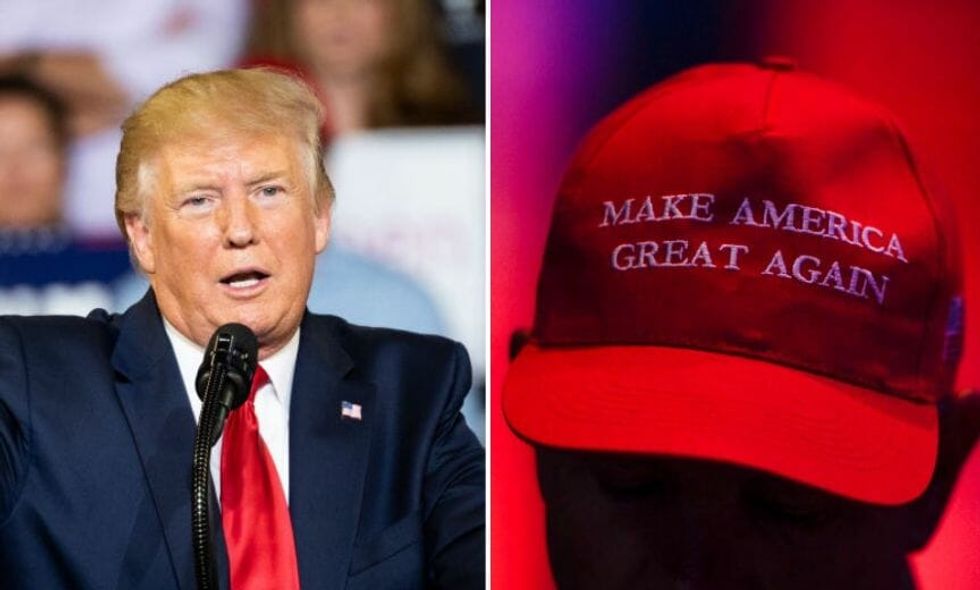 No acronym has seen such a sudden, stratospheric rise to fame in the last four years than "MAGA," after President Donald Trump's 2016 campaign slogan "Make America Great Again."

Over the course of Trump's raucous campaign and erratic presidency, the term evolved to become a battle cry of sorts for the right; a way to own the libs in a perfectly manageable two syllables.

But it turns out, the word MAGA is about as original as First Lady Melania Trump's Republican National Convention speech.

As linguist Kọ́lá Túbọ̀sún points out in a 2017 essay, "Maga" is actually a Nigerian slang word, originating from the Yorùbá word múgùn:

"It means 'fool,' but when broken down to component morphemes [mú-gùn], it means something like '(someone) to ride about, like an ass.'

It is one of those words hard to successfully translate without using too many words. But if someone successfully convinces me to part with $50 with the promise of getting $100 in an hour, and then disappears, I’ve become his múgùn. He rolled me over."

The term evolved into its Nigerian Pidgin equivalent Mugu, then took its final form as "Maga" in the early 2000s, during the advent of internet scams.

It means nothing in itself. It couldn’t be broken down to component parts because it didn’t belong to any language. It was just a small, smart, and apt expression that described a specific victim: an online fool who has parted with his/her money and/or emotions for the promise of millions or the promise of a relationship with a prince across the ocean."

He uses the 2008 music video for "Maga Don Pay" (or, the Maga has paid up) by musician Kelly Hansome as an example of the term's implications.

In other words, a "Maga" is the American equivalent of a sucker.

When author Kurt Eichenwald found this out last year, he was eager to share it with his Twitter followers.

Some Nigerians and others let him know that they were in on the joke the whole time.

@kurteichenwald Well as a Nigerian, when I first heard that slogan “MAGA” from Trump’s base during d election we Ni… https://t.co/QNmIpYnJ0r
— Omo-George (@Omo-George) 1519949616.0

@kurteichenwald Somebody snitched already. 😂🤣 now you know how we feel when we see someone wearing the MAGA branded hat. Awkward.
— NEOTERIC (@NEOTERIC) 1520017174.0

@kurteichenwald It's actually the term advanced fee con guys in Nigeria use to refer to anyone being conned ....Tru… https://t.co/Ib0FhEnGBu
— OLAGOKE AWOYELE (@OLAGOKE AWOYELE) 1519990032.0

@kurteichenwald @CathrynLSmith1 Now that is funny. Think the 🍊 knows that and he is openly admitting his followers are fools?
— Ponder (@Ponder) 1565808713.0

As it turns out, some of Trump's biggest buzzwords have a wealth of linguistic implications.

Maaaaybe we should've seen this coming?