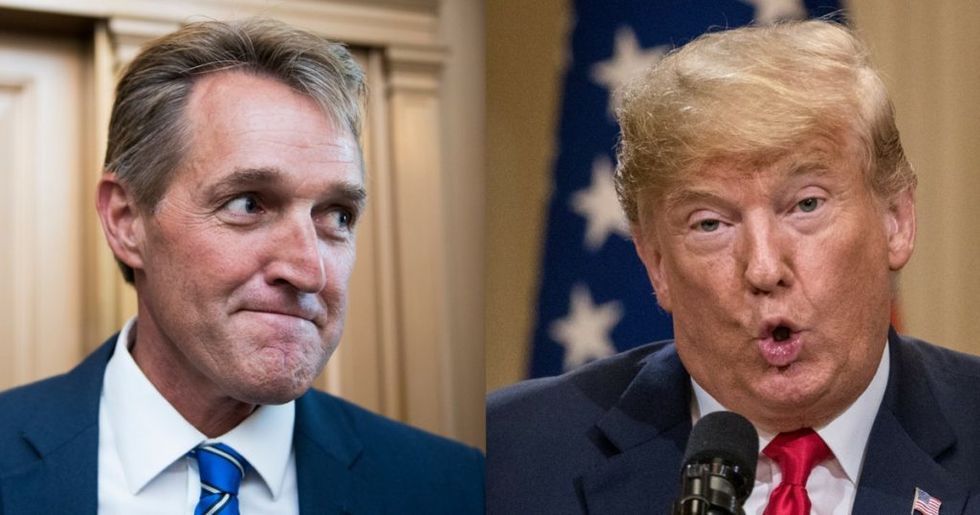 Senator Jeff Flake (R-AZ) got into a Twitter spat with President Donald Trump Tuesday night after the president claimed Flake had his Senate endorsement rejected.

Trump tweeted that Flake, who is not seeking reelection and has been an outspoken critic of the president, had endorsed Martha McSally, the Arizona Republican Congresswoman running to replace him, and that McSally had rejected his endorsement.

"Martha McSally, running in the Arizona Primary for U.S. Senate," Trump said, "was endorsed by rejected Senator Jeff Flake....and turned it down - a first!"

According to Flake, however, this is completely untrue. Flake responded with a tweet of his own.

"Sorry, @realDonaldTrump. I made no endorsement in this race," Flake tweeted. "I think the last endorsement I made was in the Alabama race."

The comments were posted along with a picture of a check Flake wrote to "Doug Jones for U.S. Senate" -- a Democrat -- with the memo field filled out: "country over party."

Sorry, @realDonaldTrump. I made no endorsement in this race. I think the last endorsement I made was in the Alabama… https://t.co/DjYpSNouSs
— Jeff Flake (@Jeff Flake) 1535522347.0

The shade of it all.

Twitter users urged Flake to secure his legacy by voting against confirming Brett Kavanaugh, whom Trump tapped in June to replace Justice Anthony Kennedy on the Supreme Court.

Flake had originally posted the image of the check ahead of last year's special Senate election in Alabama:

Jones, a Democrat, defeated Republican Roy Moore, filling the seat left vacant by Attorney General Jeff Sessions. Moore was a controversial candidate, having been accused of having inappropriate relationships with teenage girls when he was in his 30's.

Flake's reply is a swipe at Trump, who endorsed Moore's bid for the Senate. In fact, Trump threw his weight behind Moore eight times on Twitter between September and December 2017, when the special election was held. One post was deleted, however, in violation of the Presidential Records Act.

Trump wrote that Moore "sounds like a really great guy." Moore, who served as chief justice of the Alabama Supreme Court, was removed from office - twice. The first time was in 2003 for refusing to obey a court order to remove a Ten Commandments monument from the state judicial building. Moore was subsequently reelected and then suspended in 2016 after he encouraged probate judges to refuse to issue same-sex marriage licenses.

Spoke to Roy Moore of Alabama last night for the first time. Sounds like a really great guy who ran a fantastic race. He will help to #MAGA!
— Donald J. Trump (@Donald J. Trump) 1506509813.0

When Moore lost to Jones in December's special election, Trump tried to walk back his endorsement, claiming "the deck was stacked against" Moore.

The reason I originally endorsed Luther Strange (and his numbers went up mightily), is that I said Roy Moore will n… https://t.co/DcgJPmLTXy
— Donald J. Trump (@Donald J. Trump) 1513164124.0

@realDonaldTrump You endorsed one other candidate and pardoned the third, but now act as if you had something to do… https://t.co/4sRx17ngMj
— Dana DelSignore (@Dana DelSignore) 1535519214.0

Twitter mercilessly tore into Trump for not having many successes.

Trump loves to take credit for "wins" and abdicate accountability for losses.