Donald Trump Just Claimed 'Everyone' Wants Ivanka to Be UN Ambassador, and People Are Responding Exactly the Way You'd Expect 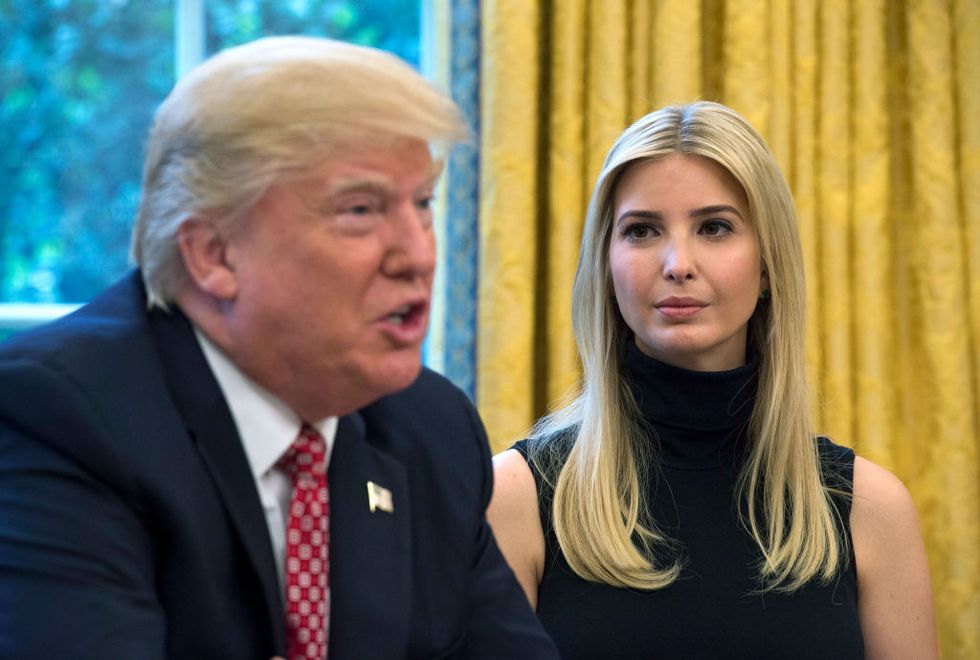 WASHINGTON, DC - APRIL 24: (AFP OUT) U.S. President Donald Trump speaks along with his daughter Ivanka during a video conference with NASA astronauts aboard the International Space Station in the Oval Office at the White House April 24, 2017 in Washington, DC. (Photo by Molly Riley-Pool/Getty Images)

In a tweet on Friday, President Donald Trump again touted his daughter and advisor Ivanka Trump's qualifications to replace United Nations Ambassador Nikki Haley, who will be leaving her post at the end of this year.

For unclear reasons, Ms. Trump's name arose for the position almost immediately after the announcement of Haley's resignation, though she insists she does not want the position and the president claims that, despite so-called qualifications, he would be decried for nepotism.

So nice, everyone wants Ivanka Trump to be the new United Nations Ambassador. She would be incredible, but I can al… https://t.co/Dab4lBqUNq
— Donald J. Trump (@Donald J. Trump) 1539352486.0

This is at least the second time Donald Trump has indirectly made the suggestion, saying after Haley's resignation:

"I've heard a lot of names. I've heard Ivanka. How good would Ivanka be? I think Ivanka would be incredible, but it doesn't mean I'd pick her. Because I'd be accused of nepotism even though I'm not sure there's anybody more competent in the world."

Trump has remained consistent in his lack of clarity as to just who is suggesting this. In today's tweet, he said that "everyone" wants Ivanka as UN Ambassador, but Twitter users were quick to point out that that wasn't the case.

@realDonaldTrump Actually, many many people do NOT want Ivanka to be the UN Ambassador because there are many other… https://t.co/BZChOzqxAa
— Liddle’ Savage (@Liddle’ Savage) 1539352618.0

Ivanka herself has shot down the notion.

It is an honor to serve in the White House alongside so many great colleagues and I know that the President will no… https://t.co/bzrBDAobCi
— Ivanka Trump (@Ivanka Trump) 1539120451.0

In addition to the wild unpopularity of the idea, others clarified that the appointment would receive cries of nepotism because it would, in fact, be nepotism.

As many pointed out, a president putting his or her daughter into a cabinet level position is absolutely nepotism.

@realDonaldTrump Yes. And it's nepotism to have her in the role she's in now too. Glad you recognize that. Nepot… https://t.co/2jzz1hIRqc
— Andrew Stroehlein (@Andrew Stroehlein) 1539353917.0

Though it wouldn't be unheard of. President John F. Kennedy appointed his brother Robert to Attorney General. The decision was controversial, but Kennedy was qualified to practice law and had conducted numerous legal investigations.

Ivanka Trump is woefully unqualified for the position. Though a successful clothing designer, television personality and entrepreneur, Ms. Trump has no diplomacy or foreign policy experience and has never held public office.

@realDonaldTrump ability to pick out shoes to go with an outfit is not in the job description...
— Ann Ducommun (@Ann Ducommun) 1539361195.0

Lack of qualifications aside, it's been observed that Ivanka Trump possesses more of her father's favor and influence than any of his children, with many observing the president's unusual and sometimes unsettling fixation with her.

If Ivanka did want the position, it would likely be hers.