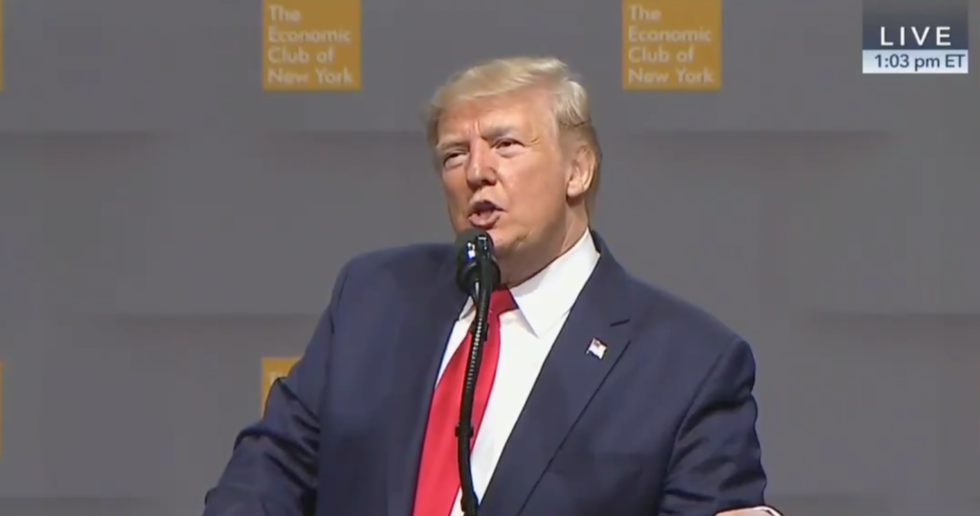 President Donald Trump returned to his Manhattan roots on Tuesday afternoon, giving a rambling speech to the Economic Club of New York.

As is typical for the President, Trump touted the booming employment rate continuing from the long-established trend set by former President Barack Obama.

What was interesting is that he didn't take all the credit, but instead, claimed his eldest daughter-turned-advisor, Ivanka, was responsible. He credited Ivanka with creating 14 million new jobs.

The problem? Fewer than six million new jobs have been created since Trump took office.

Watch the outrageous claim below.

It's unclear exactly what he thinks Ivanka did to create these jobs. She spearheaded the Pledge to America's Workers, which saw 300 companies sign a non-binding pledge to provide up to 12 million training opportunities for prospective employees in an effort to shrink the skills gap responsible for much of America's unemployment rate.

Ivanka previously claimed this effort created over six million jobs, but most of the companies that signed the pledge admitted they'd only reported actual job openings.

A falsehood from Trump is all in a day's work, but that didn't stop people from calling him out.

@atrupar The lies flow so easily and they just get bigger. Astonishing! As John Stewart so sagely observed in the… https://t.co/nELQIPaenu
— Russ Lindgren (@Russ Lindgren) 1573589801.0

Though hundreds in the crowd at the Economic Club of New York had to have known this was untrue, the audience applauded nevertheless.