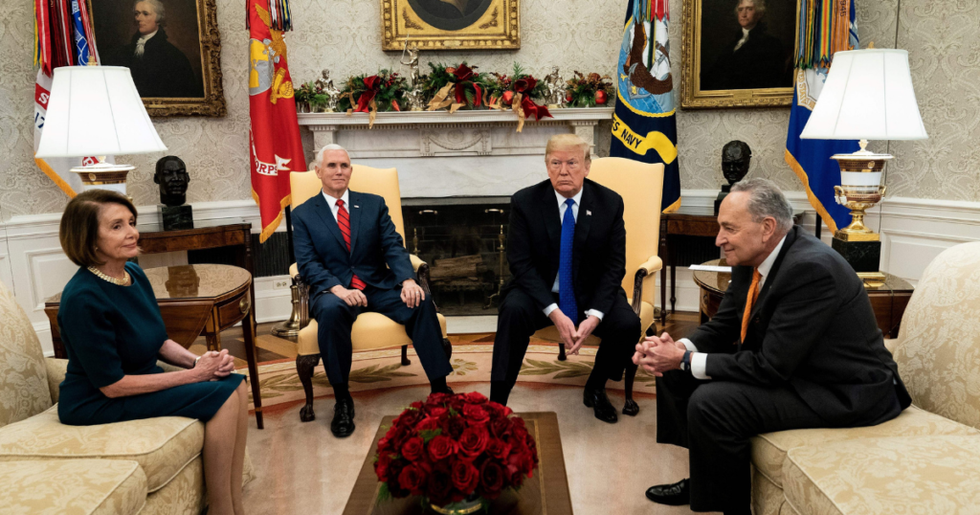 President Donald Trump was mercilessly barraged on Friday after he tried to blame Democrats for the impending government shutdown - the third on Trump's watch.

"The Democrats now own the shutdown!" the president tweeted.

The president is lying to a degree that should frighten all of us.

The federal government is slated to shut down at midnight because of Trump's belligerence over funding for a border wall. The House late Thursday night passed a $5.7 billion border security measure which is all but doomed in the Senate.

More importantly though, last week, Trump pompously said he would be "proud to shut down the government" in the name of "border security" (his wall).

"If we don't get what we want, one way or the other... I will shut down the government ... So I will take the mantle. I will be the one to shut it down. I'm not going to blame you for it."

You own the shutdown—your own words, @realDonaldTrump. The Senate UNANIMOUSLY passed a bipartisan solution to avoid… https://t.co/Ydg0NU9ADx
— Chuck Schumer (@Chuck Schumer) 1545406752.0

Twitter - including some Democrats - went ballistic on Trump for reneging on yet another pledge.

@realDonaldTrump Nope, you already claimed responsibility for it. You don’t get to blame others for not doing your job.
— William LeGate (@William LeGate) 1545411838.0

@realDonaldTrump You are not hurting Democrats only. You are hurting millions of Americans who live pay check to p… https://t.co/ygtxss1CPH
— Lisa Sowieja (@Lisa Sowieja) 1545411391.0

Does the president think the American people are oblivious, or is he losing his grip on reality?

@realDonaldTrump Call me crazy but I distinctly remember Congress agreeing on a bill with the President so they lef… https://t.co/nmWPLpl8YL
— Steve McCarthy (@Steve McCarthy) 1545411612.0

Trump and the Republicans still control the entire federal government for another two weeks, so this inter-party bickering is pointless. Trump could get a wall if his party wanted one.

@realDonaldTrump Mr. President, a Republican is in the White House and Congress is controlled by Republicans. The c… https://t.co/OJ0TDaDCPB
— ElectionFilter (@ElectionFilter) 1545412650.0

@realDonaldTrump About this shutdown: Just about every time there is a government shutdown the US's credit rating… https://t.co/I6PohYvJmq
— Ann Noell (@Ann Noell) 1545412662.0

Mr. President, this is your shutdown.

In fact, Trump has, on numerous occasions, made it abundantly clear he believes presidents own government shutdowns.

FACT – the reason why Americans have to worry about a government shutdown is because Obama refuses to pass a budget.
— Donald J. Trump (@Donald J. Trump) 1376073219.0

My sense is that people are far angrier at the President than they are at Congress re the shutdown—an interesting turn!
— Donald J. Trump (@Donald J. Trump) 1381179958.0

When the government closed in July over DACA, Trump said it was worth it.

I don’t care what the political ramifications are, our immigration laws and border security have been a complete an… https://t.co/eYFA8HcawS
— Donald J. Trump (@Donald J. Trump) 1533058427.0