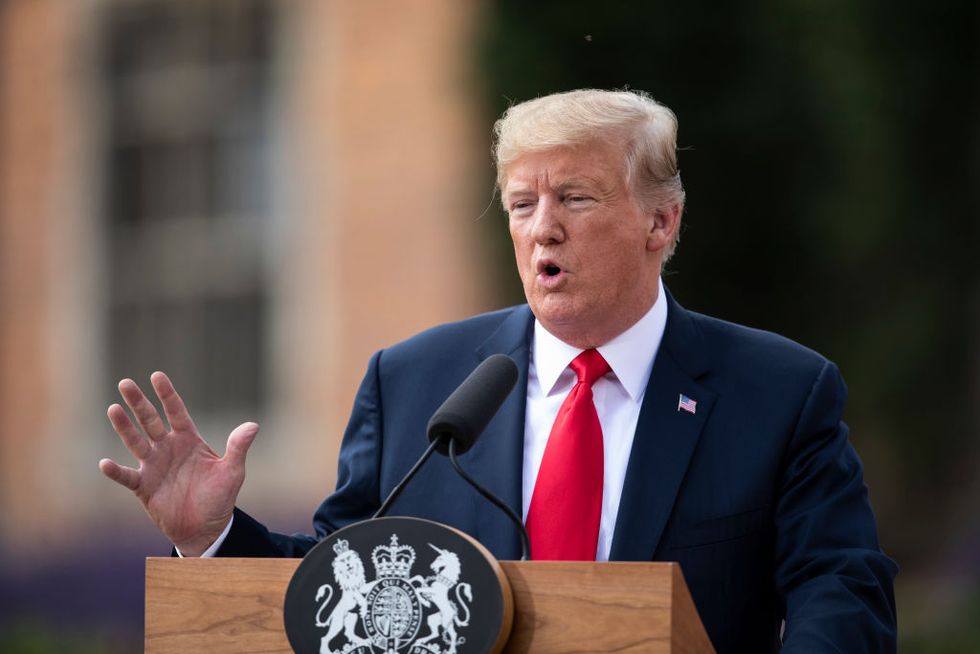 AYLESBURY, ENGLAND - JULY 13: U.S. President Donald Trump speaks during a joint press conference with Prime Minister Theresa May at Chequers on July 13, 2018 in Aylesbury, England. US President, Donald Trump, held bi-lateral talks with British Prime Minister, Theresa May at her grace-and-favour country residence, Chequers. Earlier British newspaper, The Sun, revealed criticisms of Theresa May and her Brexit policy made by President Trump in an exclusive interview. Later today The President and First Lady will join Her Majesty for tea at Windosr Castle. (Photo by Dan Kitwood/Getty Images)

Mere days before his highly contentious meeting with Russian leader Vladimir Putin in Helsinki, President Donald Trump named the European Union, which comprises some of the United States' closest allies, when asked to identify his "biggest foe globally right now."

Trump made the comments during an interview with "CBS Evening News" anchor Jeff Glor in Scotland on Saturday while at his golf club in Turnberry, Scotland.

His complete statements are as follows:

The president's comments opened him up to a firestorm of criticism from Democrats, Republicans, and political commentators alike.

The President of the United States listed the European Union as a “foe” before getting to Russia and China. This is… https://t.co/S02W1VniaQ
— Renato Mariotti (@Renato Mariotti) 1531665748.0

Perhaps the most biting criticism came from Donald Tusk, the President of the European Council.

The president's comments are particularly jarring given what we've learned from an indictment that the Justice Department released Friday afternoon. The indictment reveals that, in 2016, Russian operatives attempted to hack Hillary Clinton's private email server––the same day that Trump infamously requested that the Russians do just that.

In announcing that the Justice Department charged 12 Russian intelligence officers with offenses related to the hacking of the Democratic National Committee’s emails, Deputy Attorney General Rod Rosenstein to, as NPR notes, “unite against foreign influence in the American democratic process.”

“In my remarks, I have not identified the victims,” Rosenstein said. “When we confront foreign interference in American elections, it is important for us to avoid thinking politically as Republicans or Democrats and instead to think patriotically as Americans. Our response must not depend on who was victimized.”

The White House, for its part, has emphasized that no members of the Trump campaign were named in the indictment, and many of the president's supporters have suggested that his meeting with Putin should proceed. Trump has indicated that he will discuss election meddling with Putin, though he's remained vague in virtually all other respects.

In recent days, President Trump had ramped up his attacks against Special Counsel Robert Mueller and members of his investigation into Russian interference, lashing out at Lisa Page and Peter Strzok, two figures at the center of a Republican-led Congressional probe into whether Mueller’s investigation has operated with clear bias––and even animus––toward the president.

How can the Rigged Witch Hunt proceed when it was started, influenced and worked on, for an extended period of time… https://t.co/1bWxGnfoCK
— Donald J. Trump (@Donald J. Trump) 1531349236.0

He did not respond to news of the indictment when it was released but found time to blame the Obama administration for the Justice Department's findings.

The stories you heard about the 12 Russians yesterday took place during the Obama Administration, not the Trump Adm… https://t.co/PAZnAMIP0T
— Donald J. Trump (@Donald J. Trump) 1531562903.0

Last week, Senator Jeff Flake (R-AZ) criticized Trump after he made international headlines for comments which undermined the integrity of the North Atlantic Treaty Organization (NATO) and heightened political tensions with the United States’ allies.

“The mindset that comprehends a trade deficit as a grievous offense or an unfair act of aggression is the same mindset that can upend vital security relationships that have been similarly misperceived,” the veteran senator said.

And then he took a swipe at President Trump directly:

Sometimes, if I didn’t know better I might say that we purposefully trying to destabilize the western alliance and to turn the world upside-down. I might come to this conclusion because, by a process of elimination, no other answer would make any sense.

Mr. President, if this is some kind of stratagem, what good could possibly be achieved by heedlessly making friends into enemies? And who, exactly would benefit?

Earlier, Flake called out the president for his friendly regard for Vladimir Putin––a relationship which has continued to baffle national security experts and the world at large given that Trump is under federal investigation on allegations that he colluded with the Russian government to win the 2016 presidential election.

“Singing his praises for no good reason sends a terrifying message to our allies. … Flattering such a man … is simply bizarre. That the admiration comes from an American president, well, that is unconscionable,” Flake said. He observed the strangeness of the two men meeting face to face without staff present, particularly when the “world seems to be hanging in the balance.”