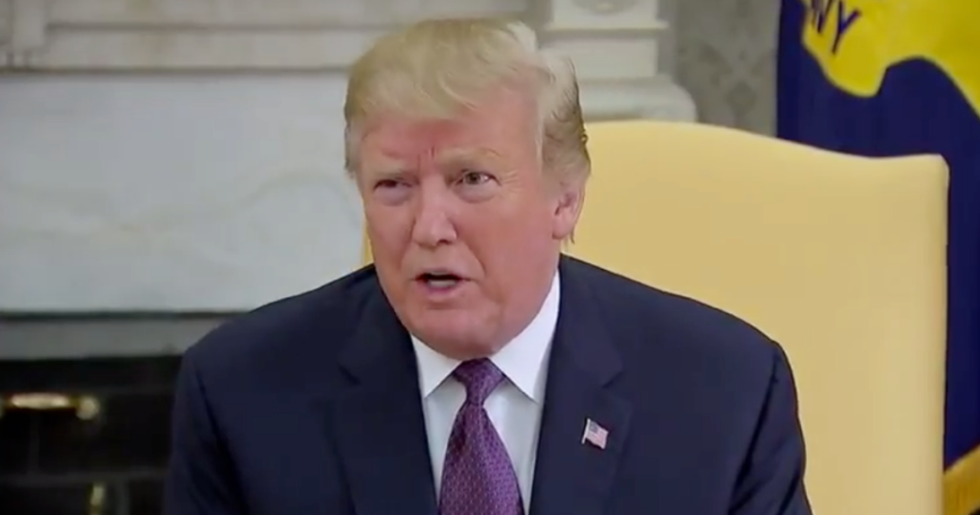 President Donald Trump said Monday that American farmers will be the biggest beneficiaries of his escalating trade war with China, but his plan to keep farms afloat makes no sense.

During an Oval Office meeting with Hungarian Prime Minister Viktor Orbán, Trump continued to mischaracterize who is actually paying the substantial tariffs he has imposed on Chinese imports.

On Friday, Trump increased tariffs on $200 billion worth of Chinese imports from 10 to 25 percent and is considering slapping another 25 percent onto the remaining $325 billion.

"Out of the billions of dollars we'll be taking in, a small portion of that will be going to our farmers, because China will be retaliating probably to a certain extent against our farmers," Trump said.

Indeed, China did retaliate with 5 to 25 percent tariffs on $60 billion worth of American goods as of June 1.

Trump's response? Another bailout on top of the $12 billion subsidy he called for last fall.

“We’re going to take the highest year, the biggest purchase that China has ever made with our farmers, which is about $15 billion, and do something reciprocal to our farmers so our farmers can do well. They'll be planting, they'll be able to sell for less and they will make the same kind of money until such time that it's all straightened out."

So much for the "socialism" boogeyman.

Trump's plan to use taxpayer money to support farmers - from tariffs that taxpayers are paying - resembles a Ponzi scheme.

@Reuters There is nothing like taking from Peter to pay Paul. Taking money out of poor peoples pockets to give to farmers is wrong.
— Kent Morlan (@Kent Morlan) 1557834991.0

Trump promised to run the country just like his businesses. Welp...

Trump is banking on China caving and returning to the table. But China is turning elsewhere for crops that they used to buy from American farmers, such as soybeans.

“Many countries have the willingness and they totally have the capacity to take over the market share the U.S. is enjoying in China. If other countries become reliable suppliers for China, it will be very difficult for the U.S. to regain the market,” Chinese Vice Agricultural Minister Han Jun told official Xinhua news agency in an interview last August.

“Levying additional tariffs will cause a great decrease in exports of U.S. agricultural products to China,” Han said. “But the impact on China is very limited, due to the diversified import sources.”

And their rhetoric is escalating.

Chinese state media has begun calling for a "people's war" against Trump for the harm it claims the trade war is causing the Chinese people.

"The most important thing is that in the China-US trade war, the US side fights for greed and arrogance ... and morale will break at any point. The Chinese side is fighting back to protect its legitimate interests," the Global Times tabloid wrote in an editorial published by Xinhua News Agency.

"The trade war in the US is the creation of one person and one administration, but it affects that country's entire population. In China, the entire country and all its people are being threatened. For us, this is a real 'people's war.'"

The Chinese view Trump's trade war as an act of aggression.

Trump's tariffs "are very much like spraying bullets. They will cause a lot of self-inflicted harm and are hard to sustain in the long term," the nationalist publication wrote. "China, on the other hand, is going to aim with precision, trying to avoid hurting itself."

This should end well.