Donald Trump Is Getting Dragged for Fixating on Hillary Clinton at His Orlando Rally, and Clinton Just Responded With a Sick Burn 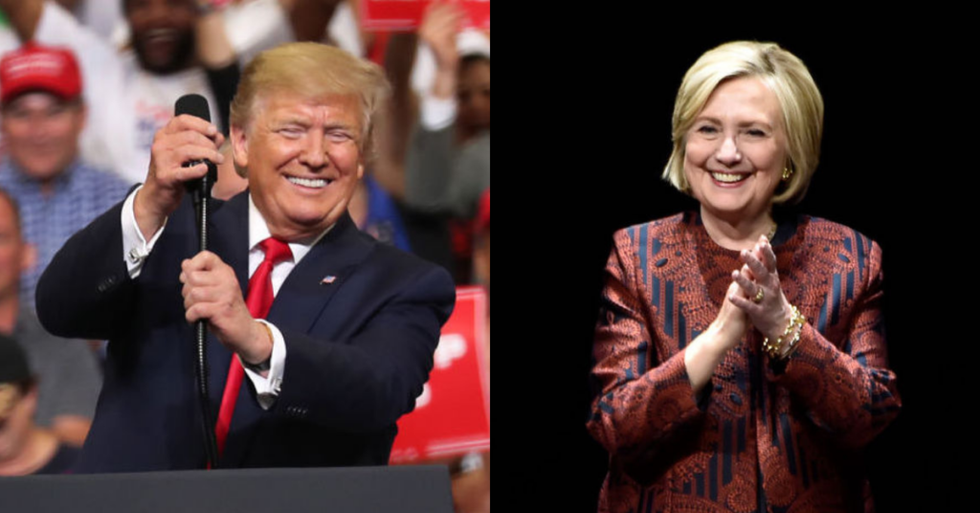 President Donald Trump held another MAGA rally. This time it also served as the official kick off of his 2020 presidential campaign.

He chose a location that handed him two pieces of bad news yesterday before his MAGA rally: the conservative, Republican supporting newspaper the Orlando Sentinel endorsed "Not Donald Trump" for 2020 and Quinnipiac polls revealed his support in Florida fell behind all the Democratic frontrunners.

However the MAGA rally formula went on as normal, replete with the standard chants of most of the same rhetoric that constituted his 2016 campaign. The evening included mocking of his political rivals by his family and the President himself.

The familiar chant of "lock her up" was started and encouraged at the June 18 MAGA rally, over 2 years since former Secretary of State Clinton left public service and the political trail to become a private United States citizen.

Trump commemorates the start of his 2020 reelection campaign by attacking Hillary Clinton and basking in "lock her… https://t.co/WnpyU48xWE
— Aaron Rupar (@Aaron Rupar) 1560904090.0

Trump is still out here attacking Hillary Clinton for saying "deplorables." Going after Hillary has been a centerpi… https://t.co/GoIjkV16pV
— Aaron Rupar (@Aaron Rupar) 1560905461.0

.@HillaryClinton you must be EXHAUSTED! Cause you’ve been running through @realDonaldTrump small mind for a LONG time. 😩
— Andrew Gillum (@Andrew Gillum) 1560908446.0

But Clinton responded to let Gillum—and everyone else—know she's unbothered.

People loved the response and offered a few of their own.

@AndrewGillum @HillaryClinton @realDonaldTrump Well not too exhausted - it is a “small” mind after all
— fitzcharming (@fitzcharming) 1560908784.0

In addition to targeting Clinton, Trump also made several false claims about other political rivals and boasted of the things he would accomplish if reelected. The 2020 presidential election is now 502 days away.

The book #StillWithHer : Hillary Rodham Clinton and the Moments That Sparked a Movement is available here.