Canada and Mexico Just Clapped Back at Donald Trump's Steel and Aluminum Tariffs, and Republicans Are Siding With Them 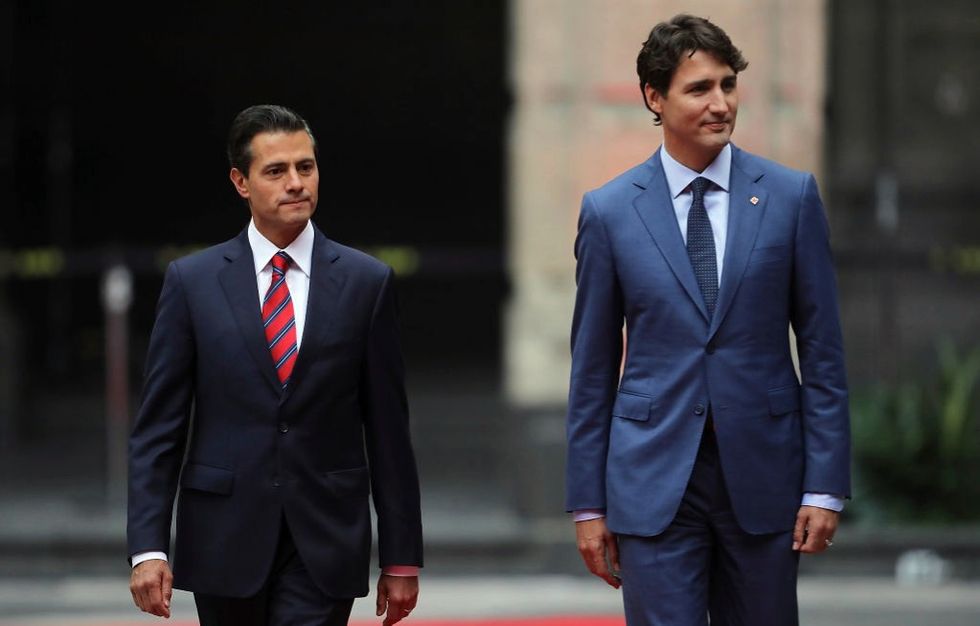 The North American Free Trade Agreement (NAFTA) was signed by Canada, Mexico, and the United States, creating a trilateral trade bloc in North America. It allowed the three nations to enjoy special trade relations within and negotiate as a team without.

The agreement came into force on January 1, 1994 after being approved by congress then signed by President Bill Clinton. But the actual negotiations happened under the Republican administration of President George H. W. Bush, who signed the agreement December 17, 1992 before passing it to congress.

The primary goal of NAFTA eliminated barriers to trade and investment between the United states, Canada and Mexico.

Economists consider NAFTA beneficial for the United States. The U.S. Chamber of Commerce credits NAFTA with increasing U.S. trade in goods and services with Canada and Mexico from $337 billion in 1993 to $1.2 trillion by 2011. A reassessment in 2015 found the agreement still benefited the United States.

I received calls from the President of Mexico and the Prime Minister of Canada asking to renegotiate NAFTA rather than terminate. I agreed..
— Donald J. Trump (@Donald J. Trump) 1493291532.0

...subject to the fact that if we do not reach a fair deal for all, we will then terminate NAFTA. Relationships are good-deal very possible!
— Donald J. Trump (@Donald J. Trump) 1493292080.0

Since taking office, the president announced or enacted numerous tariffs, including on steel and aluminum. Tariffs of 25 percent on steel imports and 10 percent on aluminum took affect on Canada and Mexico as of midnight Friday in Washington, DC.

Our allies retaliated in kind creating the beginnings of a trade war. Canada and Mexico, currently engaged in talks with the Trump administration on NAFTA, responded with new tariffs of their own.

"The American administration has made a decision today that we deplore, and obviously is going to lead to retaliatory measures, as it must," Prime Minister Justin Trudeau stated.

President Donald Trump’s tariffs on Washington’s closest allies failed to draw praise for Republicans in congress and the country’s main business lobbying group. Drops in financial markets occurred as well with the announcement of each new tit-for-tat tariff.

U.S. Chamber of Commerce President Tom Donohue warned Trump's current trade policies could threaten the economy and cause the loss of more than 2 million jobs. Most of those job losses hurt states that voted for Trump.

Congressional Republicans expressed outrage after the White House abruptly announced it would begin imposing the steel and aluminum tariffs Friday on US allies Canada and Mexico despite NAFTA still being in full affect.

Renegotiation does not equate to termination.

"I disagree with this decision," Republican House Speaker Paul Ryan of Wisconsin said in a statement.

There are better ways to help American workers and consumers. I intend to keep working with the president on those better options."

"I don't like trade wars," an anonymous Republican senator said. "There are no winners in trade wars. And this scares me."

Public responses fall along the same lines, with support only coming from Trump's base and those actually profiting from his tariffs. But one Twitter user, writer Matthew Chapman, gave his own detailed analysis of why Trump disregards all facts and data on trade agreements in his decision making.

The one thing that you need to understand about Trump is that he is, at his core, a con man with no empathy. There… https://t.co/9MMMdEjdLb
— Matthew Chapman (@Matthew Chapman) 1527850255.0

This is why Trump will never, ever, be able to negotiate with the rest of the world. He doesn't believe in mutual b… https://t.co/sJU2GUsV9P
— Matthew Chapman (@Matthew Chapman) 1527851258.0