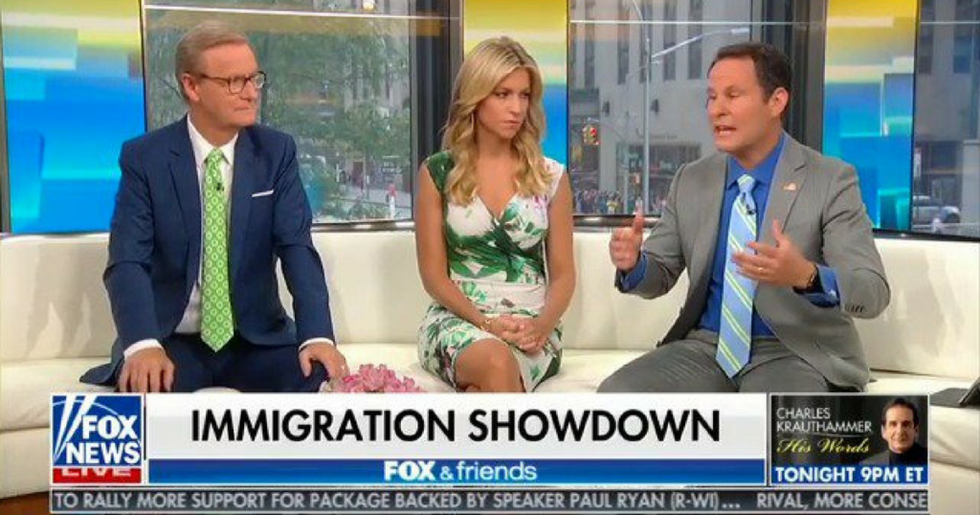 "Show them compassion, but it's not like he is doing this to the people of Idaho or Texas. These are people from another country and now people are saying that they're more important than people in our country who are paying taxes and who have needs as well."

Kilmeade also said that merely criticizing President Donald Trump's "zero tolerance" policy isn't enough, and that "we can't just let everybody in who wants to be here."

Somebody has to deal with this issue. It doesn't matter who the president is. If you don't like his policy, he's also open to your policy rather than just criticizing his. He's trying to send a message to the other countries. This is not the way you do it because this is a country that has rules and laws. The port of entry will be one thing. We can bolster those laws, but we just can't let everybody in that wants to be here.

"There is no understanding this level of evil," one Twitter user responded.

@mmfa I keep hearing from fellow Democrats how we are supposed to try to understand republicans and their point of… https://t.co/t9I7aMS6qd
— BDAinVA (@BDAinVA) 1529670401.0

Fox News has had quite the week. On Monday, Attorney General Jeff Sessions attempted to explain to Laura Ingraham why keeping migrant children locked in cages shouldn't be compared to what the Nazis did to the Jews.

Sessions explained to Ingraham that claims of harsh conditions and snatching kids from their parents were “exaggerations,” because “in Nazi Germany, they were keeping the Jews from leaving the country.”

Sessions here seemed to be implying that the two situations are totally different because his ultimate goal with these migrants is to send them out of the United States, back to where they came from. And that’s his defense.

Of course, the first order of business in Nazi Germany was to deport the millions of European Jews out of their countries of origin and into camps. They were never returned to their homes, and most never saw their families again.

Also on Monday, ICE acting director Thomas Homan appeared on Tucker Carlson's show and bemoaned ICE agents being compared to Nazis because they "are simply enforcing laws enacted by Congress."

Known as the Nuremberg defense, captured Nazi officers claimed they were "just following orders" in their attempts to avoid prosecution for their roles in the Third Reich's atrocities during the Holocaust.

Homan dismisses concern about condition of kids in detention centers as "a political sideshow." "You have to put t… https://t.co/vD8FPkMy6t
— Aaron Rupar (@Aaron Rupar) 1529367065.0

"I think it's an insult to the brave men and women on border control and ICE, to call law enforcement officers Nazis," Homan told Carlson. "They're simply enforcing laws enacted by Congress."

Conservatives, and defenders of treating immigrants as criminals, either don't care or would rather not acknowledge the truth about why people are trying to enter our country.

Most of them are claiming asylum, which is not a crime, and are fleeing violence and persecution from rogue actors within their countries of origin.

They come seeking a better life, often with no idea of what awaits them at our southern border. To them, America is the land of hope and opportunity.

Hope is all they have.