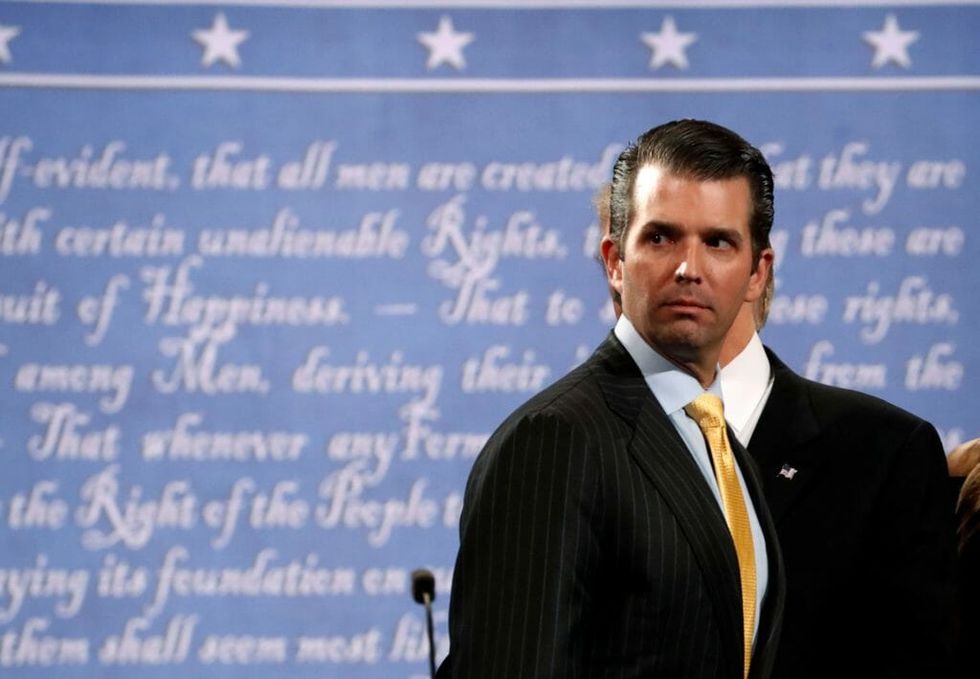 On Monday, Donald Trump, Jr. famously revealed an e-mail exchange in which he enthusiastically accepted the invitation to hold a meeting with a Russian lawyer promising incriminating evidence on Hillary Clinton as part of the Russian government's effort to aid Mr. Trump's 2016 campaign.

While it had been confirmed that Donald Jr., Jared Kushner and then Trump campaign chairman Paul Manafort all attended the meeting with Russian lawyer Natalia Veselnitskaya, a new attendee, former Soviet counter-intelligence officer Rinat Akhmetshin, has confirmed his presence at the meeting as well.

According to The AP, "Akhmetshin has been reported to have ties to Russian intelligence agencies," a claim he denies.

Akhmetshin, who emigrated to the U.S. and currently serves as a lobbyist, has already been on the radar of U.S. officials. In April, Senate Intelligence Committee Chair Senator Grassley and ranking member Senator Feinstein sent a letter to DHS Secretary John Kelly requesting information on Akhmetshin.

In the letter they describe Akhmetshin as "a Russian immigrant to the United States who has been accused of acting as an unregistered agent for Russian interests and apparently has ties to Russian intelligence."

...it has been reported that he worked for the GRU and allegedly specializes in “active measures campaigns,” i.e., subversive political influence operations often involving disinformation and propaganda.

Akhmetshin's explanation of the meeting goes well beyond the innocuous meeting Trump described.

During the meeting, Akhmetshin said Veselnitskaya brought with her a plastic folder with printed-out documents that detailed what she believed was the flow of illicit funds to the Democratic National Committee. Veselnitskaya presented the contents of the documents to the Trump associates and suggested that making the information public could help the Trump campaign, he said.

Rep. Adam Schiff, ranking member of the House Intelligence Committee, released a statement on Friday slamming the new revelation, saying it "paint[s] a portrait of consistent dissembling and deceit"on the part of the Trump team.

“Today’s report that a former Russian counter-intelligence officer was also present during the meeting with Donald Trump, Jr., Jared Kushner and Paul Manafort, if accurate, adds another deeply disturbing fact about this secret meeting. Donald Trump, Jr.’s denial of any such meetings, his misleading initial representation that it dealt only with adoptions — a statement evidently approved by the White House — and his later admission that the whole purpose of taking the meeting was to receive the support of the Russian government in the form of damaging information about Hillary Clinton paint a portrait of consistent dissembling and deceit when it comes to the campaign’s meetings with Russian officials and intermediaries.

“Finally, whether the additional party or parties present during the meeting with these top Trump campaign personnel at the time Donald Trump had seized the nomination were connected directly with Russian intelligence or not, it is clear the Kremlin got the message that Donald Trump welcomed the help of the Russian government in providing dirt on Hillary Clinton. This was true not only because Donald Jr. said he would love such help, and, even if we are to believe his account of the meeting, expressed great dismay that he didn’t receive the damaging information he was promised, but also because candidate Trump himself made very clear his desire that the Russian government hack Hillary Clinton’s emails, saying they would be richly rewarded. Indeed that has proved all too true.”