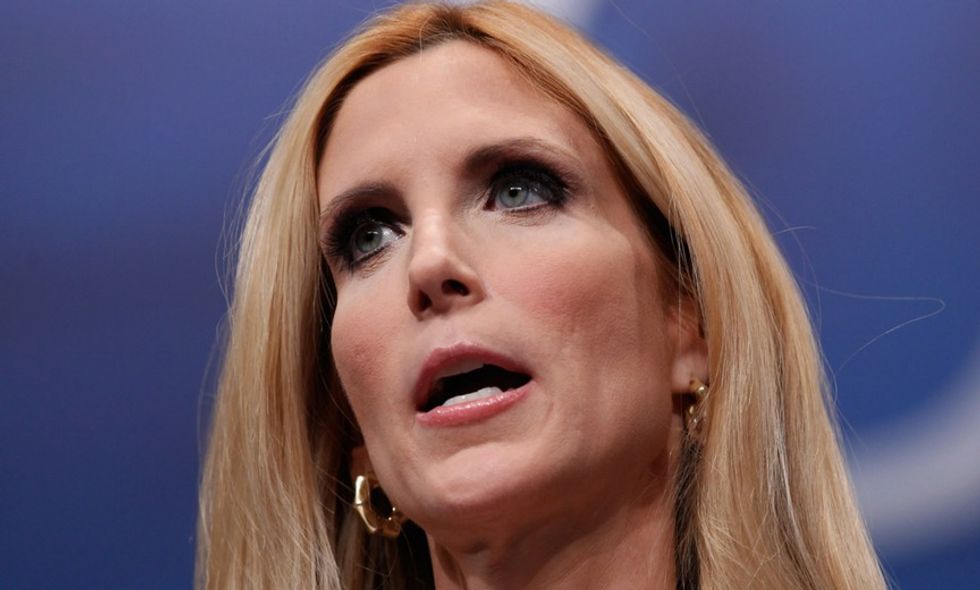 Ann Coulter made a name for herself in conservative circles during the late 1990s through the mid 2000s with a syndicated weekly newspaper column, her own radio show and frequent appearances on television news channels. But in the last decade, Coulter found herself pushed out of the spotlight by younger, more inflammatory conservative women like Laura Ingraham and Tomi Lahren.

With over 2 million Twitter followers from her heyday, most of Coulter's tweets rarely garner more than a few hundred comments and a few thousand likes. Now, Coulter gains most of her social media notice by criticizing President Donald Trump or by making deliberately controversial statements on Twitter, which can boost her likes into the tens of thousands.

On Sunday night, Coulter tweeted simply the word "bullshit" 16 times in all caps, without any context or thread.

Leaving people to wonder just what the context could have been.

Some wondered if she suffered a malfunction.

When really the context wasn't much of a mystery at all considering the news that had broken from The New Yorker about an hour before:

Senate Democrats are investigating a new allegation of sexual misconduct against Brett Kavanaugh, dating back to hi… https://t.co/qvAQz3FAD3
— The New Yorker (@The New Yorker) 1537746684.0

Not to mention Coulter's follow-up tweets, which went on the attack against Kavanaugh's accusers for choosing now to come forward.

But that didn't stop people from continuing to mock Coulter for her Twitter outburst.

@AnnCoulter Did your universal translator break down? This is what we see when we read one of your tweets.
— PencilDickTrump (@PencilDickTrump) 1537802685.0

While others decided to fill in the blank about just exactly what Coulter referenced with her invectives.

While subsequent stand alone posts indicate what her "bullshit" Twitter post was likely about, people continued to create their own answers. They were less than kind to the conservative pundit.

Quite a few referred to Coulter's career as a writer. She wrote or contributed to 15 books.

@AnnCoulter Are you transcribing your new book? Funny, looks just like you last one and the one before and the one… https://t.co/UWkWVsuN8b
— Gregg Fiege (@Gregg Fiege) 1537796623.0

@AnnCoulter Bless your little heart! You've been reading your own tweets and come to the same conclusion the majority of Americans have.
— Cyndy Stachowiak (@Cyndy Stachowiak) 1537800746.0

And one person asked about the status of Coulter's 2 million followers since the comments lacked a pro-Coulter faction.

What Coulter intended to attack—based on the subject of the individual posts following this one—was The New Yorker's report on a fellow Yale classmate of Brett Kavanaugh, Deborah Ramirez, coming forward with another allegation regarding Kavanaugh and sexual misconduct while at Yale.