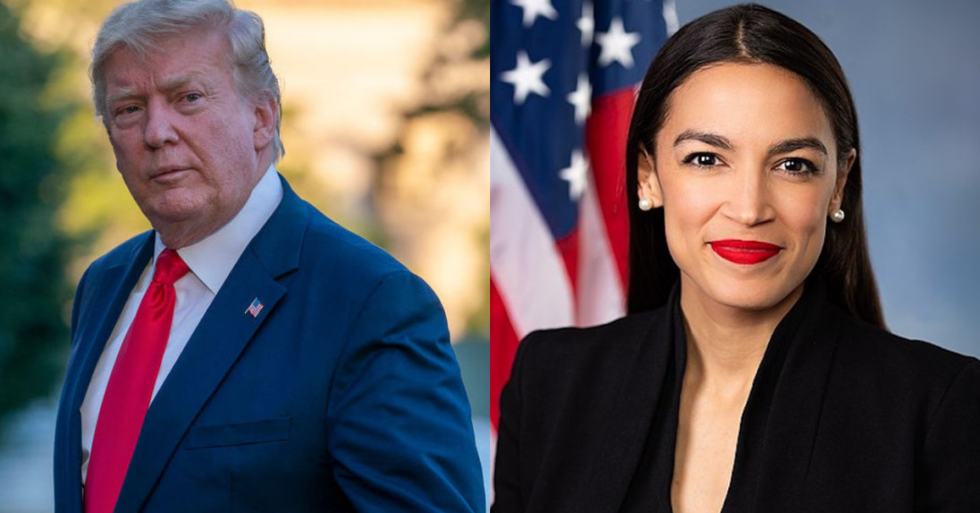 After a disturbed person at Congresswoman Alexandria Ocasio-Cortez's town hall on Thursday called for eating babies to solve the climate crisis, Ocasio-Cortez went on Twitter to call for compassion, urging her critics on the Right to stop ridiculing the woman, whom Ocasio-Cortez believed may have had a mental condition. She was later revealed to be a pro-Trump plant.

President Donald Trump's son, Donald Trump Jr., sadly still acted with the level of maturity that Americans have come to expect from him.

And in a display of approval we're sure Jr. was eager for, the President retweeted his son, writing:

Ocasio-Cortez is the latest Democrat to fall target to Trump's deflections from the impeachment inquiry launched against him last week. News has only gotten worse for Trump after revelations that during a private phone call with Ukrainian President Volodymyr Zelensky in which Trump urged Zelensky to investigate his political rival, former Vice President Joe Biden. Support for impeachment has only grown since.

It wasn't long before Ocasio-Cortez, who has long been a leading voice in calling for Trump's impeachment, was quick to remind him that he used the office of the Presidency for personal gain.

Ocasio-Cortez is constantly tweeting out clapbacks, and her latest one had people applauding.

Others began reminding Trump of a few things as well.

@realDonaldTrump Your calling someone else a wack job is what therapists call projection.
— Miranda Yaver (@Miranda Yaver) 1570152519.0

As usual, the detractors haven't deterred him. The President has tweeted 12 times in the 12 hours since he sent that tweet.