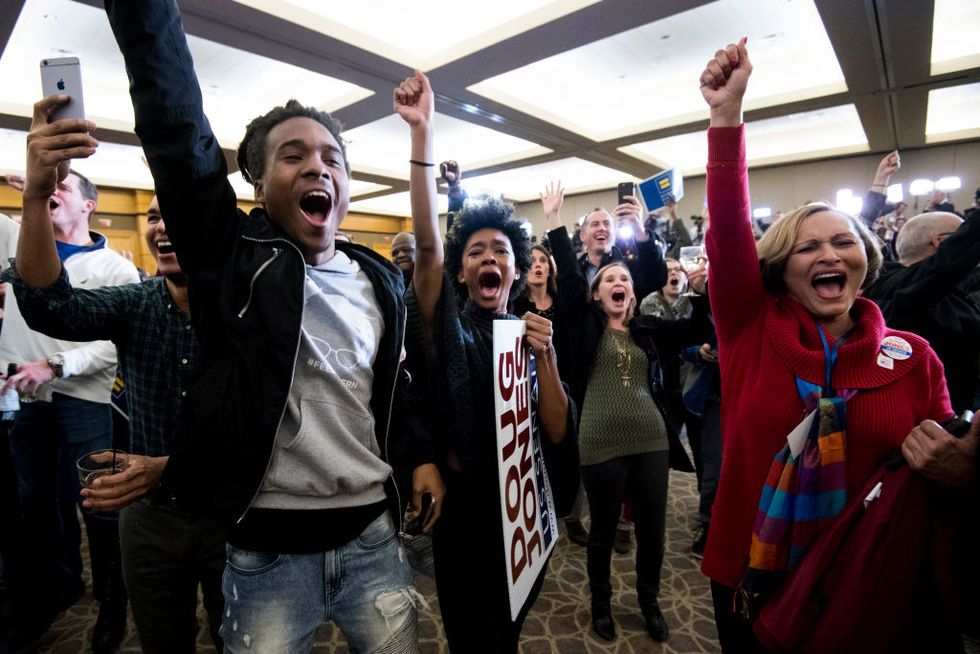 Democrat Doug Jones pulled a surprise win for the Alabama U.S. Senate seat against Trump-endorsed, neo-Nazi-endorsed Republican candidate Roy Moore, who's been accused of sexual misconduct and said America was last "great" when slavery was legal. The same Roy Moore who stated in 2011 that getting rid of constitutional amendments after the 10th Amendment would ‘eliminate many problems’ in the U.S. government, and who was fired as chief justice, twice, for refusing to uphold the Constitution when he denied a federal order to permit same-sex marriage licenses in the state of Alabama.

And yet, Moore almost won the Senate seat left vacant by Jeff Sessions when the latter was appointed to Attorney General by President Donald Trump.

All indicators prior to Tuesday showed Moore in the lead to win the election, despite all his past actions. Many people feared that Republicans care more about not allowing a Democrat to win than they care about the allegations, and that religious conservatives are conveniently forgiving when it serves them and their president.

So how did Jones manage a victory? A preliminary exit poll conducted by Edison Research for the National Election Poll, The Washington Post, and other media showed that a strong turnout among black voters played a key role in electing Jones.

In particular, it was black women who turned the tide, with 98 percent of them voting for Jones. Their group would be the most offended by Moore's racist remarks regarding slavery, and by the allegations of his sexual misconduct with young women.

The voter turn out and the results are made even more significant by the fact that Alabama is overwhelming white, nearly 70 percent, and only 26.8 percent being black. The Washington Post’s exit polls indicate that black voters would make up 28 percent of the voters, greater than their 26 percent share of the population. In fact, more black voters turned out for the special election than when they did to vote for President Barack Obama in 2008.

Additionally, the state of Alabama has one of the strictest voter ID laws in any U.S. state. In 2011, Alabama passed a photo ID law which requires voters to have at least one of several specific kinds of photo ID in order to be able to cast the ballot.

Even though accurate voting data is not yet available, people on Twitter are giving black women the credit for Roy Moore's defeat.

But it did not always seem that this would happen.

The Atlantic reports that there was a very different narrative among Alabama's black voters leading into Tuesday's special election. They were not mobilizing nor were they described as "energized." Interest was low, with the majority of African-Americans polled by the New York Times not even knowing an election was going on. If Jones had lost, surely the blame would have shifted to African-Americans - the very group that ended up saving the election.

Just got off the phone with Birmingham City Councilor Sheila Tyson: "The lines have been long, the parking lots jam… https://t.co/SarZZv8zHP
— Ella Nilsen (@Ella Nilsen) 1513114407.0

Meanwhile, Moore’s support sagged in majority-white counties, where many voters preferred to stay home than vote for Jones. Case in point, The Atlantic reports that only 56 percent of Trump-entrenched Cullman County's 2016 presidential election levels arrived at the polls to vote this time around.