People are Napping to Burn Calories

Napercise is a new class offered at a UK fitness center structured for overtired parents to sleep in ideal conditions for 45 minutes, in between 15 minutes of light stretching at mid-day. Science does indicate mental and physical health problems for adults who get insufficient sleep, including difficulty with weight loss. 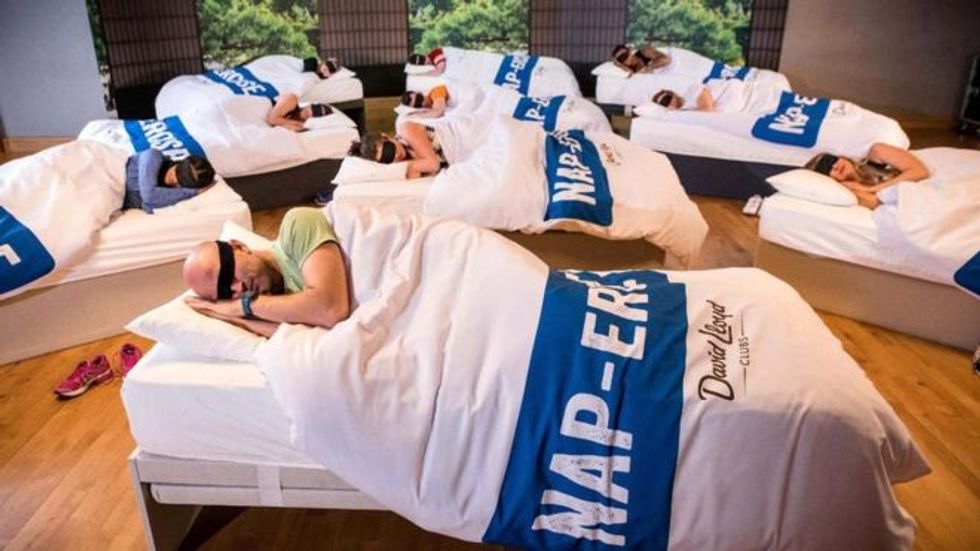 A fitness club in the United Kingdom (UK) has started what it hopes will be the latest luxury trend: napercise. While people may balk at first glance, scientific research indicates that mid-day naps may, in fact, be beneficial to our minds and bodies.

Napercise, created by David Lloyd health clubs, is a class primarily designed for overtired parents—25 percent of whom admit to spending less than five hours sleeping each night. Seven to nine hours is the daily sleep recommendation for adults age 26-64, according to the National Sleep Foundation. The Napercise class contains 45 minutes of uninterrupted sleep, surrounded by a total of 15 minutes of gentle stretching.

The class provides an eyemask, pillow, blanket and bed for each person—in addition to a cool temperature and peaceful sounds to help facilitate the ideal mid-day nap.

“The frantic nature of modern life means that few of us seem to get enough sleep," the Napercise class description explains. "And if you’re a parent, a good night’s rest becomes even more of a luxury." The David Lloyd website says Napercise is designed to assist "exhausted mums and dads boost their mental and physical well-being," and "to reinvigorate the mind [and] the body.”

Science emphasizes the health benefits of sufficient sleep. For instance, Kathryn Pinkham – an expert on sleep, who worked with the David Lloyd club to develop the Napercise program – indicated that sleep is significantly more important than most people understand.

"We tend to focus on the short-term effects such as being tired or lacking concentration, but it is also essential for our long-term physical and mental wellbeing too," she said.

In support of Napercise’s concept, a study by Pennsylvania's Allegheny College involved participants who took a 45-minute mid-day nap. Data shows the nappers better-rested and more able to handle stress than those who did not nap. A second study conducted at the University of California, Berkeley, indicates people who take mid-day naps increase their learning capacity.

In fact, lack of sleep can cause various physical and mental health problems, according to sleep experts Dr. Yelena Pyatkevich of Boston Medical Center and Dr. Dianne Augelli from New York Presbyterian and Weill Cornell Medicine. They told Self magazine that without enough sleep, people can experience a weakened immune system, unclear thoughts, and mood swings.

David Lloyd’s website claims Napercise “even burn[s] the odd calorie.” While there’s no proffered evidence that simply sleeping for 45 minutes in the club’s cool temperature will burn calories, perhaps any significant calorie burning comes from napping as viewed within a larger context.

Pyatkevich and Augelli explained that lack of sleep also increased people’s desire for fried foods and slowed their metabolism. This explains the common claim that lost sleep can affect people’s ability to lose weight. Thus, while the nap alone may not burn a significant number of calories, it helps add to the daily total hours of sleep, which perhaps can mitigate those factors that prohibit weight loss.

While Napercise is currently in its trial stage, apparently people are open to the concept. According to David Lloyd Clubs’ website, the first class was completely booked. Eventually, the UK fitness club hopes to expand Napercise to all its branches.