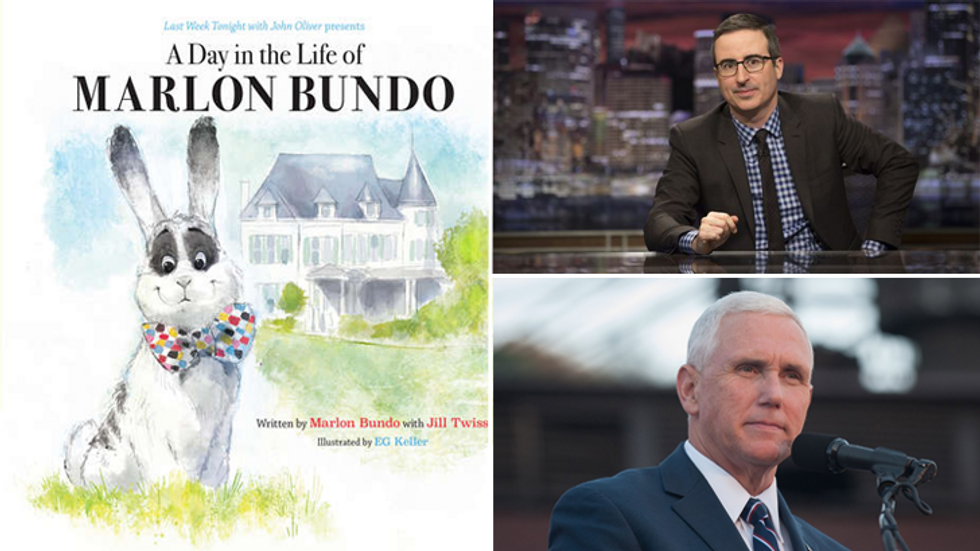 During Sunday’s episode of Last Week Tonight with John Oliver, the HBO host spent the evening's primary segment discussing the Vice President of the United States, Mike Pence. Before launching into discussions of Pence’s stance on conversion therapy and his link to the anti-gay American Christian organization Focus on the Family, which is known for promoting the use of conversion therapy, Oliver promised viewers that he would say “one nice thing” about the Vice President.

That brought him to mention the Pence family’s pet rabbit, Marlon Bundo, or BOTUS (Bunny of the United States). According to Oliver, on March 19, Mike Pence’s daughters, Charlotte and Karen, were releasing a book titled Marlon Bundo’sDay in the Life of the Vice President. The children’s book follows Bundo as he keeps up with “Grampa” (Mike Pence) during his day-to-day as the Vice President Though it may sound like a delightful story, Oliver points out that during a tour to promote Bundo’s tale, the Pence family will be stopping at a Focus on the Family event dedicated to the book.

Not a man to let an opportunity pass by him, Oliver then announced that his Emmy-winning production was releasing their own version of Marlon Bundo’s book titled A Day in the Life of Marlon Bundo. Like the Pence family’s book, Last Week Tonight's version, which is authored by Jill Twist and illustrated by EG Keller, will follow the BOTUS as he’s forced to live under the oppression of Stink Bug, or an insect charicature of Pence. The authentic children’s book takes a different turn, however, as Bundo falls in love with another boy bunny.

The snippet shown at the conclusion of Last Week Tonight was a delightful and adorable introduction to Bundo’s tale. It providing just enough of a glimpse inside to demonstrate that the book will tackle real-world issues like LGBTQ rights in a child-friendly format. A Day in the Life of Marlon Bundo released a day before Marlon Bundo’s Day in the Life of the Vice President and is available on Amazon and Chronicle Books. To make purchasing the book even more accessible, Oliver added that it can be found at www.betterbundobook.com and www.focusonthefurmily.com. An audiobook is also available via Amazon featuring the voice talents of Jim Parsons, Jesse Tyler Ferguson, Ellie Kemper, John Lithgow, Jeff Garlin, Jack McBrayer, and RuPaul.

Any donation made to The Trevor Project, a non-profit for LGBTQ youth, or AIDS United will result in a free e-book version of the light-hearted illustrated anecdote. All proceeds from book sales will also go to the Trevor Project.