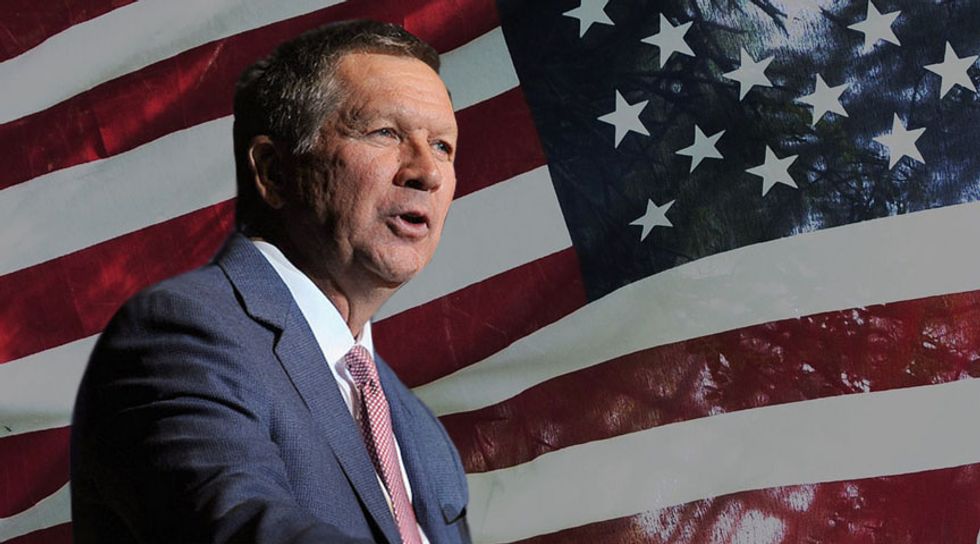 Ohio Governor John Kasich has made a name for himself as the GOP’s most socially liberal candidate. For instance, while Kasich has made it known that he supports what the right refers to as “traditional marriage,” he has been quoted as saying that he supports civil unions for same sex couples. And in a recent interview with Fox News, Kasich argued that--with regard to Kim Davis--the GOP has “bigger fish to fry in terms of the whole issue of faith.” Essentially, he believes that the Davis controversy and similar Christian conservative conniptions do a great deal more harm to religious causes than good -- and he’s probably right. According to Kasich,

“[w]e have a lot of young people that have walked away from, or are confused or uncertain about personal faith. . . . when young people, or people who are looking at what is religion all about, what is faith all about -- when they see dust-ups like this, my concern is they would go the other way and say, 'Look, I don't want anything to do with that.”

Although Kasich is clearly concerned about the effect these fits of fervor continue to have on the Republican party, his appeal to grace on Fox seemed more focused on saving souls than collecting votes--and that may be just where Kasich’s political appeal lies. Amid the cacophony of political punditry and posturing, Kasich’s voice stands out as genuine. That may explain why Kasich gained ground in early polls -- as of August, Kasich closely trailed Scott Walker as the fourth candidate in a New Hampshire poll, behind current front runners Jeb Bush and Donald Trump. Since then, however, the world has shifted markedly. Walker is out, and Kasich has slipped.

It is unclear at this point whether Kasich’s brand of authenticity can keep his momentum going. After all, the bickering and personal attacks that Kasich refuses to engage in may be bad for the GOP’s image, but they make for great TV. While Donald Trump, Jeb Bush and Carly Fiorina dominated the stage at CNN’s debate last week, Kasich barely had an opportunity to speak; in a three hour debate, Kasich was only asked to answer four direct questions.

John Kasich is a true career politician with a long and well-established record. In 1978, at age 26, he became the youngest person ever elected to Ohio’s state senate. He went on to serve nine terms in the United States House of Representatives, spending eighteen years as a member of the House Armed Services Committee and six years on the House Budget Committee.

After a failed Presidential bid in 1999, Kasich took a break from politics to host his own television program on Fox News. He also accepted a position at Lehman Brothers -- something that has haunted his political career since; Kasich famously earned an extravagant bonus well in excess of his six figure salary just before the investment bank folded in 2008.

Despite his questionable ties to Wall Street’s pre-recession excesses, Kasich went on to become Governor of Ohio in 2010, beating then-incumbent Ted Strickland in an extremely close race. Four years later, Kasich was re-elected by a significantly wider margin, winning a majority of the vote in all but two of Ohio’s 88 counties.

While there should be no doubt that the former investment banker is a staunch fiscal conservative, Kasich’s views on everything from same-sex marriage to health care policy tend to be a lot more centrist than any of his GOP rivals. While Huckabee and Cruz use religion to justify their extreme right wing views, Kasich points to his faith as the reason for his centrism. For example, an article in The Columbus Dispatch quoted Kasich discussing his support for Medicaid expansion in 2013. Kasich quipped:

And Kasich ensured that he will have an answer, having played a key role in Ohio’s acceptance of Medicaid expansion under the Affordable Care Act. Kasich also supports a path to citizenship for people who entered the US illegally. One social issue on which he

toes the party line, however, is abortion; the Ohio Governor has helped to create a maelstrom of new barriers to women’s reproductive freedom in his home state.

But Kasich’s mostly moderate social views are not his only challenges for a 2016 run. It turns out that the same authenticity that sets him apart has tripped him up in the past. According to Ali Hakim of the Harvard Political Review, “Kasich has garnered a reputation of abrasiveness. . . . His arrogance has turned off donors, and he has even lashed out at constituents.” While his history of bucking the party establishment might be Kasich’s chance to shine, if he wants to win the favor of donors, he’s going to have to learn to “play nice.”

And if Kasich wants to regain momentum with voters, he’s also got to learn to choose his words more wisely. During a recent trip to a Naval shipyard in Kittery, Maine, for instance, Kasich expressed support for base closures. Speaking with reporters, Kasich argued that workers’ anxiety about the Base Realignment and Closure process (BRAC) “makes everyone more efficient” and “keeps everyone on their toes.” In addition to losing him any favor he held among those who work on base, Kasich’s comments could also get him into trouble with Republican voters who support a strong military.

Senator Lindsey Graham seized a brief opportunity to attack Kasich for his comments about base closures during CNN’s undercard debate; none of Kasich’s opponents, however, took him to task during CNN’s mainstage event. That may be because he’s not viewed as much of a threat. Though Kasich has done well in New Hampshire, his national polling numbers fail to impress; as of the morning after CNN’s debate, Kasich was polling somewhere in the middle of the sixteen Republican candidates.

Polls aside, candidates have been clinging to a message that resonated with Republican voters once upon a time. But America’s social landscape is changing, and rapidly. If the Grand Ol’ Party wants to remain relevant, it will have to let go of some of its outdated social sticking points. To do that, the party will need a strong voice to help reshape the platform.

And John Kasich would be happy to take that job.