Ancient Greeks May Have Helped To Build China's Terracotta Army 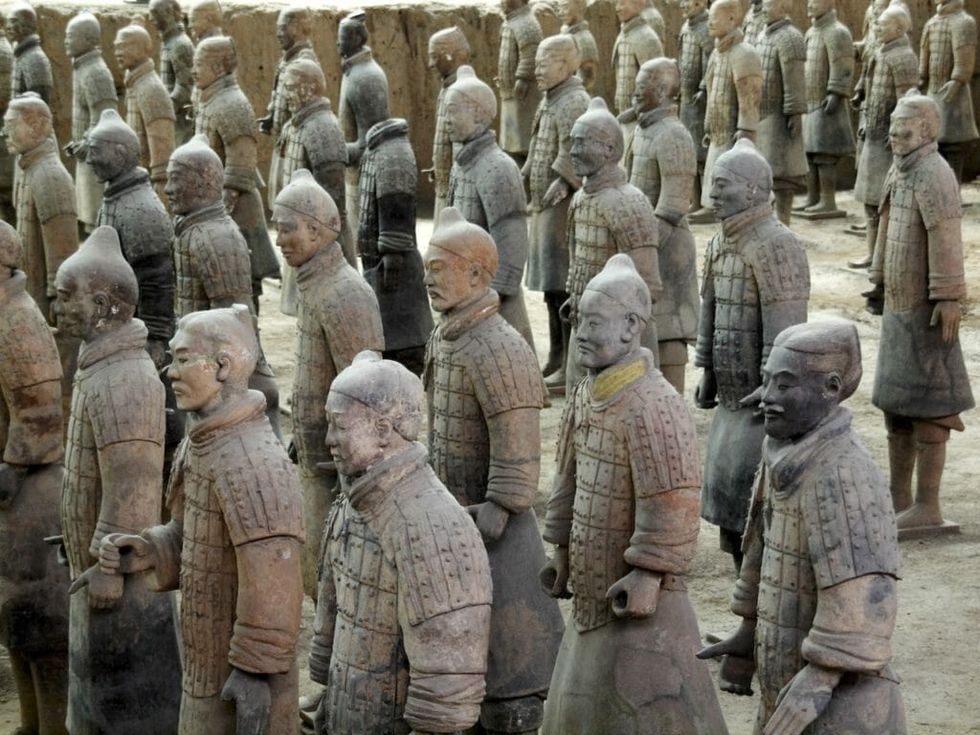 China's famous terracotta warriors may owe their inspiration to the Ancient Greeks. Scientists at the site have unearthed DNA and other evidence suggesting that China and the West were in contact as early as the third century B.C. This newly theorized date of contact predates explorer Marco Polo’s visit to China by over 1,500 years.

Forty years ago, a farmer discovered a startling sight when digging among his cabbages: a human head. The head turned out to belong to one of 8,000 terracotta soldiers found near the old Chinese capital of Xianyang.

Further excavations unearthed a grand funerary complex in honor of the First Emperor, Qin Shi Huang Di, who died in 210 B.C. (though not before uniting warring kingdoms, ending feudalism, and building the Great Wall of China). The terracotta soldiers and accompanying cavalry, acrobats and sculptures were apparently meant to protect the emperor for eternity.

The statues were unlike anything unearthed before in China. Prior statuary had only been about 8 inches tall and fairly stylized. In contrast, the terracotta army is life-sized and intricately detailed.

Scientists and historians working on the tomb have recently uncovered trace amounts of European DNA from skeletons buried near the site. This suggested that Westerners may have lived in the area, even before the rule of the First Emperor. This finding contradicts century-old beliefs about when the first contacts between East and West occurred.

terracotta and bronze statues found in the tomb to those found in Greece during the same period.

“We now think the Terracotta Army, the Acrobats and the bronze sculptures found on site have been inspired by ancient Greek sculptures and art,” said Senior Archaeologist Li Xiuzhen of the Emperor Qui Shi Huang’s Mausoleum Site Museum.

“I imagine that a Greek sculptor may have been at the site to train the locals,” concurred Lukas Nickel, chair of Asian art history at Vienna University in Austria.

More mysteries remain to be uncovered as excavation of the tomb continues. The tomb itself, which spans nearly 38 square miles, is much larger than previously thought. And during the course of the investigation, many new burial sites were uncovered.

Some of the burial sites appear to hold the remains of those who labored on the mausoleum—a fair number given the thirty years it took to complete.

Other mass burials are more mysterious. Archaeologists uncovered several tombs that were empty except for female body parts strewn across the doorways. Experts believe that these bones might be the remains of the emperor’s concubines, who may have been executed when the new emperor usurped the title from the First Emperor’s heir.  Why the remains were dismembered remains unclear.

The scientists also discovered a skull with a crossbow bolt embedded in it. Archaeologists believe the skull may have been that of the First Emperor’s son, who was killed in the struggle for power following the emperor’s death.

Archaeologists and historians hope to discover the meaning behind these oddities as they continue their careful search through the ruins. However at least one area will remain off limits: the emperor’s tomb. Exposing the fragile artifacts likely left inside to air may damage them beyond repair. Instead, they will likely stay buried until new conservation technologies are developed that can better preserve the artifacts within.

Until then, some secrets will remain buried.