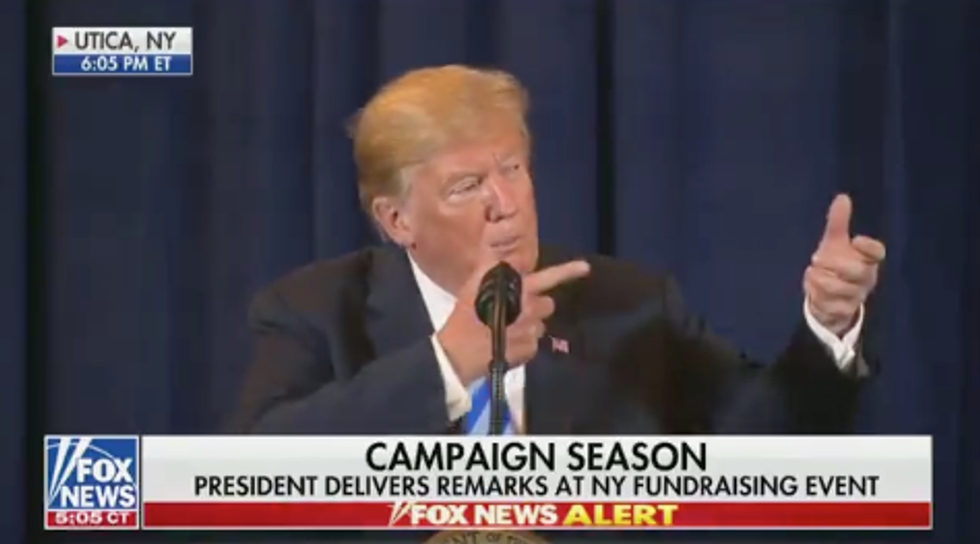 President Donald Trump made startling claims at a fundraising event in New York over the weekend, criticizing windmills as a source of renewable energy, advocating for coal instead.

Trump has long been a proponent of revitalizing the waning coal industry, despite increasing concerns over the logistics and environmental consequences of coal mining and power as countries across the globe begin a transition to renewable energy.

But this rant about why coal should remain king is bizarre even for him.

Trump goes on a bizarre anti-windmill rant, including mimicking a terrorist shooting one of them down https://t.co/2qyjer8C37
— Aaron Rupar (@Aaron Rupar) 1534198095.0

Trump started out railing against windmills -- and pipelines for that matter -- because "you can blow up the windmills." But know what the real danger for windmills is: birds.

Did you notice his weird sound effects?

The president's hatred of windmills is nothing new, of course.

Trump is obsessed with windmills. He has more than once brought the topic up with foreign leaders and ranted about… https://t.co/zIOlr7vROb
— Tom Wright (@Tom Wright) 1534722237.0

Although he does apparently have his reasons.

Except there are some problems with Trump's advocacy for coal:

While it's true that windmills kill hundreds of thousands of birds a year, the number is small compared to the millions of bird deaths from cell phone towers and billions from cats. What's more, hundreds of bird species are becoming endangered due to the threat of climate change, which is exacerbated by carbon-based energy sources such as coal.

That threat is likely to become more pronounced in the near future.

Trump's Environmental Protection Agency is expected to soon withdraw many Obama-era restrictions on coal emissions, instead opting to leave emission standards up to individual states.

It's a move that's expected to increase carbon dioxide emissions by up to twelve times the current rate. While it may keep many coal industries alive longer, costs of renewable energy are constantly lowering, rendering clean energy the preferable option for many companies.

Americans are trying to insist that the effects of bolstering the dying coal industry and undoing environmental standards laws could be disastrous in coming generations.

Dear @RealDonaldTrump , Climate change is real. It's happening now. Billions of us will be permanently affected b… https://t.co/eeYqG5aL3I
— Abdul El-Sayed (@Abdul El-Sayed) 1534600779.0

The unhinged statements and unnecessary sound effects had some questioning the president's mental capacity.

@ddale8 If your 71-year-old parent or grandparent said that to you in conversation, you'd be phoning their physicia… https://t.co/OJBrzVkGRj
— Mike Beauvais (@Mike Beauvais) 1534712998.0

@atrupar His speech is halted, then slurred in spots, at times he sounds lost and bewildered. Goes on tangents. This is abnormal.
— Alexandra Rosas (@Alexandra Rosas) 1534222371.0

A few compared his ire for windmills to the delusional literary character Don Quixote.

@AshaRangappa_ I thought about equating Trump with Don Quixote when he speaks of attacking the windmills but then i… https://t.co/Z4SXzLi4oi
— T. Filson Rogers (@T. Filson Rogers) 1534772362.0

The White House is expected to announce the new regulations on Tuesday. The United States is the world's second largest greenhouse gas emitter. While the Paris Climate Agreement pledged to cut those numbers by nearly 30 percent by 2025, that obligation evaporated when Trump announced that the United States would be pulling out of the agreement.

It seems that Trump and many of his supporters believe that if the coal industry is allowed to continue with few regulations, it will eventually regain its relevance and turn into a diamond. The belief, according to environmental experts, comes at the detriment of all Americans--many of whom have yet to be born.