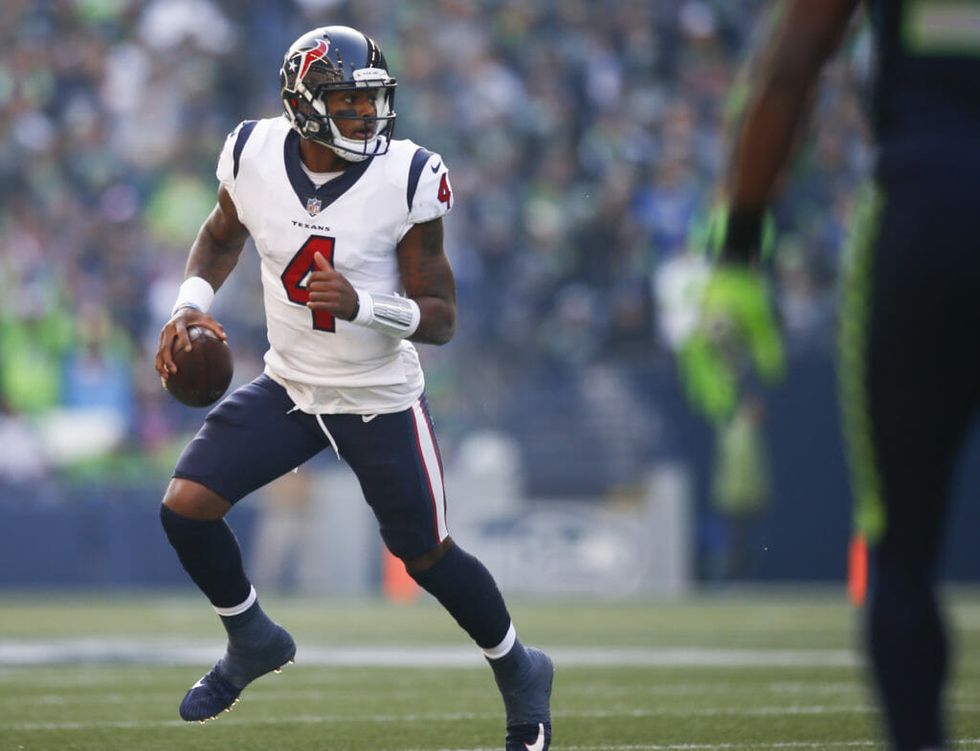 Quarterback Deshaun Watson #4 of the Houston Texans rushes against the Seattle Seahawks at CenturyLink Field on October 29, 2017 in Seattle, Washington. (Jonathan Ferrey/Getty Images)

Houston Texans star rookie quarterback DeShaun Watson tore his ACL at practice on Thursday, a striking and unexpected blow to one of the NFL’s premier teams. Watson suffered the injury on a non-contact play during practice, and now the Texans will be without one of their best players for the remainder of the season. The city of Houston was happily celebrating a World Series victory, but less than 18 hours later they will have to deal with a major damper on their Super Bowl hopes as their football team loses one of the best rookie QB prospects of the past decade.

The fallout goes well beyond just Watson and the Texans. His injury will have far-reaching effects across the NFL. Here are four things to consider in the wake of Watson's season coming to an early end...

1. Cam Newton's rookie records are safe for another year

The 12th overall pick of the 2017 draft had thrown 19 passing touchdowns already; the most ever by a rookie QB in his first seven games. Watson was on pace for 3,883 passing yards, 615 rushing yards, and 48 total touchdown passes, and that's without even playing in most of Week One's game against the Jaguars. Even a slight uptick in production would have given him a shot at eclipsing records set by Cam Newton in 2011. Unfortunately, the season-ending ACL tear means that Newton's records remain safe for now.

2. The Rookie of the Year race looks different

Watson was putting up a stellar 2017 campaign. As of now, the two-time Heisman finalist ranks first in the NFL in passing touchdowns, fifth in the NFL passer rating and second in yards per passing attempt. His numbers made him a frontrunner for Rookie of the Year, but now Kareem Hunt of the Chiefs and Leonard Fournette of the Jaguars would appear to be the leading candidates for the award.

3. The Jaguars and Titans each have a better chance at making the playoffs

The Texans will be forced to replace Watson with Tom Savage, or look at external options. The drop in talent from Watson to Savage is extreme and means that the playoff hopes of the 3-4 Texans have been dealt a huge blow. With this in mind, along with the poor performance of the Colts in Andrew Luck's absence, the Jacksonville Jaguars and Tennessee Titans (both 4-3) would now appear to be the favorites in the AFC South.

4. The Browns will benefit from the injury in next year's draft

The Texans already had a crowded injury reserve list that includes JJ Watt and Whitney Mercilus. The loss of their starting quarterback will further cripple the Texans; they'll almost certainly win fewer games in without Watson than they would have with him under center. A worse record for Houston, however, means higher draft picks the following season, and that's good news for the Cleveland Browns. The Browns own the Texans' first and second round picks in 2018, and now they'll have better players on the board to choose from than they probably would have if Watson had played the rest of the season.

Every injury has a wide-ranging impact beyond just the player and his team. Watson's accident is clearly no exception. We at Second Nexus wish DeShaun Watson a speedy recovery, and hope to see him performing well again in 2018.