Teens Take Broadway: 13-Year-Old Finds 'The Beat Goes On' at 'The Cher Show'

Magic mirror on the wall, who is the warrior goddess of them all? 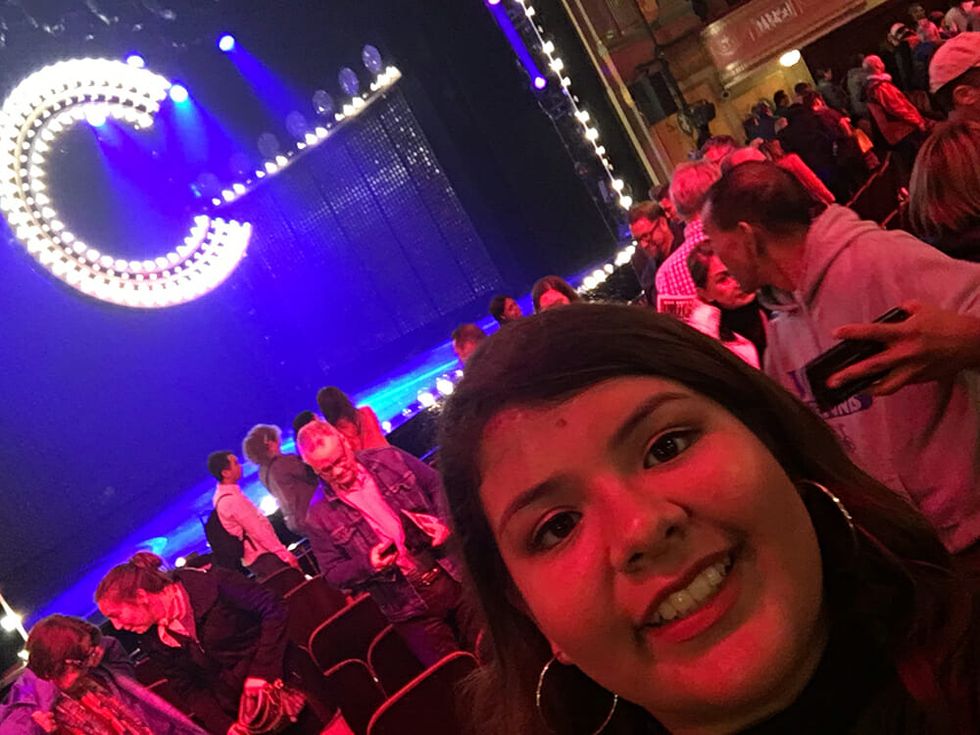 Gigi Sieke at "The Cher Show."

"The Cher Show" opened on Broadway on November 1, 2018, in previews, and officially on December 3, 2018, at the Neil Simon Theatre. After opening, the reviews came pouring in. The New York Times said the show had "gleefully staged musical numbers," while Rolling Stone praised the "trio of talented women" who all play Cher.

But what does a teen think? 13-year-old Gigi Sieke, who also reviewed "Head Over Heels," weighs in:

Magic mirror on the wall, who is the warrior goddess of them all? Cher, of course!

The Cher show is all about the one of a kind singer, actress, and comedian. This production is co-produced by Cher herself so you know this will be honest and raw. From the costumes to music, to the amazing cast, this is a must-see production.

The Cher show did such an amazing job at casting. Sonny and Cher sounded EXACTLY like Sonny and Cher. Michael Tacconi, the lucky man playing Sonny, in my opinion, had a very difficult role. He could either sound nothing like Sonny or exactly like him so I think he nailed it. When he sang the song “I Got You Babe,” I was all like, “Dang, this guy’s really good, it sounds almost like a recording.” That’s how well he did the part! This was also Michael’s Broadway debut!

But what’s the Cher show without Cher? This cast had three spot on replicas of Cher. Babe, Lady, and Star. All the three roles told a different time or part of her life. I loved when they got together and sang the songs, “Strong Enough” and “Bang Bang” and so many other great hits.

Gigi Sieke at "The Cher Show."

The youngest Cher, Babe (Micaela Diamond), was a naïve young girl when she moved out of her mother’s home. She never lived on her own. Cher gave all of her trust to Sonny and he accidentally lost it in Las Vegas. Cher believes that “fear holds you back, love opens you up.” She had a child and lived happily ever after… oh, wait that’s the wrong ending.

Lady (Teal Wicks) was the start of a new page in Cher’s life, where her inner warrior goddess began to show. “Warrior goddess” means that you could be on your last leg, your last penny, but you find a way to rise from the ashes—be the badass you were born to be.

Lady was a sassy little smart mouth. She was very quick witted so she was perfect with her comedic timing. “The Sonny & Cher Comedy Hour” was very favored at the time, but the work was just non-stop. In the show, Lady said, “Fame is a fleeting bitch.” I honestly laughed out loud. Her and Sonny’s relationship was also in the rocks. They sang the song “Living in a House Divided” to symbolize their relationship. That song really hit me like, “Dang! O.K., Cher, that hurt.”

Star is the real star tonight, and let me tell you, she is shining bright! She is the part of Cher that was older, wiser, and she was really zen with herself. She figured out the single life is the BEST life! It’s time to party! Oh. Star knew that she could always go back home to her family, who love and support her.

In this part of Cher’s life, Sonny died. Cher took this really hard, she was self-reflecting. She self-reflected her deepest thoughts, the good and bad, memories with Sonny, and looking into her self, what would she do next, what’s next in life. What’s so cool about this scene was the mirror of what looked to me like little small broken glass. All three of the Chers sang of self-reflection as they were mourning for Sonny. That scene made me want to grieve with them.

Not only was “The Cher Show” amazing… but the costumes! The costumes are absolutely stunning. As the co-producer, Cher wanted to have Bob Mackie be the costume designer. Bob Mackie wanted to design for the show, too. He already had all the sketches from Cher’s looks on tour to looks on showbiz. He has collaborated with people like Elton John, Judy Garland, Tina Turner, Liza Minelli, RuPaul, and last, but not least, the beautiful Cher.

The costumes were fascinating as the glitter caught the light from the stage. During the Las Vegas scene, I just wanted to go up there, put on a little glittery dress, grab those feathers and try to dance/fan myself at the same time. The costumes are almost as perfect as the singing. Bob Mackie, you did an amazing job on re-creating all of Cher’s looks. Everyone needs to give him a fabulous round of applause.

At the beginning of a young age, Cher could memorize a song just by a blink of an eye. She is dyslexic, so she couldn’t read as well as others. This was a big problem when it came to signing contracts with your soon to be ex-husband all about YOUR very own company! But on the other hand, it was a gift from the gods. If not for those perks of being dyslexic—like creativity—she would just be some average Joe. Cher was just a little girl when she started to sing, she had a voice like an angel. Right after seeing the movie “Cinderella” for the first time, she knew the whole song “A Dream is a Wish Your Heart Makes.”

Cher’s mother always told her to, “Sing the song that makes you strong.” And look at where that got her.

Now… If you can turn back time, fast forward time, or teleport in time, you need to be at the next performance!

Warrior Goddess, you are baddest chick this world has ever seen.