Carly Fiorina: If at First You Don’t Succeed, Try Running for President. 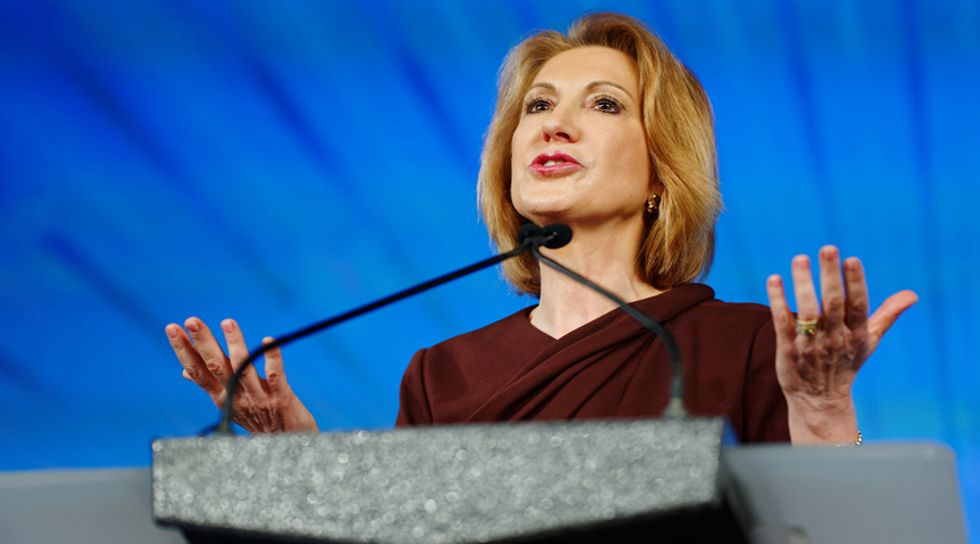 Just a little over a month ago, Carly Fiorina was polling so poorly that she didn’t make the cut to appear at Fox News’ mainstage Republican Presidential debate; instead, Fiorina appeared at Fox’s ‘kid’s table’ event alongside several second-string Presidential hopefuls, including Lindsey Graham and George Pataki.

Today, Fiorina is on fire. She emerged as the clear winner of the CNN debate on September 17th, and Republican support for Fiorina immediately shot from 3% to 15%. That put her in second place, a point ahead of Ben Carson and only nine points behind Donald Trump. [EDITOR'S NOTE: According to a poll conducted by Fox News from September 20-22, Fiorina has slipped slightly and is now at 9%, 9 points behind Ben Carson at 18%.]

Fiorina even seems to have pulled a few of those points away from the big man himself -- perhaps due in part to how she handled Trump’s recent disparaging remarks about her appearance. Trump suggested that no one would vote for Fiorina because of her looks, but Fiorina fired back with an ad campaign. The campaign not only addressed Trump’s jibe but also seems to have effortlessly accomplished what the GOP has had so much trouble doing: reach out to women voters without insulting them.

And now -- after her stellar performance on CNN and her masterful handling of Trump -- it seems that Carly has nowhere to go but up.

Fiorina: the Woman; the Myth; the Legend

Originally from Austin, Texas, Carly Fiorina’s father was a law professor and her mother was a painter. She graduated from Stanford University and then went on to law school at the University of California at Los Angeles. According to a 1999 Bloomberg Businessweek article, “Carly went to … law school to follow in her father's footsteps. But after a semester, she realized she hated law. Although she says that telling her father she was leaving UCLA was

one of the hardest things she ever had to do, it gave her a sense of freedom to do whatever she wanted with her life.”

And so, Fiorina began her career by dropping out of law school to become an AT&T sales rep. But that initial failure ended up leading to an almost improbable level of success. Fiorina climbed the corporate ladder at AT&T, eventually becoming a Senior Vice President at Lucent Technology (the first woman to hold that position in the company). Afterwards, she went on to become CEO of Hewlett-Packard.

Forbes named Carly Fiorina the most powerful woman in business for six straight years. Looking back, however, Fiorina’s corporate legacy is a bit of a mixed bag. Scott Woolley of Fortune Magazine reports that at Lucent, “[i]n 1997 Fiorina took over the group selling gear to ... ‘service provider networks.’ The company reported that sales to such networks climbed from $15.7 billion in fiscal 1997 to $19.1 billion in 1998. In 1999 they hit an amazing $23.6 billion.”

Many credit Fiorina as the architect behind Lucent Technology’s rapid growth in the late ‘90s, but since that time she has been criticized for leading the charge at an unsustainable, and some argue irresponsible, rate. According to Woolley, during her tenure at Lucent “Fiorina made it known that Wall Street would generously reward companies that emphasized and delivered robust revenue growth.” Woolley quotes an unnamed Wall Street executive, who knew Fiorina, as saying “[t]he press release was always very important to her.” In short, Fiorina may have shown more concern for short term success and the appearance of growth than for creating sustainable, long-term business models.

Fiorina was eventually tapped to become the CEO of Hewlett-Packard, making her the first woman to lead a Fortune 50 company. On one hand, it is a remarkable, glass-ceiling-

shattering achievement; on the other hand, Fiorina did not pull back on the rapid-growth-throttle, overseeing a clunky merger with Compaq.

Fiorina argues that while she was at the helm, Hewlett-Packard doubled in size and “grew jobs,” but the way Fiorina characterizes that growth is misleading. According to Glenn Kessler of The Washington Post, the growth Fiorina cites is based on revenue before and after the merger with Compaq. Kessler points out that Hewlett-Packard’s “net revenue was $42.37 billion in 1999 and $86.7 billion in 2005. That’s certainly double, but the key factor for the jump in revenue was Fiorina’s decision in 2001 to merge HP with a rival company, Compaq. In that year, Compaq had revenue of $33 billion and HP had revenue of $45 billion, or a combined total of $78 billion.” Through the merger with Compaq, Fiorina also pushed HP to delve further into the incredibly competitive computer market rather than focusing on HP’s time-tested products, like printers; it was a move that failed to pay off.

As for Fiorina’s claims about growing jobs -- they’re similarly suspect. Fiorina points to the fact that Hewlett-Packard had 84,800 employees in 1999 and that number rose to 151,000 in 2004. According to Kessler, “[o]n paper, that certainly looks like an increase in jobs. But before the merger with Compaq, HP had 86,200 employees and Compaq had 63,700 employees.” That means that prior to the merger, the number of employees working for both companies was 149,900. Fiorna didn’t so much create jobs as move them around. And after the merger, a whole lot of people lost their jobs. Approximately 30,000 workers were laid off as a result of Compaq merger.

Ultimately, Hewlett-Packard’s Board of Directors fired Fiorina in 2005 as the company’s stock took a nosedive. Fiorina landed just fine, however, after receiving her “golden parachute” that included $21 million in cash and $19 million in stock and other benefits.

Though she kept a low profile for a few years after being ousted from HP, Fiorina did write a memoir entitled Tough Choices. Then, in 2008, she slowly began to ramp up her public profile. Acting as chairperson for the Republican National Committee’s “Victory ‘08” committee, Fiorina appeared at a series of events where she touted the many charms of then Presidential hopeful, Senator John McCain.

For a while it seemed that she might be a candidate to be McCain’s Treasury Secretary or even Vice President. But after McCain discovered his gun-toting Alaskan governor, things began to fall apart; the catalyst was a negative comment Fiorina made when asked whether

she believed that either Senator McCain or Governor Palin could run a large corporation. Shortly after making the statement, Fiorina stopped appearing in support of McCain.

Two years later, on the heels of a battle with breast cancer, Fiorina decided to run for Senator in California; she hoped to unseat Democrat Barbara Boxer. Ultimately Fiorina won her battle with cancer, and she easily won the primary. She lost the election, but it was a close race until the very end.

Welcome to the Republican Presidential debate. Do Facts Matter?

During the CNN debate, Fiorina came out against Planned Parenthood with an impassioned statement about having witnessed video of a live, aborted fetus dying on a table. Fiorina challenged President Obama and Democratic Presidential candidate, Hillary Clinton to watch the controversial videos recently released by the Center for Medical Progress, a conservative pro-life organization: “Watch a fully formed fetus on the table, its heart beating, its legs kicking while someone says we have to keep it alive to harvest its brain.”

Her comments were a showstopper at the event, but in the days following the debate it became increasingly clear that Fiorina’s claims about the images in the video were off target. The image she described was not related to Planned Parenthood at all. Moreover, the fetus depicted in the touted video was not an aborted fetus but rather a stillborn child. When pressed about whether her statement was accurate, both on Good Morning America and later on Fox News, Fiorina refused to back down. She told George Wallace “I’ve seen the footage and I find it amazing that all these supposed fact checkers claim it doesn’t exist. I will continue to dare anyone that wants to [continue to fund] defund Planned Parenthood, to watch the videos.”

From a factual standpoint, she is wrong. But from a political standpoint, she may be making the right call. As David Graham of The Atlantic points out, the comments were almost certainly aimed at scoring easy political points among pro-life Republicans and forcing the mainstream media to recirculate the videos; in the short term, whether or not her claims were true doesn’t really matter as much as attracting attention to the issue, and to herself.

Fiorina has gained a lot of support in the past few weeks, and indicators suggest she will continue to rise in the polls -- at least for now. Her successes in the private sector, after all, are significant; Fiorina is right to point them out. But as the Republican field narrows, she may do well to shift course and focus on the facts rather than attempting to embellish an already impressive record. And while it may have been a high scoring move in the short term, Fiorina’s inflammatory statements about Planned Parenthood may come back to haunt her; no one expects Fiorina, a long time abortion opponent, to ease up on an organization that provides abortion services, but there’s plenty of time between now and November for her to be taken to task for distorting the facts. It seems that the key for Fiorina will be not to fall back into the old pattern that got her into trouble in the private sector; after all, short term growth doesn’t win the long game.