Can Staceyann Chin Change the World’s Perception of Women? 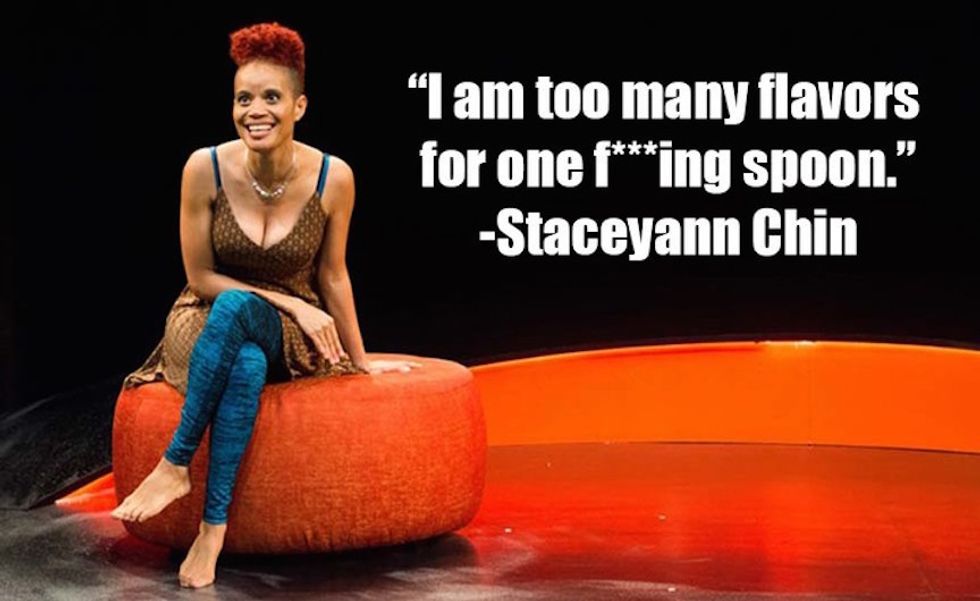 Who is the archetypal American single mother? Is she a divorced professional who juggles motherhood and a stressful career in a frenzied attempt to “have it all”? Or is she a young, unwed mother, unemployed and welfare-bound? The truth is, there is no archetypal single mother, regardless of what entertainment and media would have us believe. These two familiar extremes ignore the myriad ways in which women become single mothers, as well as the diversity of the women themselves. What about single mothers who happen to be lesbians, or women of color, or working class women? Those characters, and their struggles, aren't easily found on prime-time TV sitcoms or among book club selections.

Staceyann Chin is a multitasking single mother. When I first spoke with her, she was standing at the curb in front of her Brooklyn apartment building, one arm reaching out to hail a taxi to pick up her daughter, the other holding her phone to her ear. Sound familiar?

But Chin does not fit the stereotype of the frazzled working mother often portrayed in TV and movies. In fact, this writer, performer and activist wants to change the world’s perception of women. Her latest venture, the one-woman show MotherStruck!, is currently in performances at New York’s Culture Project. Chin's autobiographical performance chronicles her journey to willingly become a single mom, as well as her struggles with racial, sexual and economic prejudice before and after becoming a parent.

Chin’s story begins in Jamaica. Abandoned by her mother and separated from her brother, she was raised by an aunt who frequently warned her not to get pregnant. Until college, Chin’s greatest fear was of repeating her mother’s mistakes. At university, however, she came out as a lesbian, and her fears became more immediate. Her peers harassed and threatened her, and after a sexual assault, Chin moved to New York.

Throughout her performance, Chin references her aunt’s warnings—even as she recounts her struggle to get pregnant and raise a baby. Chin’s pursuit of motherhood includes marrying a gay man who died unexpectedly just shy of 30, a failed attempt at

artificial insemination, becoming pregnant through in vitro fertilization and continuing life as a single widow living in a small Brooklyn apartment. Her narrative offers a blunt and unapologetic look at a system that presents formidable obstacles to single black mothers.

Tony Award winner and “Sex and the City” star Cynthia Nixon, an out lesbian and mother, directs the play. Chin’s story seemed to strike a chord with her, as Nixon signed on within two hours of receiving the script.

Chin first began chronicling her pregnancy in a Huffington Post blog. She shared her emotional ups and downs, as well as struggles to entertain herself during doctor-mandated bed rest and registering for her baby shower. And with MotherStruck!, Chin has created a different kind of drama, one that stands out from the canon of theater that more often addresses strained relationships between fathers and sons. Since Chin is a gay, single Jamaican immigrant, the drama of MotherStruck! is most definitely female, addressing infertility, fear of miscarriages, a painful, lengthy labor and, of course, motherhood.

Chin challenges the stereotype of black mothers taking advantage of the system that enables them. Ronald Reagan brought us the “welfare queen,” or as Chin describes it, “The single black woman who is portrayed as sucking the system dry. Taking from the system. As if we do not owe her. As if her being a citizen and working in the world [is not enough].”

What’s more, Chin said her sexual orientation is still a taboo subject among some families. “Talking about LGBT families is kind of an oxymoron in the media in popular works. People fear that LGBT is a not thing [you can talk about], [being] lesbian is not a thing you can talk about with a kid, and therefore it’s not a family conversation.”

That conversation is slowly changing, Chin said, but not enough and certainly not fast enough. It’s an

uphill battle, she said, because the gatekeepers of the country’s power and policy continue to view the LGBTQ community as outsiders.

“It’s kind of wild to me,” she said. “I still have people in my life—and good people, too—who are a little bit uncomfortable telling their children, ‘Staceyann partners with women. She’s a lesbian.’”

Along with challenging the cultural norms of race and sexuality, Chin hopes the show will shatter audiences’ perception of “the unending self-sacrificing long-suffering mother who doesn’t complain and should do it happily.” Instead, she said, she wants to share how becoming a mother has changed her life for the better, despite her refusal to be the mythical happy housewife exposed in Betty Friedan’s seminal book, The Feminine Mystique.

“Your identity is completely changed, cracked open by the identity of this other person who all of the sudden takes urgent priority over you, especially in the first years,” she said. “All of your desires to go and be with your friends, have adult conversations… If you don’t have the support, people who allow you to do that, you really are stuck inside your own head, inside of your own house.”

But MotherStruck! isn’t just a story of racial or sexual identity or motherhood. It’s also a story about money. It cost Chin more than she expected to become expectant. After her first attempt at IVF, she discovered health issues that made pregnancy impossible, and the surgery that would correct it was not covered by insurance. Further medical and financial challenges arose, and Chin ended up

depleting her entire bank account to give birth to her daughter.

Yet the reality of becoming pregnant as a single lesbian was something Chin approached pragmatically and without idealizing the reality of motherhood.

“The idea of pregnancy is this glorious wonderful thing and women are glowing. Your body is expanding to 2-3 times its width, stretched beyond capacity... I don’t understand why it is we think about the process of pregnancy and motherhood as a monolith… I’ve felt more joy than I’ve felt in my entire life being this kid’s mom but I’ve also felt great despair and loneliness and sadness and removal from my life before.”

Mother and Daughter: Pro-Choice and Taking Up Space

Even though Chin has said she loves being a mother, she does not think her choice is one every woman should make. She is quick to say that being a mother has changed her, but her stance on reproductive rights remains the same.

“I thought that getting pregnant would make me unsure about being pro-choice, but having gone through the pregnancy, I’m so completely convicted with the notion that women should have a choice,” she said. “No one should be forced into the uncomfortable life-changing body snatching process of pregnancy. If you don’t want to you shouldn’t have it. It’s such an invasive process. If that pregnancy comes with motherhood… to give up 20 years of that time to care for a kid - that’s an unreasonable ask even if you believe that whatever is growing inside of me also has a right to survive. That right to survive does not trump my rights.”

If anything, Chin said becoming a mother has only enhanced her awareness.

“I’m surprised that more has not been written about this relationship where both of you are at the mercy of the patriarchy and pitted against each other in this misogynist anti-feminist way. Friendships between women are not explored in a real way. You see all kind of friendships between white men and black men, brothers, people who work in an office, in a basketball team... It stands to reason that they don’t think women are that important. How many stories do you

have about women generally without a man in it? This is why it matters to pick our pens, pick up our cameras, guitars and make our own stories and become captains of our own stories. Take charge of our own narrative in a direction that feel right and true to us in our own compass.”

Along with taking charge of their narratives, Chin also encourages women to take up space however they can, whether writing and performing in entertainment, sitting on New York’s subways or running for political office.

Chin is already teaching her daughter to take up space. The two have staged numerous “living room protests” that they film and share on YouTube, including one where they shared their support for Planned Parenthood, stating, “Our bodies are our own.”

“Now we have a woman running for office. Whether you like her or not, whether you agree with her, it means the nation is shifting in terms of how much space women take up. It’s a very small shift and that shift has to be forced to grow, to progress by taking up space, why all women should run for office, to take over the world if that’s what [my daughter] wants me to do. Then I’ll find some other person to groom. I’m hoping she’ll want to take up space in the world because it’s her right to do so.”

Motherstruck! runs through January 29 at New York’s Culture Project. Tickets can be purchased at Ovationtix.