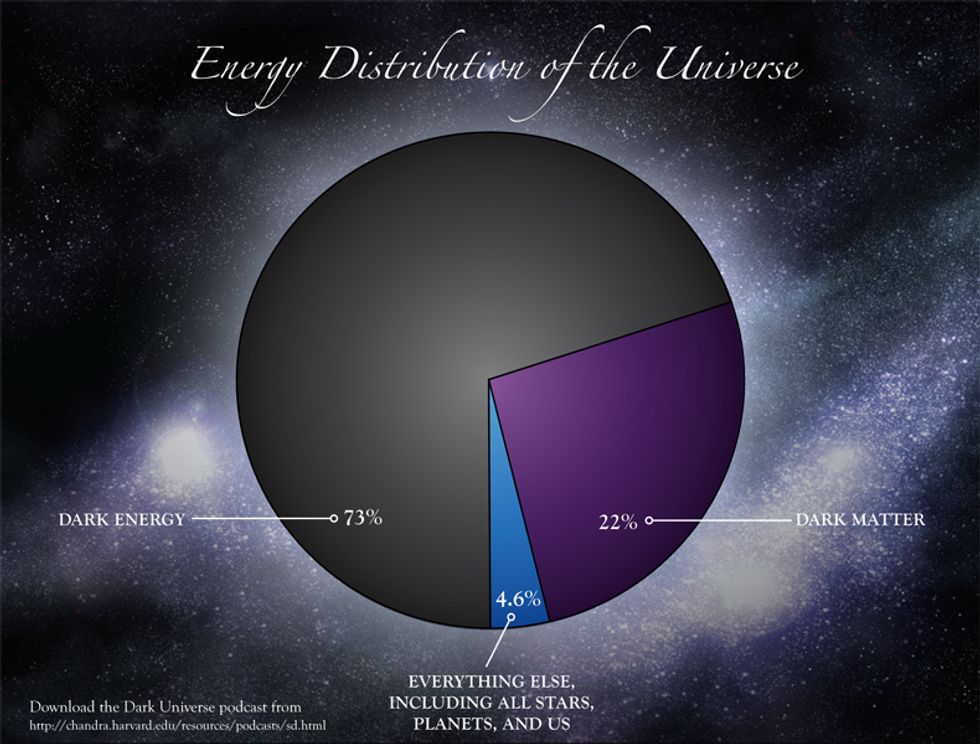 The Universe is huge. Because it is expanding and that expansion is accelerating, estimates have it stretching up to 93 billion light-years across, though the visible universe is only a mere 13.8 billion light-years across. This means most of the Universe will remain invisible, as its distant light has not had enough time to reach Earth. The Universe has very low density precisely because of its size. On average, a cubic meter of space contains only 5.9 atoms. The density of matter in the Universe, however, is only one atom per every four cubic meters of space. Matter itself is mostly empty space too; a typical atom is 100,000 times larger than its nucleus, and the nucleus contains 99.9 percent of an atom’s mass.

Researchers now believe they have found more than half of the Universe’s missing baryonic matter.

Although the mass of the Universe is known, astronomers have only been able to observe 10 percent of the amount of baryonic matter their models predicted. That’s because matter can only be seen if it’s illuminated or casting a shadow. Even though they couldn’t see it, models predicted 90 percent more matter than observed. Some of the missing matter lies in diffuse halos around galaxies, but this only accounts for a small percentage of the missing material.

In her report, lead researcher Anna de Graaff of the University of Edinburgh states that “cosmological simulations predict that the 'missing baryons' are spread throughout filamentary structures in the cosmic web.” Galaxies are linked together by filaments of dark matter, which gravitationally attract intergalactic gas. Filaments link galaxies together to create what astronomers call the Cosmic Web, which is a network of 24,000 galaxies with over 100,000 filaments connecting them.

At first glance, the structure looks eerily like neurons in the human brain. As light passes through the matter in the filaments, the CMB gets distorted. Using the Sunyaev-Zel’dovich Effect, de Graaff concluded that the amount of matter in the filaments “can account for ∼30% of the total baryon content of the Universe.” De Graaff’s team estimates the density of matter around the filaments is six times greater than the average universal density.

Operating independently from their colleagues in Scotland, Hideki Tanimura and her team at the University of British Columbia achieved similar results. Also relying on the Sunyaev-Zel’dovich Effect, Tanimura stated that “to our knowledge, this is the first detection of filamentary gas at over-densities typical of cosmological large-scale structure.” Because the density of matter in the filaments is higher than the cosmological average, the team concluded that this accounts for some of the Universe’s missing baryonic matter. This research confirms previous predictions that galactic filaments contain more mass than dark matter alone, though the mysterious substance accounts for 90 percent. The team predicts the density of the newly found matter to be three times the universal average.

Most Of The Universe Is Still A Mystery

Though significant, the recent findings only account for 30 percent of the Universe’s matter. Most of it is still missing. But even if all the missing matter were located, it would still not account for the remaining 95 percent of space. Dark energy and dark matter make up 71 and 24 percent of the Universe respectively, and neither is like anything with which humans are familiar. That’s because they aren’t made of ordinary, baryonic matter.

In 2001, NASA launched the Wilkinson Microwave Anisotropy Probe (WMAP) to study the Cosmic Microwave Background Radiation (CMB), which is the afterglow of the Big Bang. WMAP scanned space until 2010, and in 2003 it produced a map showing the leftover heat from the origin of the Universe 13.8 billion years ago. The images can be viewed here, and they show the Universe when it was only 300,000 years old. The CMB is used to predict how matter is distributed throughout the cosmos. Various hot and cold spots represent varying densities, which would eventually become galaxy clusters, filaments, and voids. Based on measurements from the WMAP, scientists calculated the density of the Universe, from which they calculated its mass.

The Universe’s mass is approximately 71 percent dark energy, 24 percent dark matter, and roughly 5 percent baryonic matter. People, planets, stars, and galaxies are made of baryonic matter. Mind-blower: all matter, at its most fundamental, is nothing more than three quarks and one electron. That’s all there is to everything we can observe, measure, and experience.

A proton and its three quarks. (Wikipedia Commons)

Technically speaking, baryons are subatomic particles that are made of point-like units called quarks; protons and neutrons, the building blocks of the nucleus of atoms, are each made of three quarks. Thus, only protons and neutrons are baryons by definition.

Electrons are part of a different particle family known as leptons. Unlike baryons, electrons and other leptons, like neutrinos, do not have smaller building blocks. In other words, leptons are fundamental; they can’t be broken down into smaller units. Neutrinos are tiny subatomic particles with no electrical charge. Though neutrinos are the most abundant particles in the Universe, detecting them is difficult, because they rarely interact with normal matter. Electrons and neutrinos are also unaffected by the Strong Nuclear Force, which holds atomic nuclei together.

In cosmology, however, anything containing protons, neutrons, and electrons is considered baryonic matter, since most atoms contain all three.

The other 95 percent of the Universe’s composition, dark energy and dark matter, are not directly observable with current technology.

Dark energy drives the accelerating expansion of the Universe, but no one knows exactly what it is. Scientists simply don’t have enough data to devise a testable hypothesis. By observing the motions of distant supernovae, the Hubble Space Telescope found that the Universe expanded more slowly in the past than it does today. This discovery confirmed that space contains a force far more powerful than the gravity of matter and dark matter, causing the Universe to expand. The bigger space gets, the faster it accelerates. The Universe will continue to expand forever, eventually becoming cold, dark and empty. The last particles and photons will decay into nothingness, in roughly a googol (10^100) years, in what scientists have termed the eventual heat death of the Universe.

Dark matter, though it accounts for a quarter of the Universe’s mass, is also a mystery to even the best scientific minds. Its composition is unknown. Directly observing dark matter is impossible because it doesn’t emit or reflect light, nor does it interact chemically with ordinary matter. It does, however, have gravity, and its presence can be measured when its gravity tugs on normal matter. In 2016, astronomers discovered a galaxy made of 99.99 percent dark matter. Named Dragonfly 44, it lies 300 million light-years from the Milky Way in a group of galaxies called the Coma Cluster. Although it’s the same size as the Milky Way, Dragonfly 44 emits only 1 percent as much light. Because it is so dim, astronomers concluded that most of the galaxy must be made of dark matter, as there aren’t enough stars to hold the galaxy together gravitationally. Dark matter is also found in galactic halos and filaments connecting galaxies.

Dark matter permeates all of space. In fact, there are billions of dark matter particles passing through every person on Earth every second. Leading theories suggest that dark matter is made of WIMPs, short for Weakly Interacting Massive Particles. Physicists are searching for WIMPs by smashing subatomic particles together in particle accelerators, such as the Large Hadron Collider (LHC) at CERN in Switzerland. Other candidates for dark matter include theoretical particles called axions, which have low mass and no electric charge.