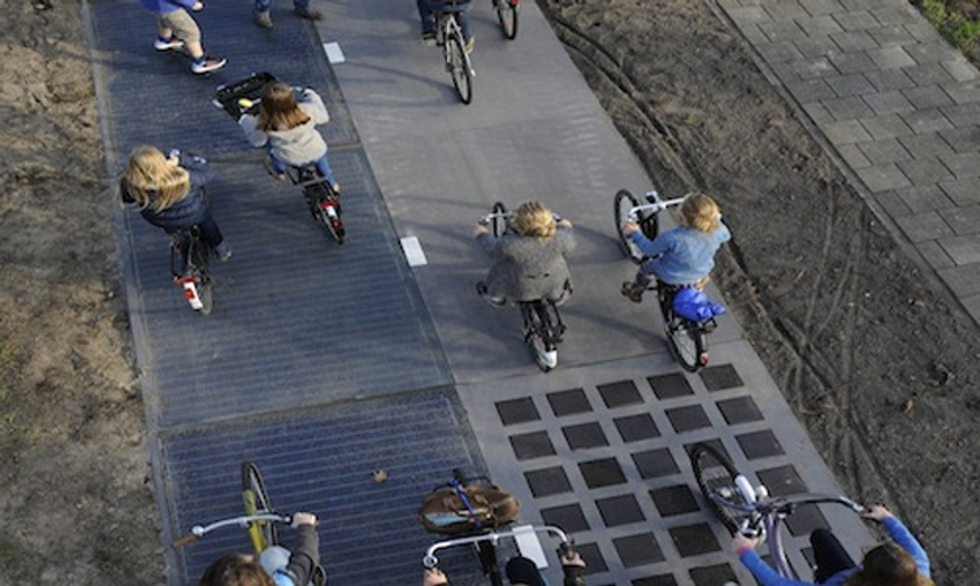 The world's first solar road, located in the Netherlands, has only been open for six months but is already producing more energy than expected.

SolaRoad has produced over 3,000 kilowatt-hours of energy since opening in November 2014, according to Think Progress. The spokesman for this public-private partnership project, Stan de Wit, spoke of its success in a recent statement:"[w]e did not expect a yield as high as this so quickly."

Used primarily for bike traffic, the 230-foot stretch of road is embedded with solar cells and protected by two layers of safety glass. The project is perfect for the sustainability-conscious, bicycling-heavy society of the Netherlands. One of the developers of SolaRoad asserts that although it is primarily used for bikes, the road could withstand heavier traffic.

Creators of the SolaRoad have stated that they will be researching the efficiency of this bike lane road for the next few years. They hope that if it proves both successful and energy-efficient, it will lead to more solar bike lanes and roads. Project developers also hope to extend the SolaRoad to 328 feet by next year.

An American couple is hoping to make the development of solar roads a reality in the U.S. as well. Scott and Julie Brusaw started an Indiegogo campaign in 2014 which has already raised over $2 million to develop heavy-duty solar panels. Solar roads still have a ways to go in the U.S. According to a Vox article, the biggest hurdle for solar roads being built in America is the cost. Safety is another concern that worries government officials.

A 2014 Greentech Media article discusses these safety issues. American engineers want to be certain that the glass that protects the solar panels will not break and that the actual roads can withstand heavy amounts of traffic. So far the only thing close to a solar "roadway" in the U.S. is a grouping of panels in an Idaho barn that tractors drive over on a daily basis. Most American officials aren't optimistic about solar roads being a reality anywhere in the near future.

The Netherlands are just one of many places that are making environmental sustainability an important priority. To read more about what is being done here in the States, check this out: San Francisco becomes the First City to Ban Sale of Plastic Bottles.