The World's Largest Telescope Has Detected Pulsars, Can Aliens Be Far Behind? 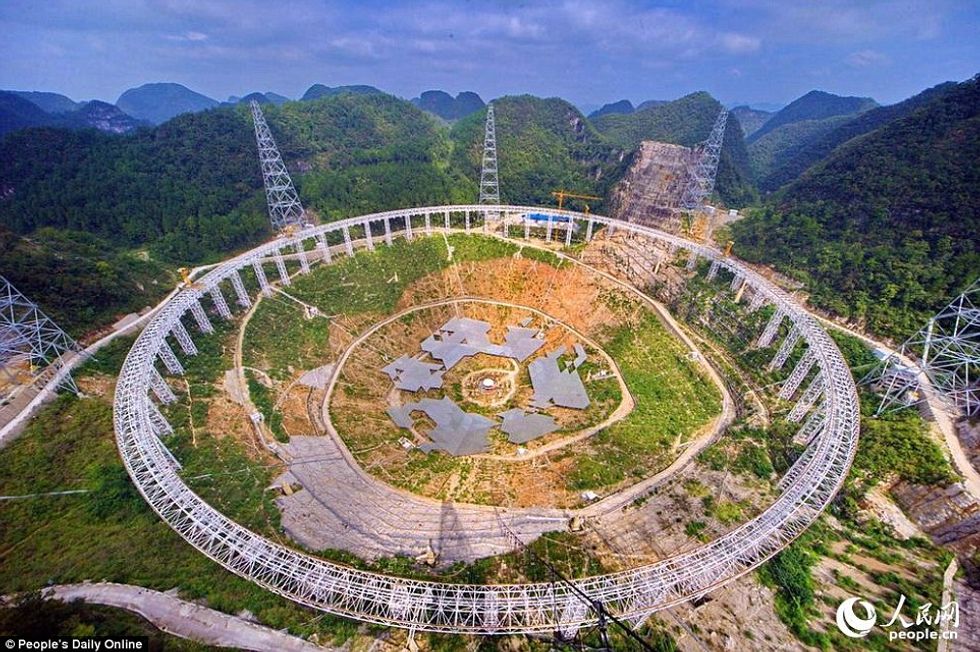 Deep in the rural Chinese Guizhou Province lies the largest radio telescope on the planet. The Five-hundred-meter Aperture Spherical radio Telescope (FAST) is the size of 30 football fields, and according to China Daily, is sensitive enough to hear a cell phone conversation on the Moon. After only a year of trial operations, FAST has found two pulsars in the Milky Way. FAST’s initial success is a promising preview of future discoveries and is even more impressive considering that China struggled to find scientists to operate it. FAST owes its initial success to chief scientist Nan Rendong, who died of lung cancer in September 2017 after spending 22 years planning and building humanity’s largest ear to the Universe.

What Is FAST Searching For In Space?

FAST will study pulsars, radio wave sources, neutral hydrogen and interstellar molecules to help astronomers create a more detailed map of the Universe, as well as a better understanding of interstellar chemistry. It also is tasked with listening for signals from other intelligent life, as the Search for Extraterrestrial Intelligence (SETI) has done for more than three decades. So far, however, SETI has not found anything, which raises doubts about whether humanity has neighbors in space.

Since officially commencing operations in 2016, FAST has detected two pulsars 16,000 and 4,100 light years from Earth. Pulsars are rapidly rotating neutron stars, and 2,700 have been identified in the Milky Way since Jocelyn Bell Burnell and Anthony Hewish first observed them in 1967. Because they rotate at regular intervals, pulsars serve as reliable beacons in space, which is helpful for determining the distance and age of objects near a pulsar, such as a black hole or a companion star. FAST’s extreme sensitivity will enable the discovery of more and diverse types of pulsars, such as binary systems of a neutron star and black hole. Such a system would generate gravitational waves; ripples in the fabric of spacetime from the interactions of massive objects. Gravitational waves hold clues to the nature of gravity.

Pulsar analyses also help astronomers learn how matter and energy behave under extreme densities, and neutron stars are about as extreme as it gets. They are so dense that protons and electrons are forced together, creating neutrons. Studying matter in extreme environments like neutron stars will provide more insight into how matter behaves at the subatomic level. Currently, quantum mechanics, the area of physics used to explain subatomic particles, is incompatible with general relativity, which describes spacetime on the macro-scale.

FAST will scan areas of space for various sources of radio signals, known as the Radio Transient Sky. In addition to pulsars, the Radio Transient Sky includes supernovae, gamma-ray bursts, and Jupiter, which emits large amounts of radio waves. Surveying sources of radio waves, including gathering more information about the Cosmic Microwave Background, will allow astronomers to map the Universe in greater detail.

Is There Anyone Out There?

Finding evidence of other intelligent life in the Universe would most certainly be humanity’s greatest scientific achievement. Since 1985, SETI has scanned thousands of stars for alien transmissions, from its 305-meter radio telescope in Arecibo, Puerto Rico, as well as the Allen Telescope Array. Project Phoenixbegan in 1993 as the successor to the original SETI program, and is to date the most comprehensive search for extraterrestrials humanity has ever undertaken.

FAST is larger and much more sensitive than SETI, both of which are tasked with detecting signals from other intelligent beings in the Universe, assuming they exist. Since intelligent life on Earth relies on water, the search for life, logically, follows the water. Astronomers can scan radio frequencies in what SETI calls the water hole. With its ability to scan thousands of star systems, FAST can use the frequencies of hydrogen, hydroxyl and water as a starting point.

According to SETI, “hydrogen atoms emit at 1420 MHz (a wavelength of 21 cm).  Hydroxyl molecules, composed of one atom of hydrogen and one atom of oxygen (OH), emit at four specific radio frequencies ranging from 1612 MHz to 1720 MHz.  When a hydrogen atom combines with a hydroxyl molecule it forms a molecule of water, the essential molecule for life as we know it. Thus, the range of frequencies from 1420 to 1720 MHz is called the Water Hole.” Using the frequency of hydrogen to detect alien transmissions was popularized in the movie Contact. The signal Jodie Foster’s character picks up had a frequency of hydrogen x pi.

“Two possibilities exist: either we are alone in the Universe or we’re not. Both are equally terrifying.” – Arthur C. Clarke.

The Universe is nearly 14 billion years old and likely 100 billion light-years across. Space contains hundreds of billions and possibly an infinite number of galaxies. Intelligent life evolved on Earth, so it would seem likely, given the age and size of space, that it evolved elsewhere, too. And if it did evolve in some distant galaxy or around a star in our own galaxy, such a civilization would be far older and incomprehensibly more technologically advanced than humans. Given the potentially multi-billion-year head start by our interstellar cousins, the odds seem to favor intelligent life arising somewhere besides Earth. So - where is everyone? Why is space seemingly cold, dead and quiet?

If human beings can spread out beyond Earth, as we’ve been attempting since the 1950s, then it’s realistic to assume other intelligent species could do the same. And it shouldn’t take long, maybe a few million years, to colonize a galaxy. But astronomers neither see nor hear any evidence of this, whether in the Milky Way or in any of the countless galaxies out there. If galactic civilizations are out there, they should have a large enough presence to be visible with optical telescopes. Yet, we see nothing. Why? It’s certainly possible that humans simply haven’t scanned enough stars, or that our telescopes aren’t yet powerful enough to observe anyone else out there.

The possibilities are as profound as they are disturbing. Humanity’s first broadcasts into space were only about 100 years ago, which means only beings within 100 light years would be able to hear us. Assuming they can, and they choose to respond, it’s possible that there hasn’t been enough time for astronomers to detect a reply. But therein lies the first problem. Our most powerful telescopes, like Hubble and Kepler, can easily see stars within that distance from our solar system. They see no signs of anyone out there. Stars like the Sun are common, and so are planets, and this is the crux of the Fermi Paradox. With so many places intelligent life could have arisen, the silence of space forces a terrifying possibility: that we are, in fact, alone. The Fermi Paradox offers the concept of “filters,” which are challenges that intelligent civilizations need to overcome to spread out into the Universe. Could intelligent species annihilate themselves when they reach a certain technological maturity? Humanity currently faces this, due to the threats of climate change, nuclear proliferation, and bioengineering conjuring up a pathogen that wipes everyone out.

Perhaps the most chilling option, however, is that humanity is the first intelligent race in the Universe, meaning there is no paradox at all. We could simply be alone. At 14 billion years old, the Universe is still quite young. Stars will continue to shine for another 100 trillion years. On a human scale, if those 100 trillion years were condensed into 365 days, then the Universe has only existed for 1/15 of a second. That leaves a really long time for intelligent life to pop up somewhere besides Earth. Scientists will, of course, continue to search, and projects like FAST are the next step in the potential detection of neighbors in our Universe – if they’re out there.