Many seek answers in the wake of Sunday night's massacre in Las Vegas. 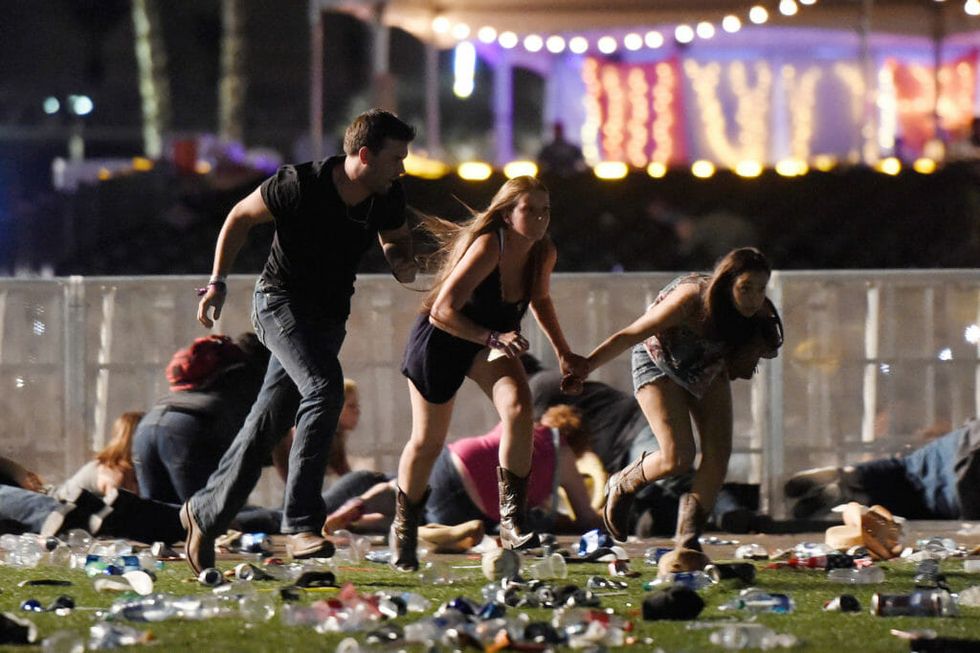 LAS VEGAS, NV - OCTOBER 01: People run from the Route 91 Harvest country music festival after apparent gun fire was hear on October 1, 2017 in Las Vegas, Nevada. A gunman has opened fire on a music festival in Las Vegas, leaving at least 20 people dead and more than 100 injured. Police have confirmed that one suspect has been shot. The investigation is ongoing. (Photo by David Becker/Getty Images)

Stephen Paddock committed the worst mass shooting in American history over the weekend, killing 59 people and injuring more than 520 others, after opening fire on country music festival attendees from the 32nd floor of the Mandalay Bay Resort and Casino. It seems almost routine––there have been at least 1,518 mass shootings since 2012’s Sandy Hook massacre, according to the Gun Violence Archive––and as the calls for gun reform mount yet again, the public is left leafing through the names of the dead and parsing through whatever details investigators can glean from Paddock's life to better understand why he decided to murder in the first place.

The Washington Post sparked controversy yesterday after its editors published an article which appeared to normalize Paddock's actions, describing him as a "high-stakes gambler who 'kept to himself'" before the killings, and while the article is symptomatic of a much larger problem (white American men––who are later memorialized by the media––with no connection to Islam pose a greater domestic threat than Muslim terrorists or foreigners), the general sentiment, that of shock from the murderer's relatives and loved ones.

Eric Paddock isn't exactly wrong. Mass shootings can be motivated by terrorism, and President Donald Trump has regularly been accused of making light of domestic terror incidents, conflating them to mean "radical Islamic terrorism." But Stephen Paddock, a wealthy 64-year-old real estate investor, had no connection to the Islamic State, which claimed him both as a member of the group and as a late convert to Islam––authorities have not corroborated that claim––and, with the exception of a now-resolved minor citation, had had no prior run-ins with law enforcement. Paddock even held a private pilot license and would have had to prove that he hadn’t been diagnosed with psychosis, bipolar disorder or any severe personality disorder. Neighbors gave conflicting reports; some described him as "friendly," and others not so much, but Paddock, they said, gave no indication of the extreme anger, the thought of working for a cause greater than himself, that is so characteristic of mass shooters.

Nor was Paddock a loner. He had a girlfriend, 62-year-old Marilou Danley, who was in the Philippines at the time of the killings, and had been married once before to a woman named Peggy Okamoto who now lives in Southern California. Criminologist James Alan Fox contends that mass murderers are "enabled by social isolation" and typically experience "years of disappointment and failure that produce a mix of profound hopelessness and deep-seated resentment." Paddock defies this stereotype, too. He cannot be compared to 22-year-old Isla Vista killer Elliot Rodger, who uploaded to YouTube a video explaining that he wanted to punish women for rejecting him, before killing six people and injured fourteen others. His case, as far as anyone can tell, does not bear any similarities to that of Christopher Dorner, who declared "unconventional and asymmetric warfare" upon the Los Angeles Police Department in retaliation for his dismissal.

The most unusual thing about Paddock is actually about his father, Benjamin Hoskins Paddock, who once appeared on the FBI’s Ten Most Wanted Fugitives list from 1969 to 1977. The elder Paddock was a notorious bank robber who escaped a Texas prison and ran a bingo parlor in Oregon before the state attorney general filed seven bingo-related racketeering charges against him. An FBI wanted poster once described Benjamin Paddock as "armed and very dangerous," a man who had been “diagnosed as psychopathic." Stories of "Bingo Bruce"––as the elder Paddock referred to himself––have already begun to proliferate on social media. That Stephen Paddock could have inherited some of his father's traits seems an easy explanation, too easy perhaps. At the moment there is still so much we do not know.

“When we talked about a month ago, I can’t believe he was planning this,” said Eric Paddock, who struggles to comprehend the magnitude of his brother's crimes. “But he must have. It takes time. Something broke in his head is the only thing possible. Did he have a stroke? I’m hoping they cut open his brain and find something. There’s a data point missing.”