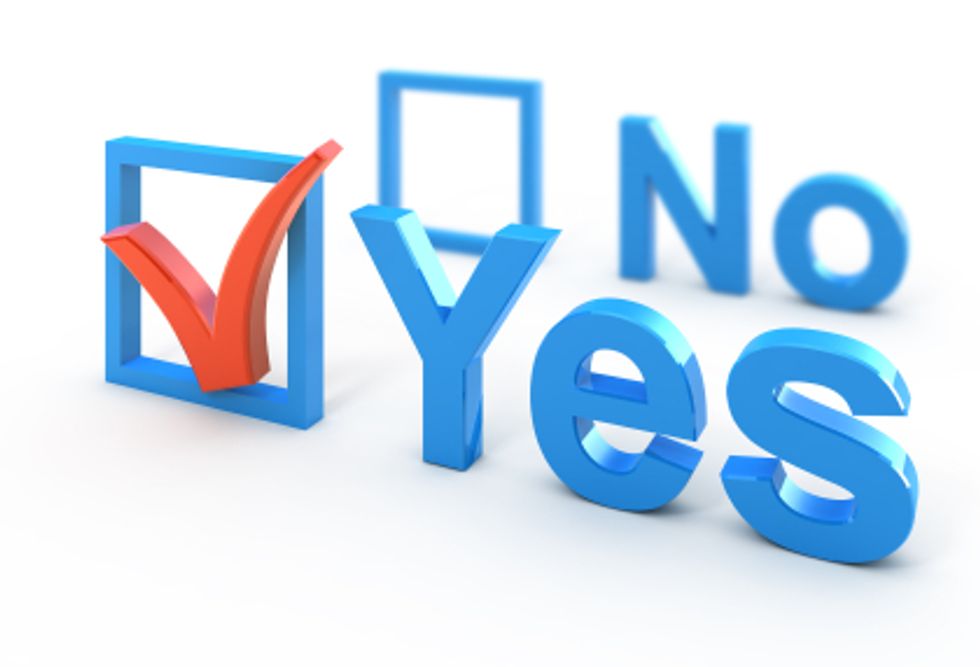 When was the last time you said “yes”? Not in the figurative way—consenting to a request, acknowledging something delightful, embracing a generally optimistic outlook toward the world—but in the extremely specific way? When was the last time you reacted to something not with a “yeah,” or an “mm-hmm,” or an “oooooh,” or a “definitely,” but with a blunt, mono-syllabic—and out-loud—“yes”?

I can’t remember the last time I did. Possibly that's a sign that I’m a negative person whose glass is always half-dry and who literally just can't, but it’s probably also the result of a more general phenomenon: At this point, the scenarios in which anyone would actually say—or actually type—“yes” are increasingly scarce. When you’re filling out a tax form, and indicating whether or not you have your W-2 on-hand? Sure, yes. When you’re seated in an exit row on an airplane, and must aurally confirm your willingness to assist in an emergency? Yes. When you’re writing a thing on the Internet, and listing some of the remaining uses of the word “yes”? Yes.

Beyond that, though, many of us have been saying “no” to “yes.” The term has adopted an alienating formalism—like beginning an email with “Dear so-and-so” or ending a text with a pissed-off period. It’s become, at this point, a little bit passive-aggressive. (In a glossary of affirmations published last year, BuzzFeed interpreted the fuller meaning of “yes” as “I’m just trying to be clear. Also, I might not like you.”)

So our most basic term of affirmation, derived from the Old English gese (“so be it”), has come, recently, almost to negate itself: “Yes,” especially in the hyper-sensitive context of digital communications, has come to mean something more like “no.” “Everything okay?” I text. If he replies with a simple “yes,” rather than a “yeah” or a “totes” or a thumbs-up emoji, I understand immediately that everything is not, in fact, okay. (And if he replies with “Yes.”—with the caps! and the period!—then, oooooof, things are actively bad.)

So, yeah. Totally. Mmmmhmmmm. “Yes” is becoming outmoded in a world where out-of-context formality can be read as a sign of frustration or all-out hostility. Which is not, of course, an entirely new thing. We’ve long sought and found alternative ways—gentler ways, more nuanced ways—of offering affirmation to each other. “OK” and its cousin “okay,” rumored to be an appropriation of a typo, have been in use since the mid-1800s as a means of giving casual consent. “Sure,” an abbreviation of “sure thing,” also came into use in the U.S. in the 1800s, and has remained part of our vernacular ever since. The 1980s saw the rise of “yeah”—a re-embrace of the centuries-old “yea”—with the term enjoying a steady upward trajectory since then. “Yep” has taken a similar path. So has “yup.”

The Internet, however—which is, on top of everything else, an amusement park for language’s ludic functions—has recently given rise to many more takes on “yes.” There’s “yeeeeees” and “yessssss” and their many variations, which take advantage of word lengthening to lend a sense of added enthusiasm to the traditionally neutral affirmation. There’s “yiss,” which was apparently originally uttered by the “mountie duck” in a Kate Beaton webcomic and which Urban Dictionary defines as “an excitable way of saying ‘yes.’” There’s “kewl,” a sensational spelling of “cool” (or, again according to Urban Dictionary, "a kewter, more klever, kewler way of saying 'cool'"). There’s “okie,” another playful misspelling, and “k” (“OK,” but more hurried or, depending on contextual cues, more passive-aggressive). There’s “kk,” arising from the gaming community as an abbreviated fusion of “k” and “kewl.” There’s “yas,” apparently of Glaswegian origins, another term with roots in gaming—and another one whose intentionally erroneous vowel functions as, effectively, an embedded exclamation point.

Originally published in The Atlantic by Megan Garber.

And there are also, of course, all the emoji that indicate enthusiasm and assent: the thumbs-up, the clapping hands, the prayer hands, the smiling face, the sunglasses-wearing smiley face, etc.

So “yes” has, basically, procreated: It has taken its own basic DNA and mixed it with other threads of culture, creating new words and terms and memes and pictograms that do the work of affirmation while also conveying secondary nuances: enthusiasm, hesitation, irony, delight.

On the one hand, that creates a universe of yes-ing that is so expansive as to be non-committal. The linguist Naomi Baron, a professor at American University and most recently the author of Words on Screen: The Fate of Reading in a Digital World, points out that relationships in general are becoming more fluid and less committal: Couples “hang out” rather than go on explicit dates; they live together rather than get married. People rent rather than own. Et cetera. All around us, Baron told me, we see the “diminution of readiness to commit”; the expression of yes via a slate of more ambiguous terms may well be a linguistic outcome of that shift. A question answered with a thumbs-up emoji or a “kk” or even a “y”? Those are ways of assenting without necessarily affirming. “I think this notion of going from ‘yes’ to less committal terms,” Baron says, “is one way of saying, 'yeah, it's okay, I'm not committed.’”

The flip side of that, though, is the affirmation that expresses overt enthusiasm and excitement and even joy. The distribution and dissolution of “yes” might have reached its apotheosis in “yaaas” (which is also written as “yaaaaas” and “yassssss” and “YAAAAAASSSSSS” and pretty much any other variation of those three ordered letters that you choose to type). “Yaaaas,” which functions as an affirmation and an exclamation and, occasionally, an adjective—“a sensible single syllable,” Refinery29 describes it, “that carries enough punch to make a statement, but enough sass to show you don't really give-uh-what”—rose in 2013 as the result of an Instagram video, now apparently lost to history, of a fan praising Lady Gaga. Popular in online drag culture since then, the term has recently come into more widespread use. It’s a regular tag on Instagram and Tumblr and Twitter. September’s “Yassss cat” Vine compilation has received, at this point, nearly 2 million views. In May of last year, Nicki Minaj and Soulja Boy released the song “Yasss Bish.” A recent episode of Broad City found Ilana teaching a kid she was babysitting the term “yas queen,” to fantastic effect. Along with “LOL” and "OMG" and “WTF” and "win," “Yaaaas” has become one of the pre-selected reactions Buzzfeed offers audiences for its stories.

“Yaaaas” and its fellow “yes” variants are, at the most basic level, the unsurprising results of a long-standing linguistic shortcoming: The word “yes” is an extremely dull way to express the varied sentiments of “yes.” And the Internet, as it is wont to do, solved that problem by creating new ones. The disruption of “yes” likely happened for the same reason that so many web-spurred language developments happen, which is that digital communication lacks the tonal nuances that spoken language does. And also that people are awesome and creative and really, really good at finding clever ways to restore that tonality. Vowel extensions, new words, the rise of emoji … these are all the results of what the scholar Walter Ong called “secondary orality,” the intentional fusion of spoken and written language. They allow us to substitute the organic nuances of the human voice with the clunkier tools of text. Is that a good thing? Yes. Is it maybe actually kind of a great thing? Yaaaaasssssss.

Originally published in The Atlantic by Megan Garber.