White Supremacists Fire On Black Lives Matter Protest, But Whose Side is Police Chief On? 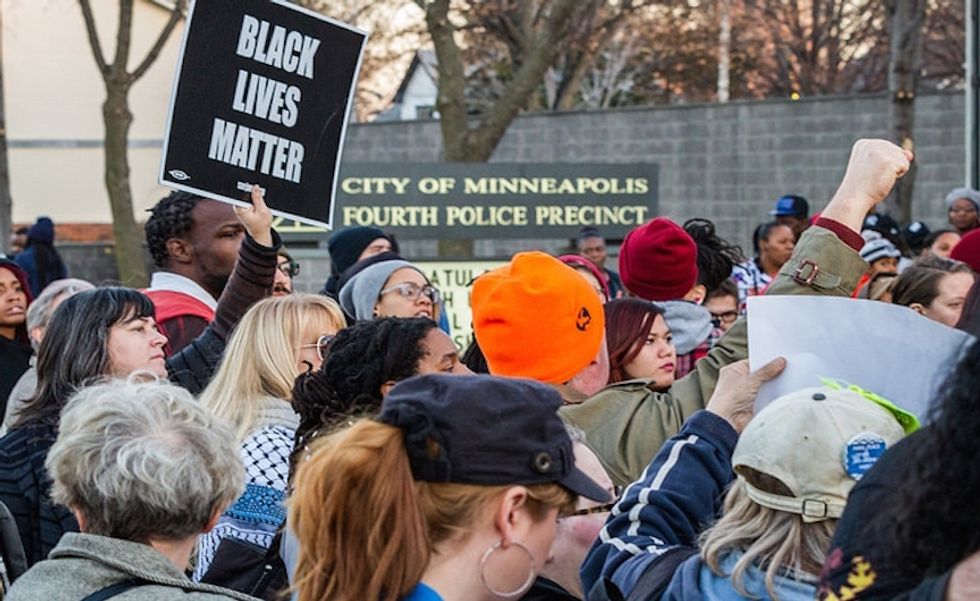 When five protesters were shot at a peaceful demonstration organized by Black Lives Matter and the NAACP in Minneapolis on November 24, the perpetrators were quickly identified with white supremacist views and organizations. Yet Hennepin County declined to charge them with hate crimes. The lead gunman, 23-year-old Allen “Lance” Scarsella, has been released on bail, despite video evidence created by Scarsella and his associates showing Scarsella using racial slurs and threatening to “cause commotion” at the protest.

Vice Magazine suggests that the shooter may also be part of the Sovereign Citizen movement, an anti-government movement that frequently also attracts white supremacists. Heavy.com reports that Scarsella’s Facebook profile photo is the Bonnie Blue Flag, which is associated with the Confederacy. His friends Nathan Gustavsson and Daniel Macey, and a fourth man, Joseph Backman, were charged with second degree riot while armed. “A group of white supremacists showed up at the protest, as they have done most nights,” Miski Noor, a spokesperson for Black Lives Matter, told the StarTribune.

The protest, staged in front of the 4th precinct police station in North Minneapolis, followed the fatal shooting of Jamar Clark, a black man who witnesses say was handcuffed and laying down at the time he was shot in the head by police on November 15. Police dispute these details. The protest took the form of a peaceful encampment that lasted until December 3, when the Minneapolis police department forcibly cleared the protest.

Protesters say Scarsella and his accomplices should face more serious charges, including attempted murder, domestic terrorism and federal hate crime charges. “We just feel like this is more evidence that the system does not work for black people to bring people that hurt us to justice,” Lena K. Gardner of Black Lives Matter Minneapolis told CBS Minnesota. “It fails us at every turn.”

In addition, many protesters claim that police failed to respond for 15-20 minutes to the shooting that took place in front of their station, and they are

calling for the ouster of police union chief Bob Kroll, calling him a racist and a member of a white supremacist motorcycle gang who protects bad cops. Kroll’s own record shows involvement in a number of violent interactions with people of color, including several that resulted in settlements to civilians. His lengthy disciplinary record includes civil complaints and lawsuits for wrongful arrest and excessive force, including an incident involving a police raid of an elderly couple’s home. Records show 19 internal affairs complaints against Kroll during his 26 years on the force.

Kroll has been an outspoken, often controversial figure, attracting attention for making comments about a gay member of Minneapolis’ mayoral staff and for calling U.S. Representative Keith Ellison, the only Muslim congressperson, a “terrorist.”

“We cannot have a blatant racist in this position, a position which he is paid for," activist Monique Cullers-Doty told City Pages. "If he wants to be a racist he needs to do that on his own time, on his own dime. We know who he is and what he's about, and it's not acceptable to us."